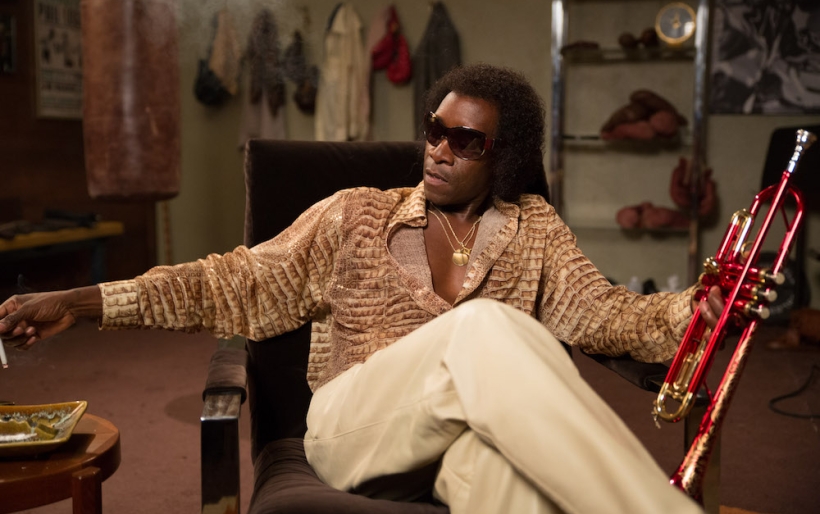 The idea of Don Cheadle playing Miles Davis has been floating around for at least a decade, ever since the legendary trumpeter’s son, Erin Davis, and nephew, Vince Wilburn Jr., proposed the idea while inducting Davis into the Rock and Roll Hall of Fame in 2006. The notion finally came to big-screen fruition this year as Miles Ahead, in a form different than anyone might have expected (it opens at the Ritz Five on tonight).

Doubling as director, Cheadle deviated from the standard biopic format to create a heist-movie fantasia with Miles at its center,aiming for the spirit rather than the factual reality of its subject. I wondered how the film might look to someone directly influenced by Miles’ music, so I invited trumpeter Josh Lawrence, co-founder of the Fresh Cut Orchestra and host of the Thursday night jazz series at Jose Garces’ Volver Restaurant, to attend a screening with me and discuss the film afterward.

The Key: You know the story and music of Miles Davis better than most people who will be watching the film. Given your background in jazz, what was your take on Cheadle’s interpretation?

Josh Lawrence: I was trying to watch it without that preconception. I enjoyed it as a film, maybe not so much as a biography of an artist. It’s interesting that Cheadle made that choice, but he sets it up at the beginning where he, as Miles, says, “Don’t do the Walter Cronkite shit. Give it some attitude. Give it some style.” I guess that set it up to be a more dreamy type of picture.

TK: Right. The whole thing takes place between the time that Miles lifts the trumpet to his lips and puts it down again, which sets it up as his own fantasy self-impression. Is there something in that approach that you feel captures the spirit or attitude of Miles?

JL: I think so. Hearing different versions of stories from different people and reading his autobiography, there does seem to be a tall tale aspect to the way that he talks about himself sometimes. To the extent of a caper film – I don’t know if I would go that far.

TK: Miles Ahead does offer a few glimpses of Miles in the studio or rehearsing with his great quintet, and is scored by a near-constant tapestry of his music. How did you think the music was depicted to the extent that it was?

JL: It felt almost like a backdrop to the story. It wasn’t in the forefront at all. If somebody comes into the film and doesn’t know anything about Miles, it might look like he was a superstar who was always messed up. I don’t think it ever really showed how much of an impact he had on music and what his art meant as it was coming out over all those years. It’s hard to depict that, but I felt like music was the subtext rather than the main subject.

TK: In a few places, Davis chews people out for dwelling on his past triumphs rather than keeping up with his ever-evolving sound, whether calling Phil Schaap’s radio show or glaring at a drug-dealing college student who only has his classic ‘60s LPs. Was that enough to give unfamiliar audiences a taste of his evolution?

JL: There’s a bit of that, but I felt like it was more about that idea of him trying to push forward into new things instead of actually showing what he was actually doing. There were a couple of moments where he was in the studio with Gil Evans and you see him arranging at the piano and making changes to the score, which was cool, but you never really saw the process of him actually creating music.

TK: Has there ever been a film that you think accurately depicts jazz?

JL: I love [Spike Lee’s] Mo’ Better Blues, though that’s not a true story. The feeling of that movie is great. The biopics, not really. I didn’t really like Bird; it was good, but it was more about Charlie Parker being a junkie rather than how much time you have to put in to be that type of person, which isn’t an easy story to tell.

TK: Is that difficulty inherent to jazz, or does it apply more broadly to music in general?

JL: There’s nothing glamorous about the process of creating music. It’s just people practicing and putting in work. That’s not something you can really show that will keep people interested. They’re two conflicting mediums. But you can capture the essence of the music sometimes, and I think that’s what Cheadle was trying to do with this movie. He was trying to get that electric quality of Miles’ music.

Miles Ahead is showing now at the Ritz 5; showtimes and tickets can be found here.