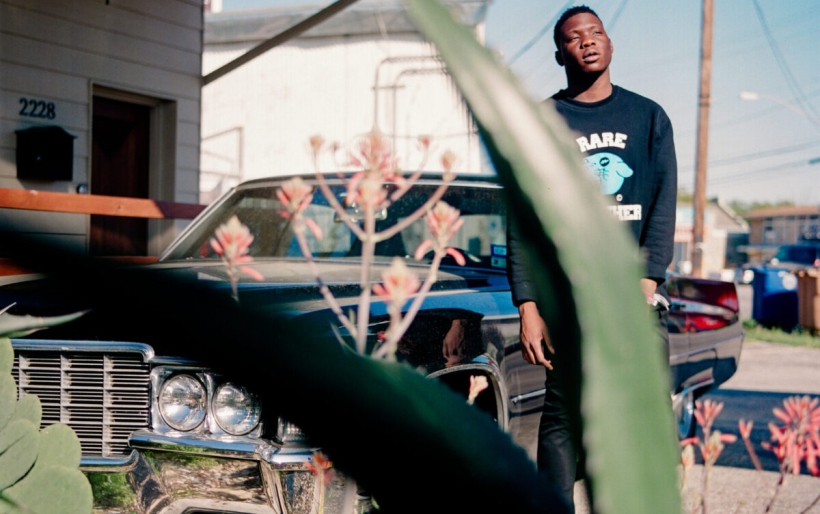 We’ve been fans of Philly rapper Tunji Ige here at The Key ever since first putting our ears to The Love Project, his debut mixtape that dropped in late 2014 when he was 20 years old. He’s an MC at heart, but paints his music with a broad brush – it incorporates elements of dance pop, psychedelia and experimental rock. A couple years down the pike, we’ve been totally enthralled with the direction he’s taken his career, from gripping music videos with longtime collaborator Glassface to guest spots with emerging Parisian pop outfit Christine and the Queens.

This spring, Tunji dropped Missed Calls, a seven-song set that you can stream below. Is it an EP? Is it a full length? I don’t know, but it’s good. We caught up with him on the phone last week, and basically asked him everything we’ve wanted to know more about over the past two years. Read our interview below, and catch Tunji tonight when he opens the show at Underground Arts for JUMP Philly’s Red Bull Sound Select party.

The Key: Congrats on Missed Calls, it sounds sick. With it being the first major release you’ve done since the success of The Love Project, did it feel different going into this one?

Tungi Ige: Yeah; it felt like a real debut. The Love Project was a lot of things that I was trying to emulate, things I was just trying to do a test and feel out, that I was trying have fun with, just to make songs that I like. Whereas Missed Calls is more like a cohesive body of work, more of a project. Going into it, we stopped using samples as much, and things of that nature. I wanted to make really cohesive music to stand the test of time.

TK: Did fact that people reacted so positively to The Love Project take you off guard at all?

TI: It took me off guard a little bit. I thought it was gonna do something, but like, it definitely…it was tight because the way it happened, it was a body of work that proved I could be way more.

TK: I’m a fan of how much collaboration you do, particularly the track with Christine and the Queens, “No Harm Is Done.” How did that come together? And in general, and how do you feel collabs relate to your work overall?

TI: The Christine and the Queens record came about from, basically, me and Christine met through her dancers putting her on to “For Us,” which is the intro track from The Love Project. Christine wanted to reach out to collaborate for her American release, so we ended up going into the studio in New York, in Manhattan, and basically recorded “No Harm is Done.” Noah Breakfast was there, and it was originally a beat that I started and then he flipped, and then ended up being something she took back to France and got some of her engineers and producers to add on to it on well, and then wrote lyrics for it. And then basically in a month, we made “No Harm is Done,” did the video in Paris, and I’m really happy with that collaboration, because of the kind of artist that Christine is: she’s very punctual, very serious about illustrating her whole vision. And I’m there as well, that’s the level I’m trying to take things to. It was very mutual.

TK: You talked about beats starting in one place and getting shaped into something else as your collaborators get involved. With Missed Calls, did all of the beats originate with you, or did they kind of start collaboratively as well?

TI: All of them started with me, except for “War,” which was produced by Noah. But all of them are originally my demos and we took them to another level. And we sat down and went back and forth to produce. Although, a lot of Missed Calls was made with collaboration in mind. So these songs are the foundation. It could be various parts of another song, or remixes that stem from them. And that’s where we’re at right now going into the next project.

TK: So when you’re crafting the song, you’re allowing yourself space to say “more is going happen with this at some point”?

TI: Definitely. I construct songs with certain things in mind, I construct songs with certain people in mind. It’s how I want to enjoy what I’m making. Taking all those aspects and putting them into one was Missed Calls. I keep that all in mind, but I still wanted it to be me, and just be a cohesive project and seen as solo work. It’s the first thing I want people to access, major distributors and stuff like that, I wanted it to be like “if you want to know about Tunji, listen to Missed Calls.” And that’s where you start at.

TK: I wanted to ask you about the video you did a while back, the “Ball is Life” video. First of all, thought it was an awesome concept for the video, the idea of you watching the video on your phone, seeing how the video plays out, and the pulling out for a moment when you take the headphones off. I thought it was so cool. How did that concept come about?

TI: I was trying to paint a picture of the whole song. There’s a peak in the song, a crazy intro, and some very cinematic stuff. So we knew we had to do a very cinematic video for it. So we filmed it in upstate New York, me literally leaving from home, escaping from this girl, “nah, I’m stepping a new light.” Which was Missed Calls: stepping into being on mad interviews, and doing mad press, doing shows and being in crazy studio sessions, stepping into the light of being an artist. And that’s what “Ball is Life” is, the escape from that. That’s what we wanted to illustrate in the video; we filmed in upstate New York, Philadelphia, and New York City

TK: You worked with Glassface in another video. What do you like about collabing with him?

TI: Yeah, Josh is my go-to. He’s been working with me, we’ve been working on visual collaborations since I was like 15, 16. We have a rhythm as far as we work together and how we collaborate, and it’s been expanding over time. So we did “Ball is Life,” we did “Everyday” we did “On My Grind” we did a bunch of other things. So yeah, he’s my go to for visuals.

TI: I think it’s reflective mostly of my listening preferences. But in 2016, that does work as well, because that’s what a lot of people are shifting towards, especially in rap. A lot of low end filters, a lot of 808s, a lot of dark synths and things in that range. But for Missed Calls, it was more so touring with certain influences, whether they be Radiohead, or Tame Impala as far as the drums on “Fired Up,” or Jai Paul and “War.” Things like that, things that I’m into: Boards of Canada or Vybz Kartel on “22,” just very spacious and different lush sounds that I feel like aren’t really put into hip-hop as much. And I wanted it to be a sonic soundscape and wanted the lyrics to complement that. So it’s a lot of hidden things that you’ll have to sit with to hear, but a lot of things that you can just get right away at the same time. And that’s what I wanted it to be.

Tunji Ige performs tonight at Underground Arts for the Red Bull Sound Select show; tickets and more information can be found at the XPN Concert Calendar.