BalletX is modern dance for the Spotify generation - WXPN 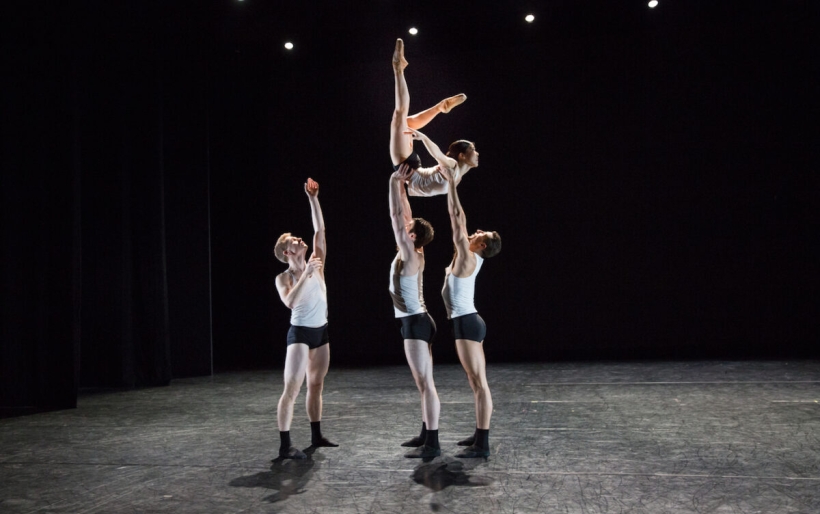 BalletX is modern dance for the Spotify generation

“I hope you’re having fun,” Christine Cox told a packed house at South Broad Street’s Wilma Theater on Thursday night. “We hear that people tend to have fun at our performances.”

The co-founder and executive artistic director of Philly’s BalletX picked an opportune time to make this observation; company dancers Francesca Forcella and Zachary Kapeluck had just spent the four and a half sexy minutes of Rufus and Chaka Khan‘s “Tell Me Something Good” comically bopping and grinding on the Wilma’s minimally adorned stage, a bored couple trying to throw some spice in their humdrum domestic life. It was one of the most overtly funny – and most successfully fun – ballet performances I’ve ever seen, and the crowd was still chuckling in response.

The piece, I Like You Different, was first performed by the company in 2007, with Cox herself dancing the female lead. “We came up with that late at night at the Pennsylvania Ballet, when we were exhausted. It’s good to see it again.”

In my notebook, I wrote “FUNKAY” in all capital letters in response to Like You; I don’t know if that word has ever been used in a ballet context, but that’s kind of the point of BalletX. It uses the formal, traditional rigors of classical dance training as a launching off point to challenge convention.

This is ballet for the Spotify generation. It’s exciting, eclectic and vibrant moreso than dusty and antiquated; there are no pastel tutus and grandiose theatrical sets here. At the same time, it’s also a contrast to those modern dance programs that are confrontationally unconventional; it splits the difference and manages to be accessible and engaging rather than perplexing and intimidating for newcomers. And its use of music is totally a part of this.

For BalletX’s Spring Series 2016, running through Sunday at the Wilma, the company performs 10 pieces from its 10-year history, retrospective style, and they strike a variety of moods, from serene and sublime to pensive to melancholic to laugh-out-loud, all set to a great soundtrack.

The opening Frequencies finds three dancers in angel wings beautifully taking turns pairing off in an otherworldly love triangle set to Jump Little Children‘s “Cathedrals.”  Broke Apart sets the score with Joanna Newsom‘s “The Book Of Right-On” and uses minimal setpieces – dance bars arranged to form a boxing ring-esque square – to create a space for Skyler Lubin and Richard Villaverde to have a cat-and-mouse game of attraction and repulsion (the latter clad in a Marlon Brando tank top no less, dragging Lubin around the floor).

The Last Glass, performed with the full ten-member company, sets a pastoral summer’s day dance party to Beirut‘s “Elephant Gun,” and it’s amazing to see how the right combination of outfit and lighting can totally evoke a rural pasture on what is essentially an empty stage. In this number, the couples playfully bounce back and forth to the sounds of accordion and flugelhorn; with the exception the one lady who nobody wants to dance with. From my notebook: “OH NO ALL OF HER FRIENDS DITCHED HER.” Funny / sad. BalletX | photo by Alexander Iziliaev | courtesy of the artist

In an flip of the opening number, Beautiful Decay brought a trio out on stage – two men and a woman this time – bonding across the space in incredible feats of flexibility to Ólafur Arnalds‘ “Old Skin.” The nature of human connection seemed to be the underlying theme in the pieces chosen for this retrospective, whether the characters are friends dancing or lovers knocking boots or enemies knocking each other to the floor. The music wasn’t exclusively somebody’s ultra-hip playlist, however. Castrati was a sensual, caress-filled dance set to a drifting cello piece by George Frideric Handel, while the remarkably choreographed full company closer Gran Partita was set to the music of Johann Sebastian Bach. It was the most traditional moment of the night, but one of the most stunning as well.

A fifteen minute intermission took us to the premiere of Time Curves, a new piece by choreographer Kevin O’Day. This approximately half-hour piece was decidedly more intense; if the retrospective program was loosely about sex and playful human connection, this seemed to be a more deeply conflicted piece reflecting on ideas of god, spirituality, and existential concerns. The company moved around beneath a monumental hanging that spun around the stage and looked like something between a lawn chair and a cross. It was clearly a source of idolatry for the people beneath, who huddled and contorted in terror, flailed in devotion, raised one of their own skyward to touch it – possibly a representation of human hubris in challenging the divine – and then devolved into infighting and self-destruction. Again, we see some of the women getting dragged across the stage – there’s an unsettling taste of violence throughout.

But most compelling in this is the music, which is wildly unconventional. O’Day told a Q&A group before the performance that the lone accompanist – Wendy Sutter – has her playing digitally treated by composer and sound designer John King. “What John is extremely successful with is elements that are of technology but have an acoustic existence,” says O’Day. “So you’re hearing her bowing, but then there are other elements involving the playback, and you can’t tell where that line is. There’s lots of blending.”

True, there was a bit of an Aphex Twin vibe as notes she played were echoed in pitch-shifted reverberations and that decayed and bounced across the left and right sides of the theater. This created a trance-like atmosphere to match the dreamscape on stage, but Sutter’s playing also took more conventional turns. At one point, it was a bluesy-sounding progression, incorporating quarter tones and half tones on her cello in a drawling melody that sounded practically like a harmonica. Later, it dove into fierce heavy metal riffage for the final third of the piece. If you had told me she was actually playing Mastodon covers during this point, I would have believed you, and when she raised her bow at the end of the night, strings and sinews of hair were blowing in the fan-generated breeze.

While Time Curves is the centerpiece of the program, and it undeniably lands in the territory of somewhat intimidating modern dance that I spoke of earlier, it is nevertheless a gripping experience – even for a non-connoisseur. And juxtaposed alongside the less aggressive pieces in the retrospective portion of the program, it’s balanced out while also put into context. Bottom line: BalletX is all about advancing the conversation and championing world class, contemporary choreography, right? In that sense, it’s saying you don’t need to first draw in your audience with sure-fire crowd pleasers from 124 years ago – sometimes, when matched with the right soundtrack, a piece from this young century can be the perfect gateway into a wide-open, exciting world of modern dance.

BalletX’s Spring Series runs through Sunday, April 24th at the Wilma Theater; tickets and more information on the performance can be found here.