April is an unpredictable time of year – one that can bring sunshine and pastoral days as readily as storms and flooding. And sometimes, per the late great Prince, snow. As I write this, I look outside the WXPN office window and the skyline is grey and filled with drizzling clouds, and I wish in the back of my mind that the climate wasn’t such a bummer today. Thank goodness for music; particularly summer-y music; particularly Bob Marley.

The king of reggae performed in Philadelphia forty years ago today. Electric Factory Concerts brought him to the Tower Theater for two sets, one at 7:30 and one at 11 p.m.

Marley was just about to release Rastaman Vibration, his seventh LP. He had also been on an incredible run of albums between Natty Dread, Burnin’ and Catch a Fire, the record that really broke him out in the United States. Many of Marley’s classics could be found in this setlist – the breezy, psychedelicized “Stir It Up,” the playful “Kinky Reggae,” the meditative “Rastaman Chant,” the rebellious character study “I Shot The Sheriff,” the stunning social commentary of “Concrete Jungle.” 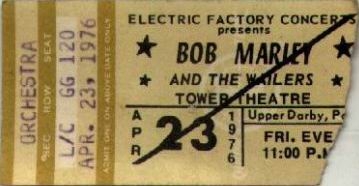 The latter two songs are significant inclusions, as Marley by the mid 70s was beginning to truly embody his role as not just a sunny day pop songwriter but someone who sang passionately about social justice, standing up for the working man and the oppressed.

Though his performance and set is undeniably bright and uplifting – and will do wonders to chase away your grey Saturday feels today – it does not shy away from a message, and Marley using his art as a force for change.

Below, listen to an excellent soundboard recording of Bob Marley and The Wailers’ April 23, 1976, and read the setlist below.