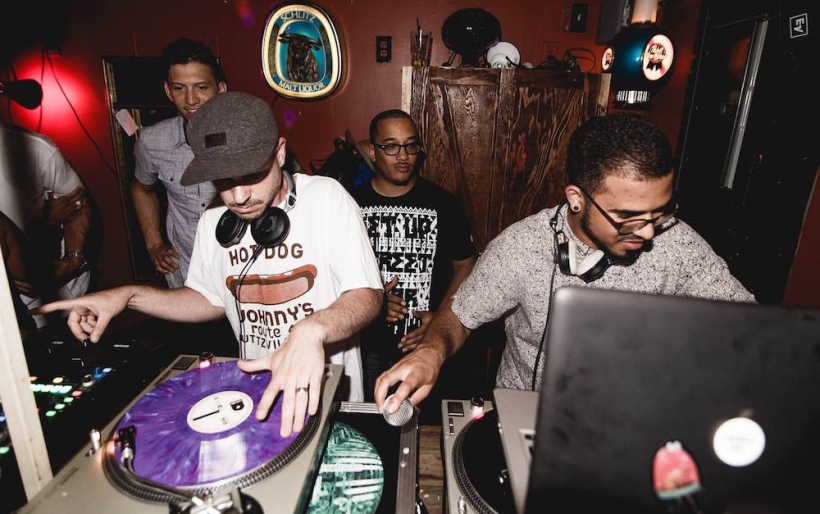 Illvibe Collective is easily a hometown favorite when it comes to Philadelphia’s DJ scene. The group is known for their dance parties, where they spin music ranging from soul to hip-hop, b-boy anthems to funk. On April 29th the team is celebrating the 15 year anniversary of their most popular event, BODYROCK, at Ajax Hall at The Fillmore.

For those who are not familiar with Illvibe Collective, the members include Mr. Sonny James aka Statik, Lil Dave, Skipmode, Panek, Matthew Law, and DJ Philly Blunt. Rarely do all six guys get the chance to spin together due to hectic national and international touring dates, as well as local residences. BODYROCK is one of the few times where the collective is able to come together and show out as a unit. BODYROCK got its start in 2001 at a dive bar called Aqualounge located in Fishtown. That particular area was a far cry from the social hub that we recognize Fishtown as today. Because of this, it was difficult to get folks to the party.

“This was back when that area was just considered North Philly, it wasn’t the ‘cool place to be’ like Fishtown is today,” says Lil Dave. “There wasn’t much else happening in the area at the time.  We had to work hard to get the crowd there, but it got a dedicated following really fast.  This party has always played a special role in the nightlife scene in the Fishtown area, so it’s great that we are bringing it back home for the 15 year anniversary.”

Great music, great DJs, and a great people are the main ingredients for creating a dance party with staying power. Over the past few years BODYROCK has brought out crowds of people who were looking to sweat it out on the dancefloor. This is a party where professional and recreational dancers alike are able to get free and show off their moves. By the end of the night everyone is smiling and drenched in perspiration.  Much of the success of BODYROCK is due to the regulars who attend.

“Honestly, BODYROCK wouldn’t have lasted this long if it weren’t for all the people coming to support,” says Lil Dave when asked about the longevity of the event. “We have many dedicated regulars who have follow the party since the beginning.  They constantly bring new people which keeps the energy fresh.  BODYROCK feels just as fun now as it did when it first started.” According to Lil Dave, the most popular BODYROCK event was their tribute to Native Tongues. Themed nights are a rarity in Illvibe Collective, but this one, the guys believed, was too good to pass up.

“The party was unreal.  The line was down the block and the place was packed tight with people singing along to every lyric,” he remembers. “It was like church!  Bodyrock has always been a party that maintains a family vibe, but that night everyone in that room was in tune with each other on a higher level.  People danced so hard, that by the end of the night folks were literally worn out and laying down in the middle of the dance floor, exhausted.  The walls of the place were covered in sweat. That was a special night!”

The 15 year anniversary for BODYROCK is Friday April 29th at Ajax Hall at The Fillmore. This party will include a set from internationally recognized DJ Day.

“Since this is a special night, we are flying in one of our favorite DJs from the West Coast,” explains Lil Dave. “DJ Day is a DJ/producer from Palm Springs, California who is a seriously talented, internationally known party rocker.  He’s made a lot of noise from spinning some of the craziest sets at the world-renown Do-Over party, as well as producing a bunch of amazing albums, remixes, and edits.  If you come out, then you are in for a treat!”

Up until very recently, Kung Fu Necktie has been the home for BODYROCK. Briefly, the party took place at Franky Bradley’s. When asked if Ajax Hall at The Fillmore will be the new home for BODYROCK, Lil Dave suggests that we “stay tuned.”

“If you have never been to a Bodyrock before, than you will find yourself partying with one of the best crowds in the city,” says Lil Dave. “As usual, my DJ crew, Illvibe Collective, will be playing a timeless selection of music that is rooted in hip-hop but expands into dancehall, house, R&B, funk, and much more.”

BODYROCK takes place Friday, April 29th at Ajax Hall of The Fillmore; for more information, check out the LiveNation website.