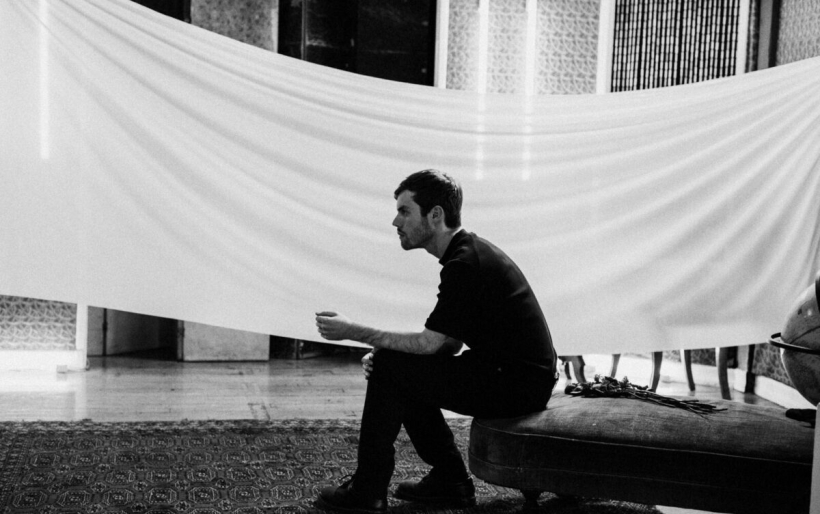 Wild Nothing | Photo by Shawn Brackbill | courtesy of the artist

A brief pause of life with Wild Nothing’s Jack Tatum

Jack Tatum thinks himself less as a real musician than a fan and student of music. As Wild Nothing, he communicates what he’s learned and loved about pop-rock greats like Fleetwood Mac and The Cure with crystalline clarity. Never has that love sounded more cinematic than on his latest record, Life of Pause. He’ll be presenting Pause live this Saturday at 714 as an all too fitting soundtrack for the Making Time Sweet Sixteen Party. Beforehand, I caught up with Tatum to chat about the album, how the sound of Philly influenced it along with many others, and what not to call his music.

The Key: I was excited to read that you listened to a lot of Philly soul leading up to and during the making of this record!

Jack Tatum: Yeah, it’s sort of an indirect influence. You can definitely hear it in certain songs. To me, songs like “Whenever I” and even “A Woman’s Wisdom” pull from it. I’ve also always been infatuated with soul music and even reinterpretations of soul by people like Todd Rundgren, and David Bowie with “Young Americans.”

JT: Yeah! There’s a lot of great Philly soul music that I love. There’s this one band called Blue Magic. They have some really awesome stuff. They have this one album called Thirteen Blue Magic Lane that’s sort of Halloween themed. It’s likes spooky soul that’s really good. You should check it out.

TK: In addition to the Philly influence, you also recorded in Sweden with John Eriksson (Peter, Bjorn & John) and L.A. with Brad Laner (Medicine). How did all of that seep into the record?

JT: Well we started in Sweden, where I had demoed a lot of rough songs. John was really well-versed in minimalist instrumentation and figured out how to add little orchestral touches to songs, like the marimba in “Reichpop,” which at the time I wasn’t sure would be on the record. The majority of the record was done in Los Angeles, though. Being there probably had the most influence on the record. In some ways, this record feels like the lightest, happiest Wild Nothing record. It feels very open to me.

TK: If definitely has a sunnier quality.

JT: Yeah I didn’t even think of that while I was making it. It’s just how it happened. It seems cliché but being in Los Angeles seems to have had something to do with that. It was just cool being out here with producer Thom Monahan. He has a lot of feelers out so we were able to bring in back up singers, saxophonists, and other drummers to just try stuff out. He’s friends with Brad Laner, who just casually dropped by and set up his insane pedal board to play guitar. It was just really fun.

TK: You mentioned going into all of this with a lot of rough forms for songs. Do you go into every record with a lot of songs like that?

JT: Not a ton. I always end up with a million ideas. I know that there’s an album there, and there’s usually this buffer there of five songs that get dropped along the way. I have a lot of 30 second ideas along the way but I self-edit a lot.

TK: You seemed to take your time with this one compared to your output in the past where you were fairly prolific, putting out an album or EP every year.

JT: Yeah, it wasn’t totally intentional. I kind of needed it, though. It was the first time I had stepped away from it all. We did a lot of touring after (2012’s) Nocturne came out, and even up to when I released the Empty Estate EP. It’s pretty easy to burn yourself out. I was anticipating taking a break for a little bit because I felt like I owed myself some time just to figure out the next step. I knew right off the bat that I didn’t want to just churn out Nocturne: The Sequel. It took a little time to figure out what that meant.

TK: It’s funny because ever since you started, you’ve been one of those artists who have had a permanent word cloud of descriptors follow you around—dreamy, romantic, etc. Are there any words that you’re tired of having used to describe you?

JT: Not necessarily. When I first started this project, I totally embraced most them because I always wore my influences on my sleeve. The only thing that does bother me is when people call my music “lo-fi” and don’t seem to know what that means.

TK: That term seems to have become a backhanded compliment.

JT: I just think it’s sort of transcended what it actually means. People think of it as a genre now just because so many people were doing bedroom recording stuff when I started.

TK: It’s funny that it stuck with you because you very quickly evolved out of that bedroom.

JT: Yeah. On the one hand it’s cool that so many people are able to just make stuff at home. Then there’s this part of me that’s still infatuated with the idea that I can make these big studio records and there are people who can make that happen for me. I kind of feel an obligation to always make the best sounding records within my means. This record is probably the height of that ambition in some ways. I’m extremely proud of it.

TK: How will the new songs reconcile with the older ones live?

JT: Well I guess we’ll find out! We’ve been rehearsing a lot. It’s interesting. In my mind, they all make sense together just because I wrote them all. I can personally trace the connection between them all. Whether other people can, I don’t know. I just love having more material to pull from in a performance each time, and having fans that look forward to older ones.

TK: You’re coming to Philly on this run of shows. You’ve actually been here quite a few times. What do you enjoy about Philly?

JT: I love Philly. I’ve actually spent a good amount of time there because one of my best friends from college grew up in Drexel Hill and lives in South Philly. It’s a great city. I also love playing a different place every time we come through.

Wild Nothing performs Saturday night, May 7th, at 714 for Making Time; tickets and more information can be found here.