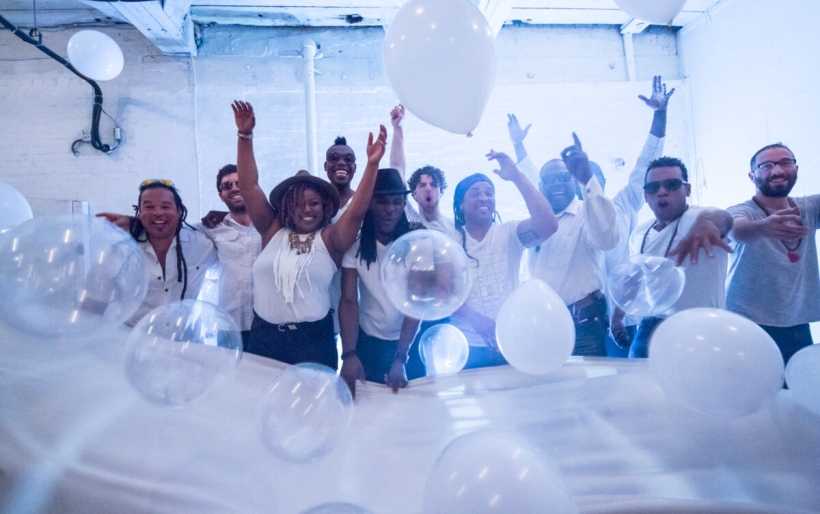 Worldtown Soundsystem | Photo by Charles Shan Cerrone | courtesy of the artistOver a dozen people comprise Philly party collective Worldtown Soundsystem, and the crew has made a huge noise bringing sounds and rhythms from around the globe to the Philly party scene. With the band celebrating its fifth anniversary this Saturday night at The Fillmore, we sat down with founding members Ben Arsenal, Gary Dann, Jonifin Marvin, Femi Oluwafemi, Jules Starr to talk about how Worldtown got here and where it’s going.

The Key: Could you give me a little insight into the founding of Worldtown? Who linked up with whom and under what circumstances?

Femi Oluwafemi: Sooooo, Five years ago Ben and I had already thrown a few parties together when we (and a couple of other awesome folks) got the idea … that would break international music to the party people. Ben was already producing house music with international influences at our makeshift playground,­ his apartment at 8th and Norris. This party was known as Worldtown

Ben Arsenal: Femi and I met at a BBQ party through some friends on a rooftop in West Philly. It was pretty much the same vibe [at the beginning] as it is today, mixing music and live drums. We started to collaborate, throwing parties with a live element…then took it to the clubs downtown. A year after our first club date we did the first year anniversary at The Boom Room. I started working with Jules in the studio about a year later and he insisted that Gary join the band and we make an official member line up.

Jules Starr: At the same time, Gary and I were doing a session called music church at The Boom Room.

BA: Our first show as this line up was Halloween 2013 at Studio A in South Philly. It was a pretty rocky set but we learned some hard lessons and got it together. Since then we’ve been rehearsing every week.

TK: Ben Did some of that initial difficulty revolve around integrating live players with DJs playing pre­recorded music? That’s not an easy thing to pull off.

BA: Definitely, we learned the hard way about the importance of the drummer, Gary, and the click track! One of the most important elements of staying locked in the groove.

TK: That idea of fusing DJs with live instrumentation reminds me of parties like King Britt and Dozia’s legendary Back 2 Basics in Philly. Did that party have any influence on what ya’ll were doing?

Gary Dann: That party changed my life when i was like 21. King Britt. Chuck Treece was there. All these cats that were sick that I looked up to. And that I get to work with now, thankfully.

BA: I wasn’t around for that quite yet. The two reasons for bringing in live musicians were, one, we loved the vibes at the house parties we started spinning at where people would drum along – it’s awesome, live, raw energy! And two, we got sick of the DJ ‘performance’ and wanted to do something bigger and more engaging. Don’t get me wrong, I love DJing and it’s still a huge part of what we do. But we wanted to kick it up a notch.

JS: On top of it all is Femi bringing color from a visual standpoint which makes people connect on diverse multisensory levels and makes us what we are.

TK: Nice! When and where did the idea come in to incorporate the visuals? Ya’ll do live projections during your performances, right?

GD: Femi is the grand zen master art director of the crew. I’m constantly in amazement of his work and collaborations. I love how at our rehearsals, he is there too all set up with his laptop up and his Wacom pen stylus and sketchbook. He is right there creating with us every week.

FO: Well we already had a strong visual element through our flyer, poster and tee graphics. The next logical step was to incorporate that more into the experience. Two and a half years ago, during the Elevate studios anniversary, we paired up with some really awesome veejay / production guys and they really showed us an example of how dope it would be.

JS: And now, beyond projection, we are beginning to work with architects and engineers to develop three-dimensional design and build elements to the Worldtown experience, which we are incorporating in the Worldtown festival experience throughout this summer.

TK: Word. Could you tell me a little about what you have in store for the Fifth Anniversary party on Saturday?

Jonifin Marvin: We trimmed some fat in our set list. We’re incorporating Brazilian Percussion for the anniversary. We’re at a point where we’re challenging ourselves to turn out performance to a show with various dynamics instead of simply running off a list of songs for the audience. People will see some of that on the 14th.

BA: We also are going to pre release our EP, which will be out June 9th. It will be available on Worldtown USB drives. It’s self-titled, Worldtown SoundSystem. Our first single “Testify” is one of five of the tunes.

TK: Testify is a great tune. The production reminds me of some old 90’s house producers like Full Intention or Mood II Swing. Really dope vocal too.

JM: We love performing that song.

GD: (Vocalist) Zeek (Burse) is on fire on that one.

TK: What else does Worldtown have lined up for the Summer?

JM: Aw shit! We have such an awesome summer lined up.

FO: This summer, Worldtown is taking our band, deejays, and our awesome festival camp called the WT Village to three big festivals: Freeform, PEX Summer Festival in Maryland and Gratitude. Then the band is playing at Jazz On the Avenue and at a few other special events. Thennnnnn…drumroll…we’re going to throw our very own festival here in Philadelphia! August 6th, the first Saturday of the Olympics.

FO: It’ll be going on all day and features bands and deejays representing the globe, artists, dancers, painters and vendors that show the rich mix of culture in Philly.

TK: Word! Is the festival going to be an annual thing?

JS: It’s our second, first was the World Cup edition, two years ago at The Piazza.

FO: Our goal is to make it annual, and also take it to different cities around the world.

Worldtown Soundsystem’s Five-Year Anniversary Party happenes at The Foundry of Fillmore Philly, this Saturday, May 14th. Tickets are $10 before 11pm, $15 after, more information can be found at the XPN Concert Calendar.