Don't You Forget About Me: The Snow Fairies - WXPN | Vinyl At Heart 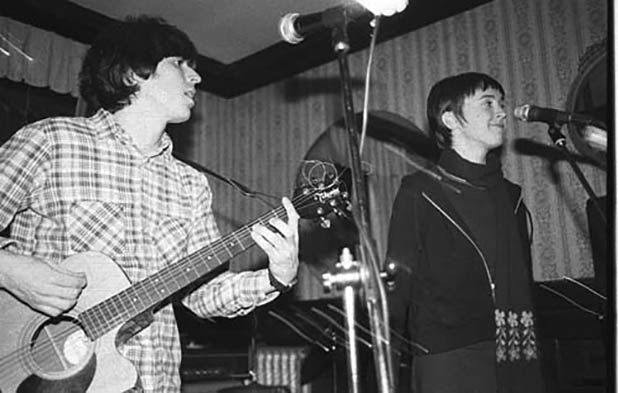 Don’t You Forget About Me: The Snow Fairies

Bands come and bands go, and in a decade and a half of covering the Philadelphia music community, I’ve seen innumerable bands come and go. Many of whom were quite incredible. Many of whom should be heard by new generations of local artists and local listeners. And fans of good music in general. Our new feature, Don’t You Forget About Me, dives into the smoky venues and dusty record stores of Philadelphia past to unearth the music and memories of artists you need to rediscover.

Our story opens on a tiny stage maybe six inches off the ground, wedged in between a street-facing window and a deep red wall decked out with kinky artwork. Lagers are swigged, empties are discarded on the floor, pirogies are fried up in the back. And amid that musty conglomeration of stale cigarette smoke and dried-up beer and onions and whiskey – old timers, by now, probably know I’m talking about Tritone at 15th and South, not a faux-dive but a Dive in the truest punk rock sense – we see five polite twentysomethings with colorful instruments standing onstage.

Or seemingly polite, anyway. “We’re the goddamn motherfucking Snow Fairies,” barks bassist / songwriter Neal Ramirez before the band kicks into “Water and Beer,” a song from their 2005 sophomore LP Get Married, of which they’re onstage celebrating the release. It’s his first song for the SFs singing lead – a duty handled with class by Rose Bochansky up to this point…and for that matter, after this point too – and it’s a minute-and-a-half blast of amplified rockandfreakingroll.

Ramirez’ voice takes a stratospheric leap in pitch and fervency; he chucks his instrument against the wall and grips the mic in his hand. He screams about junk food and drinking Coca Cola till his nose bleeds. He steps off the stage and buts heads with the people in the front row. He knocks over a chair drops the mic on the floor and falls into the drums. Or maybe not. I was there but, you know, beer. Whiskey. Cigarettes.

This was just one moment in a catalog of understatedly memorable performances by The Snow Fairies, one of the funnest Philadelphia bands of the early aughts – and one that thankfully returns, albeit briefly, for a Space 1026 show this Friday, ahead of a NYC Popfest gig on Saturday.

The band was rooted in the indiepop innocence of Belle and Sebastian and Daniel Johnston and The Vaselines. They also warmly embraced the DIY underground, as personified by The Aislers Set and Softies and The Cat’s Miaow. They wrote hooky songs with catchy drumbeats and synthesizer leads. They got called “twee” a bunch, sometimes disparagingly, more often endearingly. They once let me run around their North Star Bar stage setup shaking a tambourine. 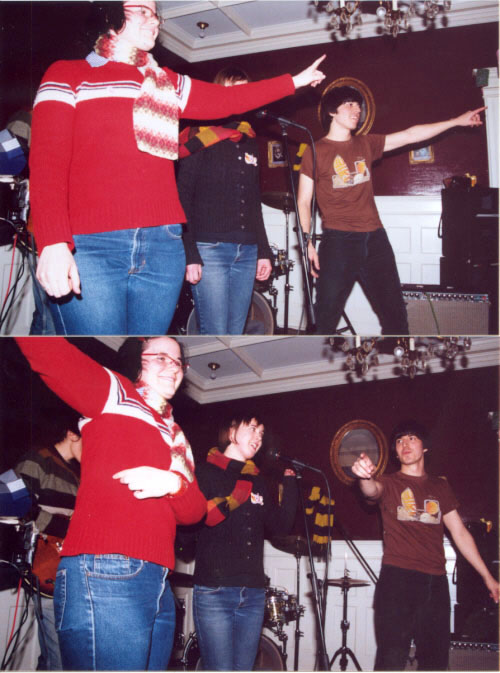 Choregoraphy and all, The Snow Fairies cover “Firefly” by The Cat’s Miaow at Red Square | photo by John Vettese

Bochansky and Ramirez — who, full disclosure, is a old and dear friend who I went to Temple with, worked at City Paper with and who DJ’d my wedding…so you know, some bias here, but I’d love his music even if he was dick. Which, thankfully, he couldn’t be farther from. Anyways… —  founded the band in the winter of 2000 along with co-guitarist-songwriter Jayme Goukas (now of Glitter) and Joel Tannenbaum (of Plow United and Ex-Friends). I’m pretty sure their first gig was at or adjacent to a New Years’ party at Red Square, a West Philly spot on 46th Street between Walnut and Locust. This was their base of operations, and housed a K Records-esque circle of artists and producers and, eventually, a record label.

All of the bandmates had previously been in a like-minded group called The Skywriters; within their first year of existence, Justin Staller stepped in on drums as Tannenbaum headed out to grad school, and Melissa Kramer joined the ranks on keyboard, adding a bubbling pop texture to the band’s heretofore ramshackle songs, and stepping up production and arrangements in a big way.

Over time, I saw The Snow Fairies play living rooms and bars, at alternative spaces like Fake House and The Ethical Society basement, at Ladyfest in The First Unitarian Church. I saw them act as the backing band to a Bryn Mawr College production of Kurt Weill’s Three Penny Opera – video of which is tragically not on YouTube. In 2002, they went as The Ramones for a Halloween house show at 49th and Hazel, the year Dee Dee passed away. Ramirez, as bassist, filled the role of Dee Dee, and closed the set by taking a dramatic fall to the hardwood floor as the band chugged along around his un-corpse feverishly. This was more tasteful and light-hearted than it sounds typing it out and, again, video is tragically not online.

Beginning in 2001 with a self-titled EP on Frazier Park, CA micro-label Blackbean + Placenta, the band channeled its affection for fuzzy lo-fi recording and vintage pop whimsey into musical gems that lasted only a minute or two. Get near the three-minute mark and you’re approaching prog, after all. The first song on the first record was a literal greeting: “Hi. We’re The Snow Fairies / we came to play our music for you. / Please don’t be intimidated / we’re everyday mythical beings just like you.” It was something out of The Monkees, something easily mistaken for an uncovered 60s nugget on a Wes Anderson soundtrack.

2002 saw the release of the delightful Feel You Up on Red Square Records. Remember that stepped-up sense of synthpop arrangement and production that came when Kramer joined the band? It’s on full display here, joined with less kitschy, more sophisticated songwriting from Goukas and Ramirez, the nuanced “April Flowers” gliding into the anthemic joy of “Cutting A Rug With You.” The latter is a glorious ode to nights spent on the floor at Sorted, holding your crush and moving to the beat as the DJ mixed up the spectrum of 80s dance music (“you wish they’d play Gang Of Four / I’m waiting for George Michael”) and you never wanted it to reach closing time. Oh, to be 23.

Most memorable, for me anyway, is the roadtrip riff-rocker “El Misisipi,” which reads like a breakup song, but more like a breakup with a childhood mate, or family member or somebody you’ve just drifted apart from over time. “You were my best friend four years ago, but that’s inconsequential / I wouldn’t be your best friend now if you paid me.” Lyrically and energetically, it’s The Snow Fairies’ moment most indebted to the Mozfather, and I mean that in the best possible way.

In the mix along the way was the 2004 EP Live in Sin(“Rough Round Edges” was a standout on this one), a limited edition cassette called Pop the Question (featuring a re-version of the acoustic early track “Sentimental Heart,” dressed up like The Cure’s “In Between Days”). Surely you notice the progression from here, and by 2005, the young romantics had released Get Married.

So what was it about The Snow Fairies that we loved so much? Friendship, no doubt, but also a sense of kinship and equality. The song you can listen to just up that-a-ways ^^^ might well be the band’s mission statement. “Life Of a Total Square” from Get Married nails the chiming, Camera Obsura-esque sentimentality and inviting jangle-pop melodies they did so well, and marries it (har har) to honest lyrics about not fitting in. Not in like the “I didn’t fit in, so I found punk rock, and suddenly the outcasts had a home” sense. There’s a certain degree of myth in that old chestnut, after all, and this song elucidates the probably more common scenario of just straight-up not fitting in, period. A self-consciously unfashionable band making music in one of the most fashionistic eras (The Strokes, Yeah Yeah Yeahs, Interpol, MGMT, etc.) of recent musical memory. “And I don’t know what to say, and I don’t know what to wear, it’s the life of a total square.”

The band’s final show was at Tritone on December 29th, 2006. They’d released the Voila EP earlier in the year, and it was their most shimmering collection of songs in a fertile discography of shimmering songs; the opening blend of guitars and voices on “Southern Belle” makes me feel all kinds of ways. There was no specific reason given for the split, no controversial in-fighting or shade thrown in the local alt-weekly press. I’ve never talked to the band specifically about it – probably because it’s not important. They were great while they were here, their music continues to be great, and their friendships endure. I took that photo at the final Snow Fairies show. I don’t know who the person in front is, but her smile pretty nicely encapsulates the vibe I remember their audiences having. Pure joy, pure freaking wistful earnest expressive joy. If there is a tenth of it in this weekend’s reunion shows, hearts will melt, tears will be shed, and most importantly, fun will be had.

The Snow Fairies play Space 1026 with My Favorite and Mercury Girls on Friday, May 20th; tickets and more information on the show can be found at Facebook. The band also performs at Baby’s All Right in Brooklyn on Saturday, May 21st, for Popfest NYC; tickets and more information on that show can be found here. Listen to most of The Snow Fairies’ discography here.