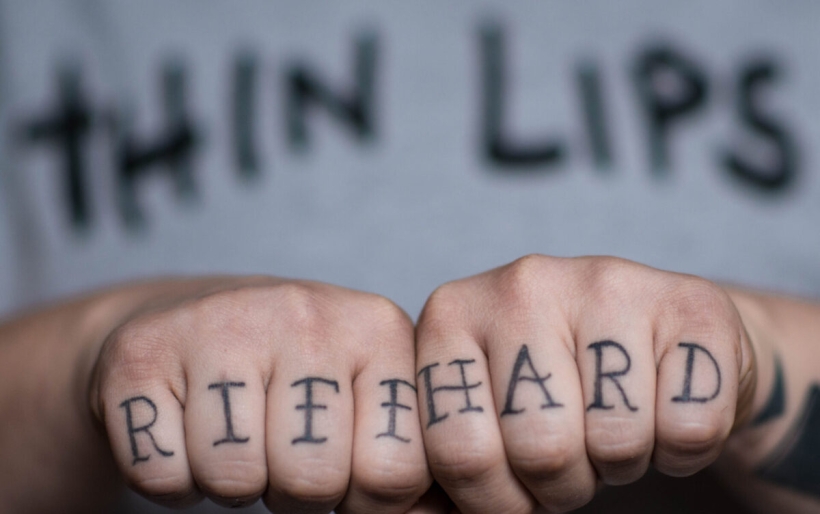 UNLOCKED: The Key’s review of Riff Hard by Thin Lips

“Smoking out my window,” she sings. “Learning to let go.” Eight words, eleven syllables, five seconds. Yet so perfect. The song is “I Wonder,” a sprinting rager with twinkling hammer-on guitar leads and a chrunching, crushing rhythm. It’s invigorating in sound, boasting serious flail-around-the-room / go-for-a-hard-run / bike-from-West-Philly-to-Fishtown-in-the-rain kind of energy. But more affecting is the lyrical content, where Tashjian opens herself up as vulnerably as possible.

What is she learning to go of? A friend, a lover, a companion. Or more to the point, a connection in her life that she desires but knows is not working. “I still want you / but I don’t want to,” she sings. She knows that the person on the other end deserves something she’s unable to provide. It’s the moment of that tragic realization that something you dearly want is not something you’re able to have.

With any kind of tragedy, as we discussed in our introduction to Thin Lips’ new record, there are two ways of responding. You can huddle down, go inward, wallow in self-pity – an approach that, with the above situation, might result in a song like “Something I Can Never Have.” Or you boldly challenge the setback and circumstance through joyous melodies, through top-of-your-lungs shoutalongs with your friends. You make fast and loud and upbeat noise with your instruments. You riff hard.

The latter is the approach on the band’s debut album, which is out Friday on Lame-O Records and which is streaming in its entirety at Spin. The energy is high and heavy, the mood feels light – but the motivation is aggressive expulsion of negative energy. It’s catharsis.

With roots and in and nods to 90s punk rock, the album clocks in 10 songs at just under a half hour. Opener “DEB” spans understated Cars-style verse chords and arching, Green Day-esque refrain riffs as Tashjian sings “I drank my humor and my beauty away.”

On “Never Again,” we get the first taste of the sharp interplay between her and lead guitarist Chris Diehm: guitar harmonics dance up and down the fretboard as chugging, old-school-Weezer rhythmic interplay between Tashjian and bassist Kyle Pulley holds the center. Again, Tashjian’s lyrics don’t flinch: “I don’t believe you’ve ever touched me / and to be honest I don’t think you’ve ever tried.”

Ditto on “My Mouth Is Skinned Like An Apple,” a bodacious ode to desperation in the vein of that dog.: “goddamn, we’re all afraid of the truth,” sings Tashjian, “so I don’t say a thing.” Her brother Mikey responds on the drumkit with a thundering lack of restraint.

If there is a shortfall in Riff Hard, its the number of songs that do exactly what the title instructs – they’re kicking, screaming, driving power pop anthems, one to the next to the next. The variation in tone isn’t exactly maximized.

There’s one notable exception to that: “What’s Wrong,” the album’s only true slow jam, done in simmering minor key. If the arrangements elsewhere on the album are in the spirit of Weezer, this song is Thin Lips’ “Say It Ain’t So,” a burning and explosive vignette full of captivating, aching imagery: “sleeping until 2 / you’re doing drugs” Tashjain says of a particularly toxic companion. Again, the story tracks the realization and the coping, but with the pace crawling and the tone roaring, most palpable is the desperation.

That’s all still there when the tempo is high, though – and even with the songs hitting in the fast lane, the compositional nuance keeps it interesting and vibrant. When I first met Pulley and the Tashjians in their old band Dangerous Ponies, Chrissy spoke lovingly of The Beatles, and how they were the one songwriting common ground among that band’s seven or eight members.

You can still hear that influence deep on Riff Hard: the chords may be of the power variety, yeah, but this isn’t some E-A-B-A Ramones shtick…you can tell that Thin Lips are seasoned players who understand composition and complimentary scales and more intricate ways of building out a song.

Take “Andy Weed,” one of the more complex chord progressions in the mix – it keeps you on your toes amid slam-dancing rises and head-banging break-downs and gives you a true sense of place and character: “You’re the only one I knew who falls apart / and I’m the sweet seventeen trailer park.”

It hurts. And it helps. That’s as true for the listener as it probably is for Thin Lips themselves.

Riff Hard is the featured album in this week’s edition of Unlocked. Listen to the song “No Obituary” in yesterday’s post and check back later this week for a video, an indepth interview and more.