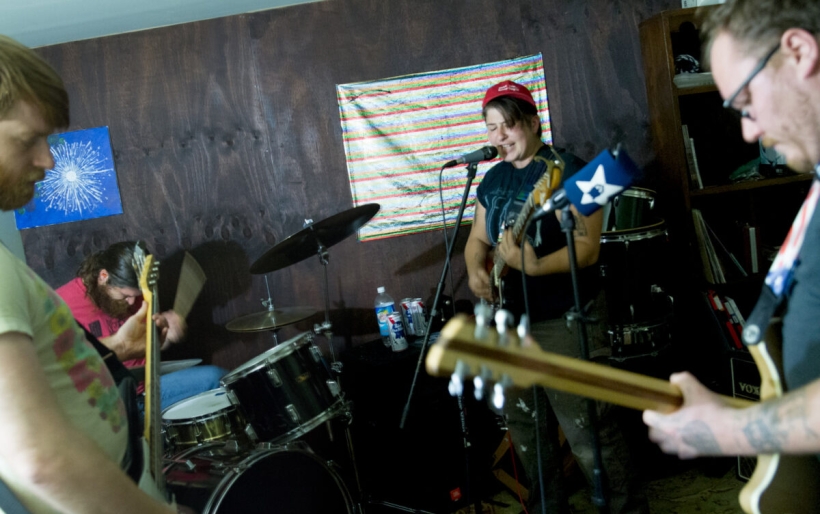 UNLOCKED: The inner workings of Thin Lips, or how its better not to keep secrets

It’s a soggy Monday night in Philadelphia and we’re crammed into a small room in Fishtown’s Big Mama’s House arts space. The room, which maybe measures 15-by-15 feet, is the practice space of Philly punk four piece Thin Lips, but it also doubles as drummer Mikey Tashjian’s living quarters. He moved in not long ago, and started lightly decorating the room with random artifacts – record sleeves, iridescent fabric, a blue-ish abstract print made by his aunt.

The band is workshopping many things at once on this particular evening – it’s about to head out on tour in support of Riff Hard, their debut LP out today on Lame-O Records (that we’ve been featuring all week long on Unlocked), and it’s been a while since they played these songs together live. Kinks are worked out, particularly on raging album opener “DEB.”

After a few passes through the two-minutes-and-change blast of energy, the band stops for a breather and we casually chat about the items Mikey has scattered the room. Above his bed, a polo work shirt on a hanger dangles from a hook on the wall. It belongs to the Tashjians’ late brother Billy, who passed away at age 22 in January of 2014, right before what was supposed to be Thin Lips’ live debut opening for Radiator Hospital and Potty Mouth at Boot and Saddle.

Mikey says the shirt is a reminder. “You can work hard,” he says. “You can be a good person. And you’re still going to die.” It gets momentarily heavy, but we riff through the song one more time before stepping into a studio space to unwind over some tallboys.

If there’s been a theme to our exploration of Thin Lips this week, it’s that loud and lively music is a vehicle for catharsis, for purging personal tragedy. Chrissy tells us that the band name is derived from the fact that she’s terrible at keeping secrets. And that she’s okay with that.

“I use this band as my therapy,” she says. “I don’t have time for therapy, I work construction and then I play music. I’m so busy trying to make records and go on tours that this is my outlet.”

Guitarist Chris Diehm concurs. “The only time in my life that I’ve actually gone to therapy,” he explains, “is the time when I wasn’t in a band.”

The Tashjians and bassist Kyle Pulley (who also produced Riff Hard at Headroom Studios) first played together in the sprawling indie-pop collective Dangerous Ponies. That crew broke up in 2013 and it was very much an amicable split; Chrissy is sporting a Superweaks t-shirt this evening, the rock and roll vehicle of her former bandmates Evan Bernard and Chris Baglivo, and Mikey drums for both bands. They’re all dear friends, but as Kyle puts it, his own musical outlook is very simpatico with Chrissy, whereas the Ponies were ultimately unraveled by a too-many-cooks scenario.

“[It] was tough artistically because it was always up to a committee,” Pulley explains. “And there were always compromises and people writing their own parts.”

In Thin Lips, there’s fewer musicians and more consensus; Diehm says it was evident even as a spectator.

“i was a fan of Dangerous Ponies and Thin Lips before i joined the band,” he explains. “Having it be totally stripped-down when Chrissy is the only guitar player, it’s like…yes. I think it’s a lot more clever and precise now.”

Chrissy explains that there was a reluctant element of post-band depression as the Ponies wound down. “I originally wanted to quit music,” she admits. “But then you go to a couple shows and think, ‘well, now I gotta play again.'”

“As Ponies was breaking up I remember saying to Chrissy, lets jam soon, but wait a couple months,” Kyle adds. “It was already an idea as we were breaking up, but we needed a break.”

Which in a way speaks to the themes of the band; a band breakup and the affect on friendships surrounding it is not unlikes a couple breaking up.

“Most of my songs are about human relationships,” says Tashjian. “But I’m also really into the birth and death of being that happens when you’re alive.

“I’m not really obsessed with being in love with one person or being married to one person.” she continues. “Having something being my everything or not talking to my ex. These heteronormative ideas [work] for some people – and thats great, but they’re not for me. I enjoy the parts of my life as they come and I learn things from that.”

In other words, embracing the transience of life. Loving your friends and family when they’re here; knowing they won’t be here forever. As we pointed out on Monday, the song “No Obituary” on Riff Hard was inspired by a conversation Tashjian had with her partner following Billy’s passing – and how that tragedy put other elements of her life into perspective. Little things that she saw as hugely contentious were actually relatively minor in the grander scheme of things. Realizing this helps you be more compassionate and empathetic, and appreciate the ones around you on the day to day. Diehm experienced this in his own way. He joined Thin Lips from the ranks of his old band 1994! and his still-active band Year of Glad. Tashjian and Pulley were looking to turn their studio / jamming project (which began with drummer Pat Brier, before he got busy with Three Man Cannon) into something more concrete – Mikey suggested bringing Diehm onboard. But right around that time, his father was diagnosed with a rare form of Croits Jakob Disease, a degenerative neurological disorder. He found out that his dad was terminally ill as he was about to leave for tour.

His father is a musician in his own right, which makes Diehm even more motivated to soldier forth with Thin Lips. He wants to do well by him, to make him proud. “Some of my earliest memories are falling asleep in his acoustic guitar case, that I now have, listening to him and his friends in the next room practicing and drinking beer,” Diehm says. “So he’s always been playing music, playing shows. He never got to tour and that was always an aspiration of his.”

He says he talked it over with his family and they were incredibly supportive; his father, he says, is bedridden now. Thin Lips played a benefit show in Lancaster for him earlier in the month. “It was a really beautiful experience,” Diehm says. “He made it to the show.”

At the benefit, Diehm says his father’s various musical partners from other the years performed – a folk duo, a rock band, a bar band – with friends and loved ones filling in for his parts. Diehm filled in with the acoustic trio before Thin Lips played. Chrissy says it was incredibly emotional, and she had to sneak out to the parking lot to cry. But as she describes this, there’s not a trace of shame or regret.

When Billy was hospitalized with blood clots, she says, she says it was wonderful how her family bonded – the waiting room was packed with people, food and drinks, they gathered together and comforted each other with their presence.

“The doctors had never seen anything like it,” she says. “It was a tailgate. People were laughing and being so kind. It was lovely. It was terrible, but…”

“…but it’s all you can do,” adds Mikey. He’s not a man of many words this evening, but they hit home each time.

Diehm has similar hopes for his family.

“They say when you lose a loved one, you become extra emotional,” he reflects. “I’ve been watching Zillow commercials and crying. I also watched the series finale of The Office and never cried so much at a TV program in my life.

“But when he does pass, we keep saying that we’ll wait a couple months, then go up to the woods and throw a fucking party,” Diehm continues. “Celebrate him and scatter his ashes in the morning.”

We collectively exhale, and return to songwriting. Chrissy says what it all comes down to is that she is wildly a people person. She experiences life through connections and interactions and the cherishes the things you can learn from them. And that’s why, with Thin Lips, it’s important for her to be as open about those things as possible. To not keep secrets.

Riff Hard is the featured album in this week’s edition of Unlocked; check out Monday’s spotlight on “No Obituary” here, read Wednesday’s album review and check out yesterday’s spotlight on the playful video for “I Wonder.” The band plays Everybody Hits tonight to celebrate the release of Riff Hard. More information on the show can be found here.