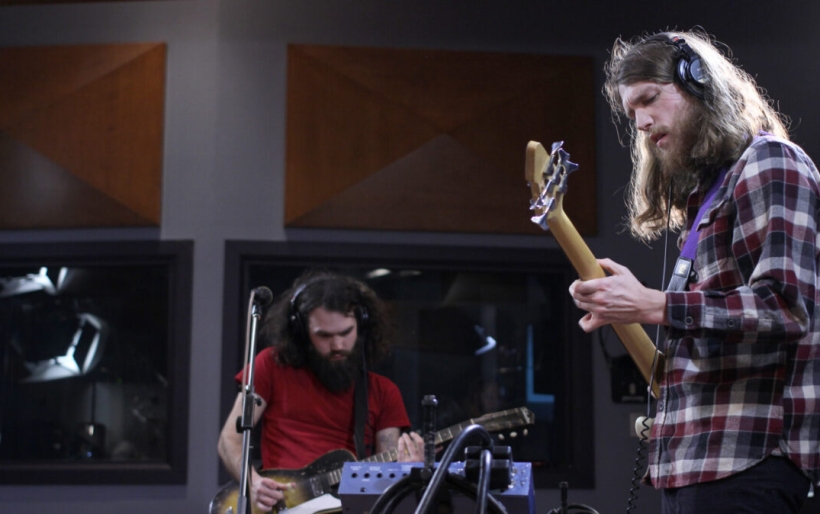 Bookspace was a great DIY venue on Frankford Ave circa five years ago, if for nothing else than the sheer novelty of seeing crushingly loud rock shows in a towering warehouse stacked floor to ceiling with books. There was something about that straddling of artistic disciplines, sounds and literature, and it seems appropriate that this was the first place I saw Meddlesome Meddlesome Meddlesome Bells, the subject of this week’s Key Studio Session. I caught the Philly five-piece on a bill with the late great An American Chinese and they immediately impressed with arcing, angular blues guitar riffs and a thunderous rhythm section centered by soaring, dynamic vocals of frontwoman Kerrin Pantelakis.

The band’s output in the years since that first encounter has been equally engrossing; a vibrant mix of Black Sabbath and PJ Harvey, with dalliances in folk, punk and psychedelia. Following its 2010 debut The Sirens, Too, Sang That Way, Some Bells continued with the Worried Land LP in 2012 and last year’s radiant pink self-titled album. It looks like they’re fixing to bring some more sounds and vibes into the world as well, at least based on some teasing they did on Facebook last month.

In the meantime, we’ve got this week’s Key Studio Session, and some footage of the band performing “Muzzle Loader” care of local videographer Michelle Goodwin and the Random Tea Sessions crew. The lineup of R.J. Gilligan on guitar and vocals; brothers Yuri and Caleb Gohen on guitar and bass; and Tony Dunst on drums are loud, tight and badass. In their set, we also hear the recent standalone single “When You Were Free,” released last summer, and a taste of things to come called “On the Way to Neptune.” Listen and watch below, and grab a free download here.

It sounds like a safe bet that the band will be bringing you some more new material in their live set this summer, so check them out when you can. This Saturday, June 4th, they play the Midnight Sun Festival, a psych-rock haven at John and Peter’s in New Hope; tickets and more information on that show can be found here. And on Friday, June 17th, they’re back down in Philly for a revved up and wild night at Kung Fu Necktie. Information on that show can be found at the XPN Concert Calendar.