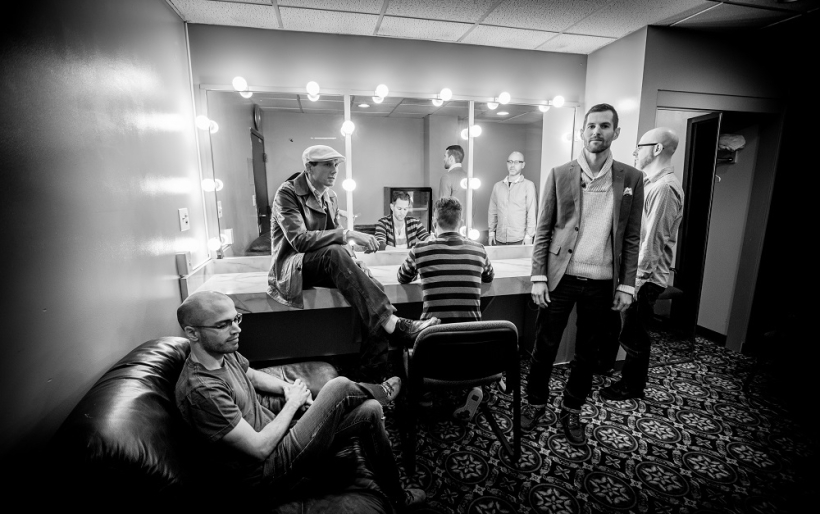 Lotus | photo by Tobin Voggesser | courtesy of the artist

Electronic songwriters / producers Lotus have long been known as vibescape pioneers, pushing the boundaries of instrumental compositions since their days in Indiana. Now based in Philly and Denver, the quintet is rewriting those boundaries with a new record called Eat the Light, out next week. “Move Too Fast” is the second single from the LP.

As the band tells us over email, this effort is Lotus’ first to feature vocalists on all tracks. Damn Right! bassist/singer Johnny Fissinger steps into that role on “Move Too Fast,” a collaboration borne out of joint show billings. From Lotus bassist Jesse Miller:

“I sent [Johnny] some of the initial recordings of ‘Move Too Fast,’ and he recorded the line “The pending situation sees me on my own.” I’m very particular about syllables and rhythmic phrasing, and I thought this line was great. It evokes a scene in very few words. The plosive ‘P’ of ‘pending’ land right after the first backbeat to create a strong rhythm. And the alliteration between ‘situation’ and ‘sees’ gives the whole phrase a slippery feel that matches the instrumental groove. Johnny and I worked together over a number of recording sessions to build up the rest of the vocal part based on the foundation of that line.”

The song is pop-oriented and funky, driven by syncopated synths and an infectious hook buoyed by Fissinger’s atmospheric vocals. Lotus point to LCD Soundsystem as an inspiration for the record, and the influence of James Murphy’s songwriting certainly comes through on “Move Too Fast.”

But it’s still all about Lotus. when they shared lead single “Eats the Light” back in January, Miller told Billboard that the songwriting focus for their eighth studio LP was to get to the heart of the groove that runs through the band’s live show. Recording sessions at Fishtown’s Miner Street studio helped hone in on that groove, as did further collaborations with local musicians like Mutlu and Steve Yutzy-Burkey.

Listen to “Move Too Fast” below, make plans to check out Eat the Light in full at a free listening party at Johnny Brenda’s on July 11th and stay tuned for a big show announcement coming soon.