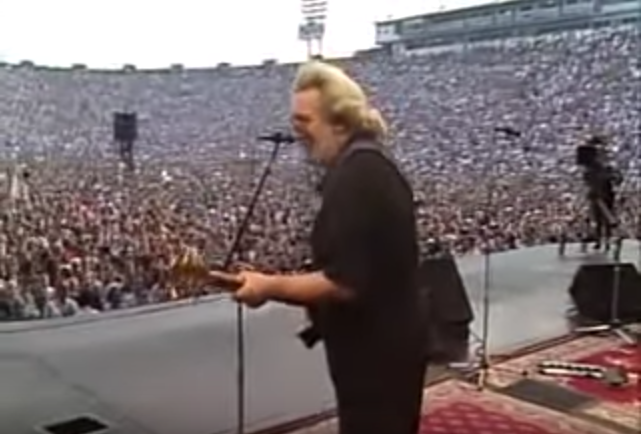 The Grateful Dead at JFK Stadium in 1989 | via YouTube

Suffice it to say, this place was massive, though by the end of the 80s had outlived its useful existence and was shuttered. Short of the Rolling Stones using it as a practice space for their Steel Wheels tour dress rehearsals – the most epic practice space of all time, wow – the field went dormant and was leveled in 1992 to pave the way for what is now the Wells Fargo Center.

The final show at JFK was a great one – The Grateful Dead performed a two-hour and 53-minute gig at JFK on July 7, 1989, 27 years ago today – but it was at the same time unceremonious. The fans in attendance did not know the stadium was shutting down. The band maybe had gotten wind (see below), since they closed the set with a cover of “Knockin’ On Heaven’s Door” by Bob Dylan, or maybe they were just paying tribute to one of the finest American songwriters of all time.

In any case, the concert was professionally filmed – making its way to release in 2010 for the Crimson White & Indigo DVD – and today, on its anniversary, we bring you some clips from the show. There’s a lively-as-ever “Iko Iko,” sentimental takes on “Let It Grow” and “Ramble on Rose,” and a clip of Jerry’s spaced-out licks on “Scarlet Begonias.” Watch ’em below.

Per Wikipedia, the show almost didn’t go on.

Six days after the Grateful Dead’s 1989 show, then-Mayor Wilson Goode condemned the stadium due to multiple findings by city inspectors that the structure was structurally unsafe and a potential fire hazard. Just hours before the concert, city inspectors discovered piles of combustible materials, numerous electrical problems, and crumbling concrete. There had been reports of falling concrete for some time before then. The Grateful Dead concert was allowed to go ahead due to strict no-smoking regulations that had been enacted some time before. Renovating and repairing the stadium was quickly ruled out, and it was demolished on September 23, 1992.

Along with videos, an exceptional audience recording of the entire concert also survives, thanks to an ardent fan in the taper’s section. You can listen to that bleow, and grab a free download of it at Archive.org.

Were you at this concert? What do you remember about it? Let us know in the comments.