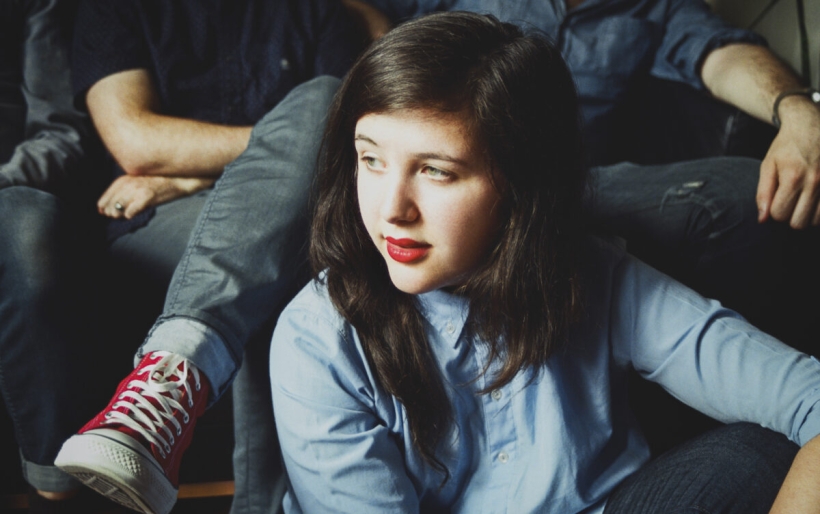 Lucy Dacus | photo by Dusdin Condren | courtesy of the artist

She may just have turned 21, but Lucy Dacus sings with the honesty of someone way beyond her years. Her debut album, No Burden, was just reissued by legendary indie Matador Records and was met with critical acclaim by everybody from TIME Magazine to NPR’s Bob Boilen. No Burden is a collection of lovelorn rock songs ornamented with Lucy’s drifting alto and honest, passionate lyrics, whether it be driving (“Strange Torpedo”) or heartbreaking (“Trust”).

Her band, made up of Oberlin music alum Jacob Blizard on guitar, Miles Huffman on drums, and Bobby King on drums, bring Lucy and her unorthodox guitar playing from a singer with a song to sing to full-on emotional catharsis. Lucy plays Johnny Brenda’s this Tuesday, July 19th, with Philly indie-rockers RFA. I spoke with Lucy on the phone about two weeks ago, where we discussed everything from her hometown of Richmond to her inspirations behind No Burden to what she has coming up in the future. The Key: So first off, could you tell me a little about the Richmond scene, coming up through there and how its had an impact on you?

Lucy Dacus: I think it’s a really unique place because it has such good music, but its not a major city so it lacks the competitive air of larger cities that are known for their music scene. The problem with Richmond is that there is not a lot of infrastructure, and there are not a lot of labels or booking agencies or management groups. It’s kind of a diamond in the rough situation. Luckily, I think people are starting to watch. People and bands are just starting to tour out of Richmond and repping outside the city. And a lot of the bands from there that I like, I can help them book out of town. Its a really supportive community with really incredible people.

TK: Have you played in Philadelphia before?

LD: Yeah, the first time we played was at a house and we actually played with the band RFA, who we will be playing with again at the show. I don’t really know what they’ve been doing since but it was one of their first shows when we played with them and they are really nice guys.

TK: What other Philly bands are you into?

LD: We played with Hop Along and Cayetana in Richmond when they came through. Incredible bands, incredible women, I listen to both Hop Along records and the Cayetana record all the time. What’s cool about them and what’s cool about Philly is they are also super proud of their city. We also played with Kurt Vile, another Matador dude, and he only has awesome things to say about Philly as well.

TK: Could you talk about some of your influences going into your record?

LD: The only direct influence I can remember was Shakey Graves, because I play in this alternate tuning (DADF#AD) that I found by just turning pegs and thought it sounded nice by ear. A couple days after I discovered this tuning, I figured out Shakey Graves uses the same tuning. I had never heard of it before and I watched all of his videos when he was still doing the one man band thing. And I’m pretty sure I’m influenced by Broken Social Scene because I listen to them all the time. And Yo La Tengo, bands that make a lot of music and have a lot of ideas, but specifically I know I’ve learned a lot from watching Shakey Graves play in that weird tuning.

TK: So you have another record you’re working on now?

LD: Well, as of a couple weeks ago I would feel comfortable saying that the lyrics and the melodies are done for the next record. It kind of came together unexpectedly and I realized these songs wrote individually, put in the right sequence, they feel like a complete idea. More unified than No Burden actually. Later today we are having our first demoing session and practice where we are going to start arranging and we are all really eager to get back in the studio.

TK: I saw you did a Tiny Desk Concert with Bob Boilen?

LD: That was the most intimidating thing I’ve ever done. It really is his desk, I don’t know if people realize that it’s not a set, he moves his rolley-chair and you set up in the space between his bookshelf and his desk. It IS tiny, and another thing is that it’s at the NPR office and some people are at work and some people are on their lunch break, it was the weirdest venue I’ve ever played. I kept thinking, “My face is probably red, I probably have pit stains right now, i’m sweating.” [laughs] I always assume the worst, but it was a lot of fun. Bob is an amazing person, we were talking about records that had came out this year and I don’t know how he keeps up with all it and how he doesn’t get sick with talking about music 24/7, but it is a really cool place and a really cool archive of current music and it was an honor to be considered a part of it.

TK: I’m excited to see it! Could you talk about your songwriting process?

LD: So usually what happens, I only write lyrics first. I will write lyrics and melody and be able to sing the entire thing before knowing any of the music and then I figure out on guitar what makes sense. Lyrics have always been the priority for me, and music is amazing on its own but for me personally, it’s such a powerful communication tool and that’s why I really do it, to have that platform for words.

TK: And making that connection with the audience, right?

TK: So after you play Philly, where is the tour taking you?

LD: We’re going up to Connecticut and then Rhode Island for an event that Bob Boilen is actually throwing for his book, Your Song Changed my Life, and he’s getting a bunch of people to play covers of songs that changed our lives. We haven’t decided what song we are going to do yet but we have a couple options i think. Were gonna make our way to Lollapalooza, which we are really stoked about. I’ve been to Lollapalooza twice and I could not have guessed that that could have happened five or four years ago, and I’m sure it will be really surreal. And then after that we are going to the west coast, which I have never done. We’ve never played that far out either, and then all the way around the country and then back home. Thats until late August and then we go over to Europe.

TK: And then you start working on the new record?

LD: Well, we have some dates with Car Seat Headrest in September and I’m excited to see them again, but when we have three days off, we’re working on it. We want to see our families and our friends, but theres not really an off day. We pretty much go to work every day in some capacity.

TK: You said the new record is going to be more concept driven?

LD: All these songs were written in a time period where I was thinking in the same train of thought, and I don’t really want to jump the gun because things could change by the time its release, but as of now there is a certain direction we are going to go in.

TK: And thats compared to No Burden, which was more individual songs put together.

LD: Yeah, I didn’t write those songs intending for them to become an album. I didn’t even write some of those songs with the intention of them being heard. I’m really lucky and it’s amazing that people have heard them, so that one was like, out of the songs you have, which ones do you want to record? The ones we felt connected to.

LD: Yeah! I did art school and film school and have been influenced by people over the years, but I’m honestly a little peeved at art infrastructure and how it’s really exclusive. There are still people that break out of that. I really like Miranda July, cross-boundary creative people. Another person, Agnes Varda, who’s around 80 still making installation art. She made an autobiographical movie about herself which I think is pretty much the bomb. That’s the dream. That’s a thing that influences me a lot, when artists talk about themselves honestly. To be critical of yourself and to really look at yourself is not only good for the individual, but to share it with others recognizes the value of one life being looked at so intently. I’ve learned a lot from how they view themselves and how I see myself because I see how they communicate their lives. It’s different than fiction. Fiction has a similar power, but I think autobiographical movies are the most honest and hard works to make.

TK: Would you say your music is autobiographical?

LD: Well all of it is definitely inspired by my experience. A lot of time when I’m writing I’m sorting out something, so I’m in the middle of deciding what I think, and sometimes I land on it. I feel like writing really makes me understand something, and when I’m writing and I still don’t understand, that’s fine. I believe in everything I’ve said through music, but I guess there are a lot of blanks. I would say it is autobiographical, but the story is not done at all. [laughs]

Lucy Dacus plays at Johnny Brenda’s on Tuesday July 19th with RFA. For tickets and more information, check out the XPN Concent Calendar.