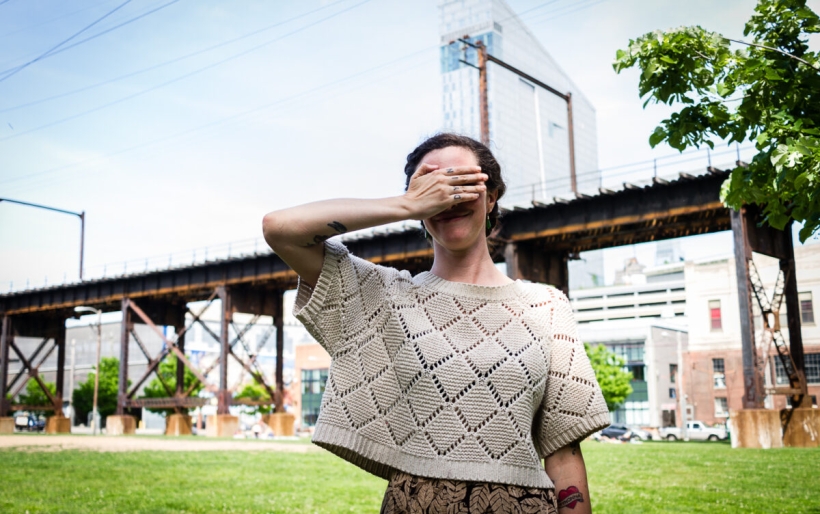 On a sunny Friday afternoon in May, we found Esme Patterson and her band reclined under the towering railroad trestle that cuts across the 31st Street side of WXPN. They’d driven up from a gig the previous night in D.C., were scheduled to play NonCOMM in a few short hours, and decided to take advantage of the agreeable weather to get some R&R on a blanket of green grass under the expanse of rust-orange steel, a curious intersection of post-industrial urbanism and the more verdant natural world.

Patterson’s music functions in a similar way. We Were Wild, released earlier this year, is a stylish set of raw, revved-up jams echoing the kinky glam era of the late 60s and the unbridled nightclubs of the Lower East Side a decade later. But Patterson is a skilled craftsperson of hooks, of catchy pop jams. Sometimes she veers unapologetically pop, coming off more Natalie Prass than Patti Smith…and that’s not a bad thing in the slightest.

Moreso, it’s a testament to the strong bones in Patterson’s writing – so strong that she and guitarist Philippe Bronchtein were able to perform solo electric in that pasture-esque field by the railroad next to XPN (okay, it doubles as a space for pick up soccer games half the time, but hear me out) and embody another identity still, this one vaguely folky and intimate, the notes resonating in the open air, her voice carrying with stunning acuity, grabbing the ears and attention of passers-by clocking out of their afternoon shift from UPenn’s facilities department.

Patterson first impressed us opening for Shakey Graves at World Cafe Live a couple years back – the set she and her band played that evening this May at NonCOMM was stellar. She will no doubt rock our faces off at the XPoNential Music Festival on Saturday. But there’s something arresting about that performance in a field, under the sun, near the shadow of a railroad trestle, that makes us confident that when the noise dies down, she’ll still be here. This is The Key Presents: Esme Patterson.

Esme Patterson performs on the Marina Stage of the XPoNential Music Festival on Friday, July 23rd, at 1:05 p.m. Tickets and more information are available at XPNFest.org.