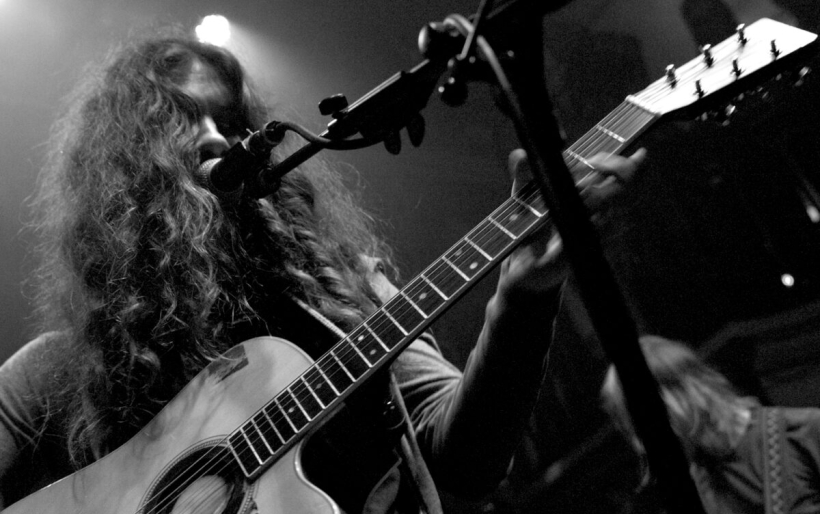 It’s not news that Kurt Vile used to drive a forklift for a living; a lot of his work is influenced by a blue-collar attitude — from folky fingerpicking to his gravely voice and lyrics. In this city, to gain any respect, you better have worked a dead-end job shoveling shit, fixing radiators, or some day in, day out task that propels you to dream of something better — and deserve it when you get it.

Kurt spent two years handling a mini tractor, rising its giant prongs up and down, over and over, 9 to 5, between lunch and dinner. He lived in Boston at the time. Then, he quit and moved home.

Which is how “Space Forklift” came about.

“I was so spooked by the fact that I was working this really bad warehouse job, and I didn’t make it in music yet, so I was freaked out,” he tells us. Soon after he moved back to Philly, he enrolled in a community college for one semester, but spent most of his time in the courtyard writing songs, trying to quiet that same anxiety.

The “foreign girls colonizing college benches” he sings of in “Space Forklift” were the other students on those courtyard benches. Their “Russian burly boyfriends” were there, too.

“I think my prose was being exercised, [and] the fact that I was writing papers [meant] the lyrics were coming out quicker,” he says. “There’s a lot of imagery in there, and it was nostalgic to that moment. That bench in the courtyard. But there’s all kinds of psychedelic images or stream of consciousness images, so I can’t say that it’s one story start to finish its kind of open.”

In our Time Capsule series, we talk to artists about a song they wrote and recorded that has since fallen out of circulation. We talk about what was going on while they were writing it, the process of recording it, and whether or not they’d change anything now that time has passed. Ahead of Friday’s XPoNential Music Festival performance, we spoke with Kurt Vile about one of the more Ziggy Stardust-fueled folk songs off of 2009’s Childish Prodigy.

The Key: You wrote “Space Forklift” when you were 23 years old. What other songs were you working on at that time?

Kurt Vile: Constant Hitmaker came out years later, but basically [at the time] I was making my first CDR under my own name. I was listening to a lot of John Fahey, Bob Dylan, folk stuff. I came back from Boston and all of the sudden I could fingerpick and I was working on home recordings. I was writing songs like “Song for John D” and “My Sympathy” which were also on God Is Saying This to You later on. They’re all on this CDR from 2003. I just kind of came into my own around then.

TK: In college, you mentioned that your English class was the only course you were even remotely interested in because it helped with your songwriting. What was the rest of that experience like for you?

KV: I think I’m just only interested in what I’m interested in. I remember I took a computer class and all I was doing was getting on my email booking shows and not paying attention. That [English] class for me was just cool enough. I had a history class and it was a joke. I remember I was like, “Oh I’ve got to write this paper…” and then it dawned on me [that] I’m not cut out to do anything but what exactly I want to do. Luckily, I’m obsessive. It’s not a “rocker” thing, I just wanted to play music.

TK: Do you remember when you first played “Space Forklift” live?

KV: Okay, jump to when I played it live — I played it with a band, The Violators, and it was like a total Rock and Roll version by then. I would jam it out. I played lead guitar at the end with like, fuzzed out lead guitar on the acoustic guitar. I had the rhythm from Mike Zhang — who was my first main Violator drummer. Also Adam [Granduciel, of War on Drugs] was in the band.

Basically, time has evolved a lot and I have a different band now. I have a feeling that I won’t be pulling it out anytime soon, but you know, just from like saying that, I probably will whip it out again. Maybe it will sound like the original version, who knows.

TK: Do you think it would fit in well alongside the material on your latest albums?

KV: I think it would. I’d say if anything, the two John Agnello records, Smoke Ring for My Halo and Wakin’ On A Pretty Daze, I’d say they’re a more produced affair. B’lieve I’m Goin Down is pretty produced too, but it’s also back to home spun organic. It’s not a far cry from the candidness and the vulnerability in the bedroom recording, which is kind of the world that I come from — bedroom folk music with a little psychedelic in there.

I think all of my songs could really be played whenever they want, but if two records were supposed to stand out from anything, would be the John one’s verses my self-produced ones, with maybe the exception of “Pretty Pimpin’.” It’s pretty polished in a way but it’s still pretty striped down, like basic fingerpicking and stuff. I feel like other than “Pretty Pimpin’,” everything feels pretty vulnerable and candid and not a far cry from bedroom folk recordings I’ve been doing, just up to date. A little better on guitar, whatever, stuff like that.

TK: If you were to re-record it or play it live today, would you switch anything up?

KV: A song is never going to be exactly the same, but it would be cool to revisit it and just play it straight solo. I don’t think… no, maybe I would re-record it, I don’t know. I was actually thinking about that other day. I used to be precious about that kind of thing, but I like the whole country music tradition. The more we talk about it, the more it seems like I almost have to perform it at some point soon now.

TK: What do you mean “country music tradition?”

KV: [Artists] will redo their songs or everybody does covers so it’s all about the song itself. Think about how things have changed now, where people will put a lot of things into their recordings and they become a unique experience and often times people don’t even want to hear the song again. I think in the country music sense if you just strip the song and if it’s a songwriter’s song, it touches people on an emotional level… just because of the song itself, not because of the effects of the song or like a guitar part.

TK: You’ve obviously covered a lot of ground since this song was released in 2009, even more since you were attending community college in Philly. Is performing at XPoNential Music Festival kind of like a homecoming for you? What are you most excited about?

KV: I remember I saw Lollapalooza there when I was a kid [in 1995] at the Camden Waterfront. Sonic Youth and Beck and Pavement and Jesus Lizard and Cypress Hill all those people [were performing], and they’re very nostalgic. That’s a prime influential era for me. So to actually play on that stage is cool. And at one point, I was probably like, at some point will my local XPN radio station actually play my music one day? You know, I started to kind of doubt it, like, how do you get into that world… but now actually professionally doing music for this long [laughs], you know, I’ve been around long enough to be invited to something like that, and bring my family to it, etcetera. I’m excited for all those reasons.

Kurt Vile plays the XPoNential Music Festival on Friday, July 22nd at 9 p.m. on the BB&T Stage; tickets and more information can be found here.