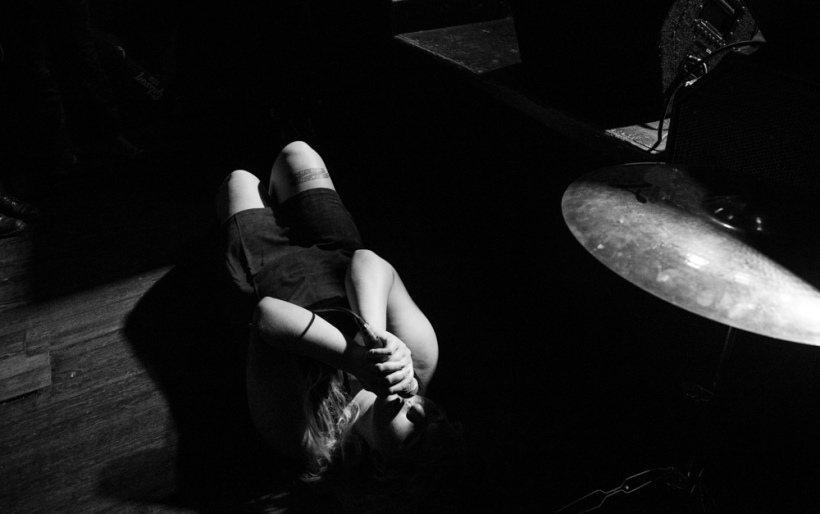 XPNFest Preview: Kississippi on the art of the sad song

Trying to unlock the secret of a sad song is harder than it looks. Zoë Allaire Reynolds still hasn’t figured it out – and she writes them.

“Being sad, I guess,” the Kississippi frontwoman offers as a possibility with a chuckle. Reynolds has just gotten her hair done. She’s thinks she might want to do something drastic to it in the future, but for now just a trim. For someone who so adequately spells out moments of distress, she’s bright and chipper.

Her band’s latest EP We Have No Future, We’re All Doomed is full of murmuring heart ache. Released last November, the six song collection was written during a time of transition: Reynolds unsure if she wanted to continue her education in graphic design. So she wrote songs instead. Glittering and somber guitar lines lift Reynolds’ sweetly despondent vocals throughout. “I’m not sure where I fucked up / I’m not sure if I don’t talk enough / Should have known that you don’t like to be touched / Should have known that you don’t like to be touched” she sings over light coos on closer “Greyhound.” Reminiscent of the Bay Area’s Big Tree and Athens, Ga.’s Mothers, Kississippi has the ability to wound your soul without getting bogged down by sadness.

Since the EP’s release, Reynolds has been writing songs for an upcoming record, which she hopes to record this fall, but she’ll take a break to perform at this weekend’s XPoNential Music Festival. Equipped with a new lineup, Kississippi will play the JerseyArts.com Marina Stage at Wiggins Park at noon on Saturday, July 23.

A longtime player in the Philadelphia music scene, Reynolds was a member of a 12-piece indie folk band during high school in Montgomery County. Feeling lost in the mix of a large group dynamic, she struck out on her own and formed Kississippi as a solo project. She’d write late at night when she couldn’t sleep, throwing lyrics on a page – like “Sometimes I get so nauseous when I’m looking at your face / Not ’cause I’m sick, but ’cause it fits perfectly in it’s frame.” on “This Song Used To Be About You” – and they’d stick.

“A lot of the songs that I write, I’ll just spew some stuff and be like, ‘Ok that sounds kind of good’ and then a week later I’m like, ‘Oh ok, maybe I wrote this because I was feeling this way about this thing,’” Reynolds said. “We’re months past releasing that EP and now when we play the songs, I feel totally different about them. They do mean different things than they originally did to me, but I also can process the feelings that I was experiencing when I wrote the songs more now because I’m not stuck in that moment. I’m discovering the meanings of the songs that I write later on a lot of times.”

But when it comes to the audience, or even the members in her own band, Reynolds stays mum on discussing inspiration for her songs – partly because she hasn’t fully digested them and partially because music is her personal form of expressing difficult topics she can’t otherwise verbalize.

“A lot of the subjects that I talk about on the songs are really really personal and really hard to talk about, which is why I write songs about them instead of having conversations about it,” she said. “I’m not always the best at communicating with people about the things that are going on in my life.”

That part is translating well. Reynolds recalls fans who approach her after shows, recounting times they’d listen to Kississippi to help them get through a tough time.

“I know that people are taking their experiences and using our songs as a way to cope with these feelings. There’s no way that they’re definitely experiencing the same thing I was experiencing when I was writing those songs, even though we have some similarities in mopeyness I guess,” she said with a laugh.

Kississippi performs at XPNFest Saturday, July 23rd at noon on the Marina Stage; tickets and more information can be found here.