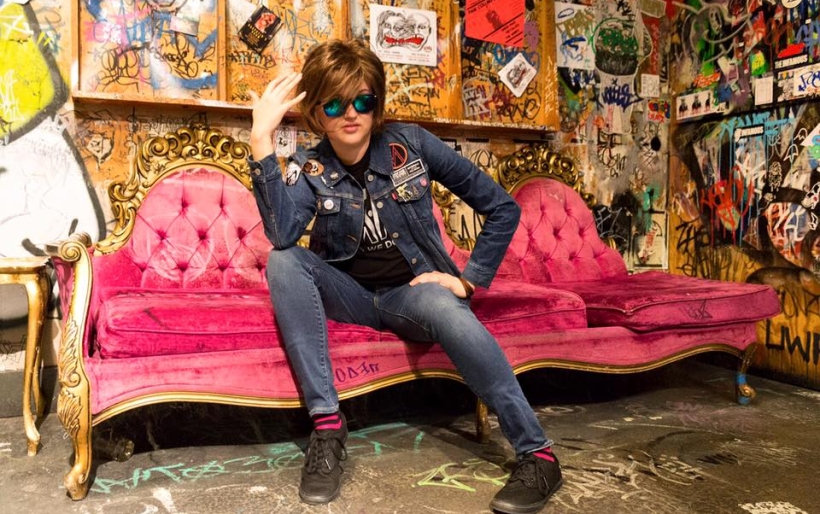 Sonia as Ryan | Photo by Laura Stock | courtesy of the artist

Sonia Petruse remembers exactly where she was the first time she listened to Ryan Adams. Like really, really listened to him.

She was familiar with the album 2001 Gold, of course, and its ubiquitous hit “New York, New York.” She remembered the song being paraded around patriotically in the months after 9-11, and hearing stories about how the songwriter wasn’t keen about its point being misconstrued.

But it was 2004 when the music really kicked in. She was 18, driving around her hometown of Leighton, Pennsylvania with a motley group of teenagers. They were in a small car, an old two-door BMW, and it was crammed to the gills. She sat on a friend’s lap. People were stoned. And “Dear Chicago” from the Demolition album came on the car stereo.

“Everything just stopped,” Petruse recalls. “It was so noisy, but all I could hear was the song. And the lyrics, the guitar, his voice, his emotion.”

She asked the driver who it was; he stammered that it was this guy Ryan Adams. Petruse went to Soundcheck Records in Carbon Plaza Mall the next day and picked up a copy of the album, and it all snowballed from there.

“I became very enamored with his lyrics, with his process as an artist,” she says. “And then over the years learning that he’s also a writer, a poet, a painter.”

Today, Petruse is an interdisciplinary artist living in Philly, and her big project at the moment is an ever-evolving performance where she honors Ryan Adams in drag. It’s a nod to him as a musician, but also as a style icon, a writer, a thinker and a creative mind. She also feels a kinship with things he describes in song and things she’s experienced in life. Sonia as Ryan | Photo by Laura Storck | courtesy of the artist

Raised in Lehighton, a small town off of the Northeast Extension in the periphery of the NEPA rust belt, Petruse describes her formative surroundings in a tone that is equal parts beautiful and sad. She speaks lovingly of the natural beauty of the Poconos, and wistfully describes learning how to play music on a piano in her parents’ home. Her childhood was immersed in creativity, from tap lessons to youth theater groups (where she one played a flying monkey in The Wizard of Oz).

But Lehighton was also a place beset by poverty and drugs, and the general isolation of small town America.

“We had the diner, we had the lake, we had the interstate,” says Petruse. “We had all the bars. There’s line in ‘Dear Chicago,’ ‘I was thinking some of suicide / but there’s bars out here for miles.’ There’s a lot of parallel connections to my town and what Ryan sings about, whether he’s singing about Jacksonville, or Raleigh, or somewhere else in his home state. Which he says recently he won’t return to. And I can’t return to Lehighton, it’s too painful. That’s why I commiserate so much with his music.”

In her performances, Petruse borrows specific quotes from Adams lyrics and applies them to her own life. A quote from Love Is Hell’s “Does Anybody Want to Take Me Home” is recast to read “staring at my shoes in a cigarette shop in Tamaqua.” A quote from 29’s “Starlight Diner” now goes “it’s midnight at the Bowmansville Diner. Where are you? It’s getting late.”

Beyond these vignettes – lyrical snapshots if you will – Petruse relates to one of the major themes in Adams’ work: you can’t go home again. The sad realization that the past is past, and all we have are memories that become exponentially more distant as we age.

Petruse points to an Adams interview (she reads a lot of them for source material) where he admitted that “Oh My Sweet Carolina,” a song beloved for its warm sentiment and embraced in much the same way as “New York, New York,” is actually quite a bittersweet number. An acknowledgement that one day, our hometowns will be unrecognizable.

“He’s putting all these things he’s putting into words that I’m too scared to say or too sad to articulate,” she says.

After getting out of Lehighton, Petruse moved to Philadelphia and enrolled in art school. She doesn’t say where, and suffice it to say, it was not a positive experience.

“I abandoned everything I had been doing creatively,” she says. “Which, you’d think it would be the opposite. But art school didn’t cultivate anything. I tried to do performance, and they said no – I was threatened with being failed. It was not a supportive environment.”

After graduating, she moved to Los Angeles for a couple years, worked and socialized. During her time there, “Goodnight Hollywood Boulevard” became the poignant Adams song in her life, since she lived and worked on the iconic street. One night Petruse went to a party dressed as her favorite musician. She went to a store Hollywood Boulevard and got a wig for the role, cutting it to make it perfectly coiffed. She wore a Cardinal Rose belt buckle she bought on the Easy Tiger tour and a Batman t-shirt. She linked arms with a friend dressed as Linda Ronstadt, telling her “don’t worry, I’ll take care of you tonight.”

Petruse returned to Philly in 2009 and beginning to work promoting the local creative scene through Paperclips 215, a nonprofit network where she did digital marketing and social media. She dabbled in some projects, like her Braille Street Art collaboration with Austin Seraphin that won a Philly Geek Award in 2013. But for the most part, she wasn’t able to pursue her own artwork because she was busy spreading the word about the art of others.

That changed in 2015, when she debuted Sonia as Ryan, Ryan as Drag at InLiquid Gallery. It was her first public performance of what had become a bit among friends, all stemming from that Halloween party in LA.

She studied his looks and his moves; the way he smoked cigarettes, back when he was a smoker. The way he posed for photographs. She loves his use of gesture; “It’s very Egon Schiele. Hands up.” Think Bowie’s Heroes and Prince’s Parade. “I find it very beautiful and painterly.” 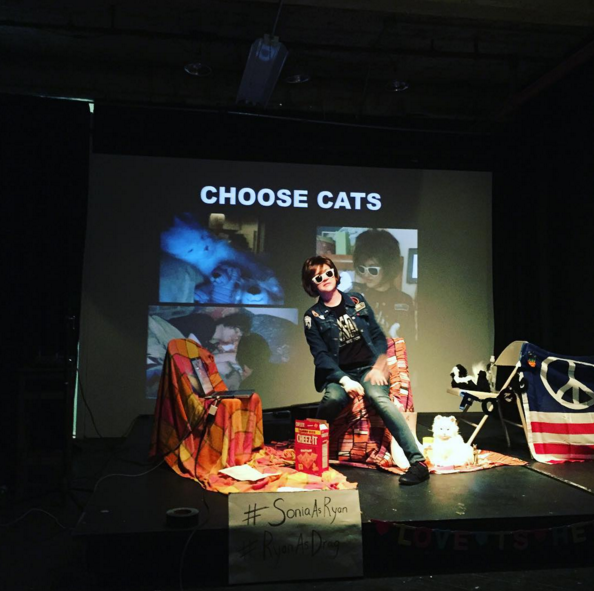 Sonia as Ryan | Photo by Hila Ratzabi | courtesy of the artist

She incorporated a wrist brace, a nod to a time he posted pictures of himself in a sling after a skateboarding accident. She sets up toy cats onstage, and the PaxAm peace sign American flag. And she studies his banter, from live shows she’s attended and videos she’s watched on YouTube.

“I see what Ryan does as full scale performance art,” she says. “He’s also a comedian – his banter is just genius, its great. Come for the rock show, stay for the banter. It’s important for me to incorporate as many elements as I can into it, taking things from drag shows, taking influence from performance art, taking it from Ryan himself musically.”

One of her biggest sources of inspiration is Foggy, the Tumblr blog Adams ran in the aughties that fans swarmed to. He posted YouTube videos, poems, lyric fragments, handwritten notes and all manner of ephemera before purging the entire thing in 2008.

“It’s this important literary work and piece of history of Ryan that he deleted,” she says. “The actual blog is gone, you can’t go there, you have to find in bits and pieces on fan sites, people who ripped the videos and reposted them. It’s like you’re this archeologist who has to put it back together, and that’s what I try to do in my show.”

In Sonia as Ryan, mixed in with music and banter, Petruse references the pieces of Foggy that she most identifies with.

“I do incorporate some of my own script – things I said about society, social media, loneliness – things I think Ryan would want to talk about,” she says. “But I find a lot of people just love the Foggy stuff. People will ask me, ‘who wrote that?’ ‘Well, it’s Ryan!’”

With source material veering on the obscure, it seems like the show might be an inside baseball thing for Adams megafans. But that’s not necessarily the case. It works on a variety of levels. You can watch it knowing the Foggy nods and recognizing every single lyrical snippet, sure. Or you could look at it and say “denim jacket, sunglasses, PaxAm flag, cats – okay, this is Ryan Adams,” and run with it, curious to learn more about all these references flying by.

“Oddly, I find people who don’t know anything about Ryan loving it even more, which is a great sign,” Petruse says. “I thought, oh my God, this such a niche thing only going to appeal to Ryan Adams fans, but I’m finding it to be quite the opposite.”

After the debut last fall, the Sonia as Ryan show has made its way to in various other venues – VoxPopuli’s Weryd Wimmen night in February, Creatures of Drag at Tattooed Mom’s, and the SUPER|object Hidden Histories group performance this June in The Louis Bluver Theater at the Drake.

“That [theme] really stood out to me,” Petruse says of the latter. “Everything I talk about with Ryan is a hidden history, even fans might not know what I’m talking about because I’m getting it from Foggy.”

She opened for Settled Arrows at Tin Angel earlier this month, and will be reading Adams’ poetry at Headhouse Books in August for Anne-Adele Wight’s monthly Jubilant Thicket poetry series. Sonia as Ryan | Photo by Laura Storck | courtesy of the artist

Petruse says it took her a while to get to this point – where she had the confidence to pursue a project at this level, work with promoters to get gigs and have a supportive network of friends who had her back. She’s quick to cite Philly photographer Laura Storck as her documentarian, and a big contributor to the look of Sonia as Ryan, and says they’re working on a video together for Digital Fringe this fall.

“In the past, some people thought me being in drag was weird,” she says. “I’m really lucky right now to have a boyfriend who thinks it’s awesome. He helps me promote the shows, he’ll be at a record store and just go up to people. ‘Hey, you like Ryan Adams? My girlfriend dresses up as him!’” He also backs her up on guitar at some performances (she’ll say, with her Adams-ian swagger, “This is my man Ian from Baltimore, he’s gonna be helping me out tonight.”)

Petruse would love to take the project to even more immersive levels – maybe popping up in Rittenhouse Square as Ryan Adams, performing a song or working on a painting. Or both.

Most importantly, she wants to stress that her act isn’t lampooning Adams – rather, she’s honoring somebody she feels is a brilliant creative mind, and one who she feels is frustratingly mocked or dismissed or objectified. She makes this a point in her show, opening each one with a Foggy quote: “I am Ryan Adams, and I am a human being.”

“People need to remember that,” she says. “And that goes for all celebrities or figures who are in the public eye. We’re all human beings, we’re all flesh and blood.”

She remembers one particularly striking image from Foggy: a webcam shot of Adams holding up a sign that read “You are very demanding.” Fans, of course, took it as being about them. But Petruse sees it as a broader comment, one about the digital age and how stressful it can be to swim in the ever rushing tide while also wanting some sort of safe harbor, some private space free of ridicule and full of compassion.

Sonia as Ryan, Ryan as Drag will appears next at Headhouse Books, 619 S. 2nd Street, on August 14th. Petruse is positively stoked to see Adams in concert tomorrow night at the XPoNential Music Festival, and you should be too. Tickets are still available here.