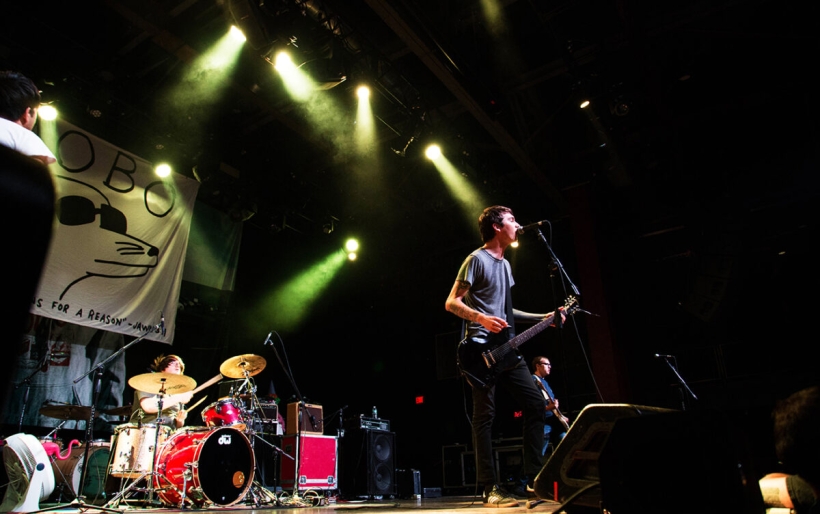 California punks Joyce Manor have the art of the two-minute-or-less song down to a science. Always packing in a friendly dose of angst, a heaping of heart and a dash of wonderment, the band squeezes into a short song what some band’s can’t with double the time. With their well-oiled machine ready to roll out again, Joyce Manor has just announced a long-awaited follow-up to 2014’s Never Hungover Again. The album Cody is due out on October 7th via Epitaph, and Joyce Manor just released the first single, “Fake I.D.”

The new track follows the band’s more melodic, narrative style that’s heard in the likes of “Heated Swimming Pool” and “End of the Summer,” rather than the thrashing and seething found on older songs like “Constant Nothing” and “5 Beer Plan.” With lighthearted hooks under vocalist Barry Johnson’s matter-of-fact storytelling of window shopping and his opinion of Kanye West (no Twitter beef here — he sings, “I think that he’s great, I think he’s the best”), the track harnesses what we’ve come to love and find comfort in with the band’s musical style while still showing an important and unavoidable growth.

Instead of the light-speed recording process of Never Hungover Again (done in a mere 10 days), Cody found the band in the studio for two months alongside producer Rob Schnapf, who’s worked with Rancid, Saves the Day and Elliot Smith. It’ll certainly be interesting to see if the new LP reflects the band’s extra studio time TLC.

Seemingly always on the road, Joyce Manor have been sure to hit Philly at least once a year for the past several years now, most recently opening for Modern Baseball on their Holy Ghost tour at the Fillmore in June. Lucky for us, they’ll be headlining two shows at First Unitarian Church on October 21st and 22nd with The Hotelier and Crying supporting them. Tickets and more information for both night’s shows can be found over on the XPN Concert Calendar. Give “Fake I.D.” a listen right here on Pitchfork.