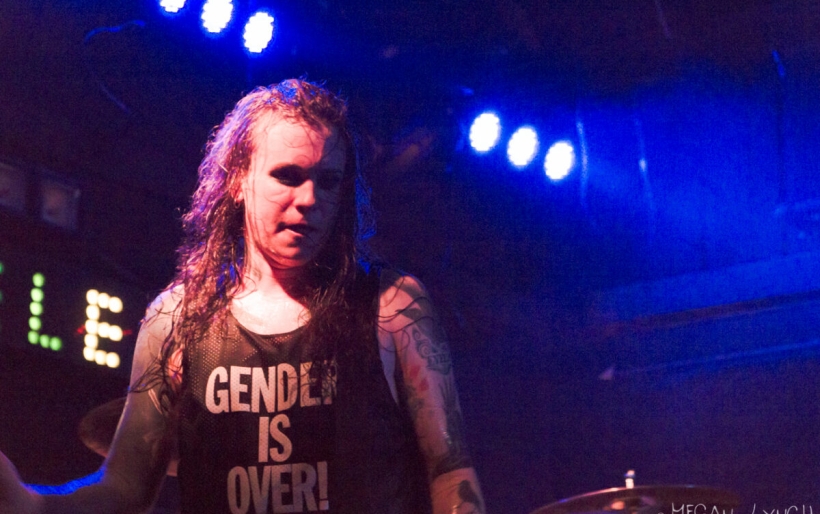 Against Me! | Photo by Megan Lynch | meganlynchart.tumblr.com

Against Me! release new singles off forthcoming LP, play The Fillmore in October

With the band’s seventh studio album Shape Shift With Me due out September 16th via the band’s own label Total Trebel, Against Me! teamed up with Adult Swim to premiere the song as part of the program’s Singles Series.

The new song is a fast and loud jolt to your system and plays like a bar fight; a swift punch of one liners like “I feel you like a phantom limb,” are met with the blurring madness of a collision of rock and roll sounds.

A month ago, the band released the lead single off Shape Shift With Me, entitled “333.” Both of these new tracks feature a signature style that was ever-present on the band’s earlier work, while blending in the experiences and issues of current day. In a press release referred to by Rolling Stone, vocalist and guitarist Laura Jane Grace said of the album:

“Is there a record that is about relationships from a trans perspective?”

“I wanted to move on to write commentary on living from a trans perspective…There’s been infinite amount of records talking about what love means from a cisgender perspective. I want to present the trans perspective on sex, love and heartbreak.”

Against Me! is set to play The Fillmore on October 5th, opening for SoCal hardcore vets Bad Religion on the their Vox Populi Tour, which also includes Dave Hause. You can head over to the XPN Concert Calendar for tickets and more information on the show. Listen to “Haunting, Haunted, Haunts” and “333” below.