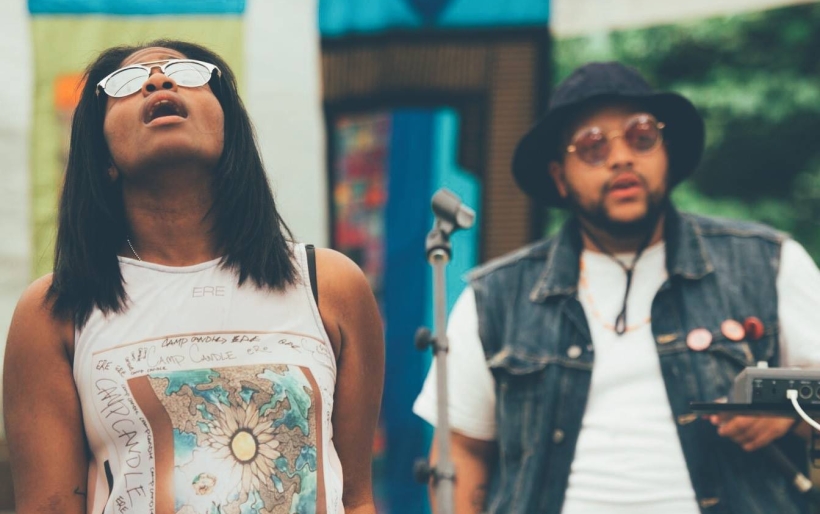 “And I feel it….I’m still shaking…..The weapons are drawn against me…I can’t take it.”

Dynamically shifting between loud and quiet sections, the brief, two-minute piece alternately flirts with light and darkness, capturing tense and fearful but resolute spirit of the day. Singer / guitarist Hetepsa describes the song as the hymn of a heart and mind heavy with disappointing revelations about our world. “’Weapons’ represents an awakening to the lies we are surrounded by and fed. The song sounds so happy because although the truth can be hard, it’s still beautiful to be in the know,” Hetespa says.

Producer / multi­-instrumentalist Nu Ra rounds out the duo, laying down a number of colorful beats and arrangements that bridge the gulf between accessible contemporary electronica and layers of ethereal dream­pop.

Hetepsa and Nu Ra initially met in high school and later reconnected while doing session work, writing and producing for local artists. Hetepsa explains “We had worked together with another artist, coming up with song ideas, we fooled around with ideas of our own, but didn’t get serious about it for a while.”

The musical chemistry was undeniable and the two formed Camp Candle in 2014. NuRa: “It wasn’t until we really questioned why weren’t we making music together. All the music I’ve made with other people didn’t really fit with my life. It’s surreal how things fall in place, like this was already mapped out.” Hetepsa shares that sentiment, stating that the duo “just clicks so naturally.”

ERE is full of well-executed ideas, tempering the band’s abstract electronic production with a knack for strong, poppy songwriting. Songs like “The Way” recalls the dancepunk that labels like DFA Records specialized in throughout the 2000’s, while “Wake Up” and “Until The Morning” wouldn’t be out of place on a Sia or Rihanna album, or the latest Soulection mix.

“Black Friday” released as a single earlier this year, marries sharp new wave guitar lines reminiscent of Twin Shadow with the sensuous, drum heavy trip-hop of bands like The Sneaker Pimps or Esthero. Nu Ra explains how the band fuses hip-hop based sampling and sound design techniques with a more “traditional” songwriting style. Throughout ERE, inventive samples are interwoven seamlessly with live bass and guitars.

“The process for ERE took more than a year to complete. We initially didn’t know what direction to take the project in but once we completed ‘Weapons’ we helped to lay a foundation,” explains Nu Ra. “‘Weapons’ and ‘The Birthday Circle’ were created using a plugin called The Mouth in [modular software synth] Reaktor. I like fell in love with that thing because I could literally hum ideas and it would create harmonies I’ve never heard. I come from a hip-hop based background and I really enjoy sampling.”

Camp Candle’s sound is the result of an open, collaborative process of writing and production. Both members share the load of coming up with ideas and composing songs; Hetepsa describes the process as “co-­everything.”

“Our process tends to be very intuitive and related to what either of us is going through,” says Hetepsa. “I guess the feeling would be just what we’re living or seeing other people live. ERE has pieces of the realities we see or experience or even wish to create.”

The duo’s confidence as songwriters and composers shines so brightly through ERE’s eclectic yet accessible sound that it may be surprising to hear that the band considers the EP to be something of a prelude or a “warning shot.” Hetepsa explains the band’s mindstate while working on ERE: “The songs on this project were made when we were still in the unconditioned, pre­footing stage of Camp Candle, we were still figuring ourselves out, even now we’re constantly evolving as a unit. The space we’re in now is the beginning, ERE is the pre­beginning. I wanted to name it Before the Beginning or something cheesy like that, but we decided to scroll through dictionary.com to find a word that held at least some of the meaning of our intent. We shouted words back and forth, Nu Ra found ‘Ere’ which means ‘before (in time),’ and whoop there it is.”

Talking with Nu Ra and Hetepsa about the reception to ERE and their next moves, the band was optimistic but made no grandiose predictions for the future. The emphasis was placed on growth and strengthening their connection with listeners.

“We’re just really excited to share this journey with all the people that we’re coming across,” says Hetepsa.” I don’t know man, Camp Candle isn’t just the two of us, it’s the people.”