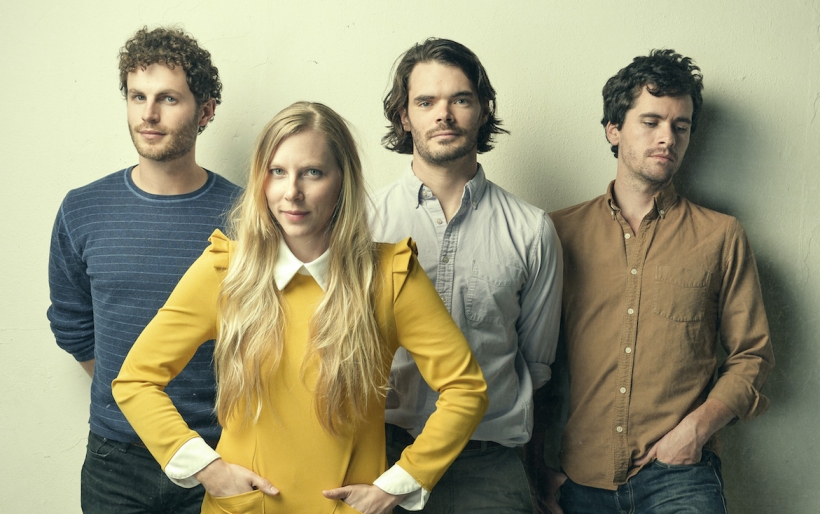 The 55th annual Philadelphia Folk Festival kicks off tonight, and over the next four days, it will explore the many definitions of folk music in the verdant fields of Schwenksville. You’ll hear heritage songsmiths like Peter Yarrow and Iris Dement as well as contemporary torch-bearers like Anderson East and The Lone Bellow, artists that draw on traditions from cajun (The Pine Leaf Boys) to French-Acadian (Vishti). With local troubadour and story-slinger Wesley Stace overseeing the proceedings along with longtime MC Gene Shay, the Festival boasts one of its strongest lineups in years, and we’re super excited to immerse ourselves in its world. We already gave you an overview of the incredible roster of regional performers on the festival; here are 14 more performers that we’re not planning on missing, and you should do the same.

This buzzing Asheville four-piece takes the tones and arrangements of Appalachian music and incorporates them into expansive songs dressed up in pop and rock. The band’s sophomore album, We All The Light, is out on August 26th and you can hear the entire thing via NPR Music right now. Below, watch the band performing in Echo Mountain Recording for World Cafe’s Sense of Place series.

This Folkadelphia-approved singer-songwriter / banjo player draws takes a traditional style of playing and pairs it with a contemporary lyrical outlook and powerful, evocative vocals. Her second LP, Nine Pin, came out last year and we’re excited to hear it live in two sets on Sunday.

You’ve heard Bakithi Kumalo, even if you don’t realize it. The Soweto bass virtuoso played on the recording sessions for Paul Simon’s Graceland, which celebrates its 30th anniversary next week. And while envisioning that incredible low-end breakdown on “You Can Call Me Al” sends our minds into frenzy, Kumalo has a formidable solo career of sunny and glorious South African pop, most recently with 2011’s Change LP.

Singer, songwriter, guitarist, activist and more…Buffy Sainte-Marie’s set on Saturday night is poised to be the most punk rock thing at Folk Fest this year. She turned a lot of heads in 2015 when her rip-roaring band turned way up at NonCOMM in support of Power in the Blood, delivering new songs with ferocity and amplifying back-catalog classics. Watch a remarkable “Universal Soldier” from that concert below.

Close harmonies, acoustic arrangements., dashing good looks, beards…there’s a lot of cross-generational action going on with Cambridge quartet Darlingside. On the one hand, their attention to songcraft is impeccable, and will purely sine from the main stage in the middle of a stacked Friday night bill. On the other, they venture far enough outside of the traditional to create a bridge to the pop world, stimulating listener curiosity and two-way traffic. Watch them perform at this summer’s XPoNential Music Festival below.

Hailing from Portland, OR via New London, CT, this band worked with Dr. Dog’s Scott McMicken to produce the new album FOGGY – the title of which may or may not be a Ryan Adams reference. All of that should point you in a general direction of what to expect when Quiet Life takes to the stage tonight: lively, crowd-pleasing rootsy songwriting blasted into the musical stratosphere.

A veteran of the national folk circuit and an always-on-the-road sort of guy, Milwaukee singer-songwriter Peter Mulvey is skilled at lyrics-forward acoustic compositions awash in wit and incisive social observations – something that’s driven his fan base at both coffeehouse shows and on YouTube. Watch a performance of “Jesus Wants to Take Your Guns Away” from his new album Silver Ladder below.

With one kick drum, an acoustic guitar, an accordion and two voices, Catherine Allan and Andrew James O’Brien make maximally minimal music as Fortunate Ones. Their portability will be something to witness on the Lobby Stage this weekend, and we wouldn’t be surprise if it winds up somewhere in the Old Pool Farm field. Watch their video for the title track of last year’s The Bliss below.

Sunday afternoon gospel shows are a high point of every Philadelphia Folk Festival, and this year, two veterans of the scene – The Fairfield Four and the McCrary Sisters – team up as Rock My Soul. They’ll bring sweet sounds to raise your spirit as the Sunday sun goes down.

Bassist Chris Wood of Medeski, Martin and Wood fame escapes his experimental prog-jazz roots and teams up with his brother Oliver for gripping, rootsy rock. Hometown hero Amos Lee is a fan, and collabed with them at their Union Transfer gig last year while they were on tour in support of their latest LP, Paradise.

If you’re even the slightest fan of roots music, your bucket list needs to include seeing Chicano rock icons Los Lobos at least ones. The band from east L.A. closes out the festival on the big stage with a bang.

Zydeco royalty Buckwheat Zydeco was originally slated to play PFF this year, but health issues have him abstaining from the road via doctor’s orders. The solution the PFF organizers came up with is just as nice: Buck’s band will play, fronted by C.J. Chenier, who was a standout from XPN’s year-long Zydeco Crossroads project.