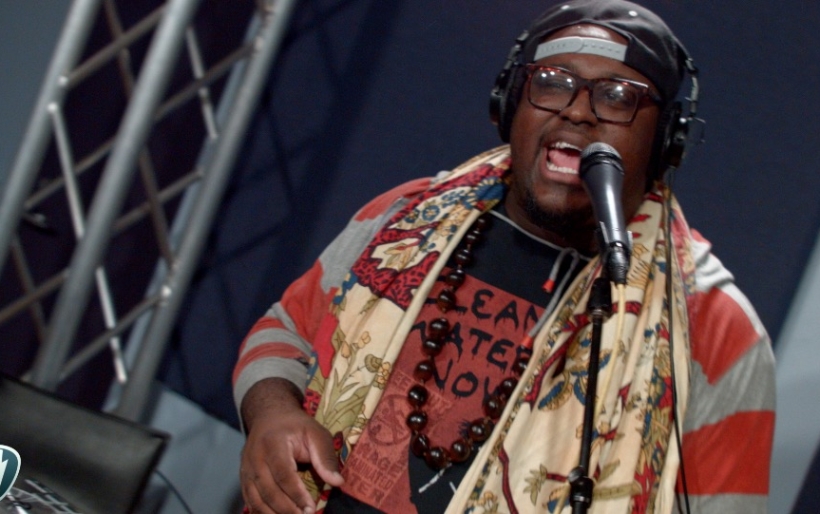 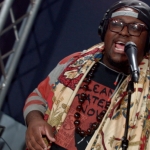 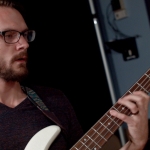 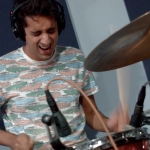 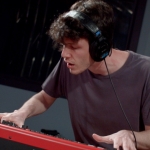 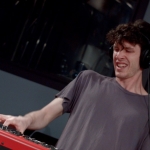 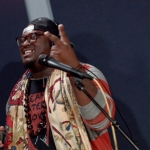 Marcus Harris has bounced around the east coast quite a bit over the past few years, absorbing a tapestry of sounds and ideas. A hip-hop kid from Florida, he got his start mixing live instrumentation with DJ-based rap while going to college in Pittsburgh, performing in the band Beatz ‘n’ Verbz. When that crew split and he moved to Philly, his new persona MH the Verb was in full effect. He dropped a bunch of funky Bandcamp mixtapes and gigged at spots like World Cafe Live while holding down a day job at a boutique record label.

Later, a stint in New York inspired him to stretch the project further into the multimedia realm. The long MTA rides from his place in The Bronx to the gallery and studio community in Brooklyn gave him a lot of time to think and plan. The song “Melly’s Walls,” which he performed in this week’s Key Studio Session, was inspired by arriving at a gallery gig early and watching as the artists hung their work on the walls; lyrics were written on the spot, and the song was recorded the next day and released on 2014’s The Balloon Guide.

These days, MH is back in Philly, and has been doing some great stuff with the production collective ArtHouse95. As he explained to our John Morrison back in the spring, the band took its name from the interstate: “95 symbolically represents I­-95. We have a strong connection with artists from New York, down to Philly, D.C. all up and down that spine that runs down the East Coast.” The first taste of this merging of creative energies can be heard on the terrific Owl EP, which has a slick jazzy undercurrent with a lyrics-forward philosophy — think mid-era Tribe Called Quest, with a booming Biggie Smalls style flow.

The configuration of players that recorded for the Key Session includes the duo Trap Rabbit – keyboard player Logan Roth and drummer Arjun Dube – with Evan “Dataf1lo” Bogunia of Tektonic on bass and Hayley Cass (formerly of Red Martina) on backing vocals.

The band’s massive seven-song set for us features some back catalog cuts – “Melly’s Walls,” as well as “Better Way,” a poignant song from Owl written for MH’s brother as he serves in the military. There’s also a dope cover of MF Doom’s “Valerian Root.” But most significantly, the session features four new songs from the forthcoming Volume One, with the exceptionally talented crew of players jamming them to expansive proportions.

“Traffic” is a song about our compulsion to rush through life; the band relaxes it out to seven jazzy minutes, complete with incredible solos all around – seeing it in action in the above VuHaus video, you can tell what an accomplished ensemble this is.

On the other hand, there are strong lyrics in this set; if you’re moved by what you hear in “Better Way,” I’d suggest digging in to “Last Dance in Paris,” a song MH wrote in response to the climate surrounding the Bataclan attacks in November. It’s about tragedy, and it’s about perspective: how the media’s rallying response to Paris obscured atrocities in other parts of the world. “Why we pray for Paris, never pray for Syria?” raps MH. “Bombs in Lebanon but where was the hysteria?”

That’s the crux of what MH the Verb and ArtHouse 95 do — they jam out and bring the party (on songs like the opening rager “Teeter Tot”) and they make you think about issues like racial discrimination, incarceration and inequality (“Over and Done”). Dig in by streaming this week’s Key Studio Session in its entirety below; you can grab a free download via Soundcloud here, and catch MH the Verb x ArtHouse95’s release party at Silk City on September 7th. Tickets and more information can be found at its Facebook event page.