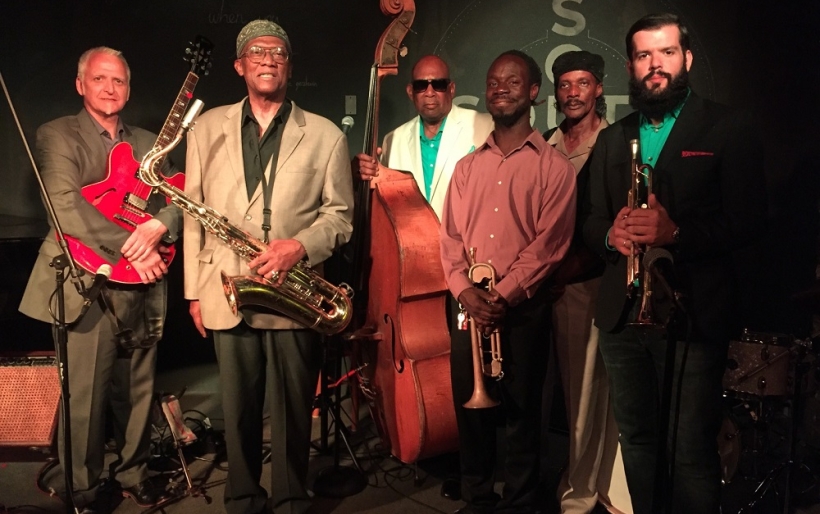 With the onset of fall comes the beginning of new artistic seasons, and several strong line-ups will kick off over the next month or two. That includes an especially thrilling Lively Arts series at Montgomery County Community College, a run of heavy-hitters at the Kimmel and Annenberg Centers, and a typically exciting run of boundary-stretching artists from Ars Nova Workshop, including a slew of AACM-related shows in conjunction with the ICA’s must-see exhibition “The Freedom Principle.”

But whether summer travels have locals settling back at home or just sheer coincidence, September is a particularly strong month for local artists and projects with local roots. Of course there’s the 90th birthday celebrations for former Strawberry Mansion resident John Coltrane, which I’ll cover at length in a later piece, but also the following string of Philly-centric shows.

The Art Museum’s Art After 5 series hosts a run of local favorites, beginning with a tribute to classic crooners like Nat King Cole and Frank Sinatra by Valray Sturgis on the 2nd, trumpeter and Jazz Orchestra of Philadelphia director Terell Stafford with his quintet on the 9th, and busy vocalist Michelle Lordi on the 16th.
Fridays, 5 p.m., Free with $20 admission, Philadelphia Museum of Art, 2600 Benjamin Franklin Pkwy., 215-763-8100

Kurt Rosenwinkel went from the halls of CAPA during what now seems to have been an enchanted period at the school (his classmates included Christian McBride, Joey DeFrancesco, and members of The Roots) to become the most influential guitarist of his generation. He’s maintained strong ties to the city, however, including his recent appearance on Orrin Evans’ new album #knowingishalfthebattle (Smoke Sessions) and this project, a collaboration with Philly guitar wizard Tim Motzer and Swiss drummer Gintas Janusonis. The band came together not in the two axmen’s shared hometown but in Zurich, where the Berlin-based Rosenwinkel was in the audience for a performance by spoken word artist Ursula Rucker on which Motzer was playing. Together, they conjure layered, spacy soundscapes… Essiet Essiet on bass and Mark Whitfield Jr. on drums.
Fri.-Sat., Sept. 9-10, $25-$30, Chris’ Jazz Café, 1421 Sansom St., 215-568-3131, chrisjazzcafe.com

Though the light rain that fell on last year’s festival didn’t necessarily deter audiences who turned out on South Street, the Philadelphia United Jazz Festival is nonetheless heading back indoors for its fourth incarnation. As always, founders Warren Oree and Graziella D’Amelio, who were also the creative forces behind the West Oak Lane Fest, are keeping the focus on the locals. This year the festival is expanding from one day to five and occupying four venues across the city, culminating in a 12-hour day of music at South on Saturday the 17th. Though they’re insisting on a “no headliners” approach, highlights include a tribute to local legend Bootsie Barnes, a Grover Washington tribute from Gerald Veasley (who’ll also be honoring the late saxophonist with keyboardist Jason Miles later in the month – see below), a Coltrane tribute from Oree’s Arpeggio Jazz Ensemble, and a performance by drummer G. Calvin Weston.
Wed.-Sun., Sept. 14-18, various venues

Saxophonist Norman David has led different line-ups of his Eleventet since the early 1980s, but the Philadelphia version, active since 2000, has become its longest-lasting and most productive incarnation. Since 2007 the ensemble (one guess how many members) has taken up residency at Plays and Players, honing their unique approach featuring the powerhouse sound of a big band with the flexibility and spontaneity of a small group. This month’s show not only kicks off another season at the theater, but celebrates the first of two new CD releases: Please Call, the Eleventet’s second studio release, will be available at the show, while a live follow-up will coincide with their 100th performance at P&P next spring.

Jason Miles isn’t from Philly, but he’s spent time in Mt. Airy as a guest of the late saxophonist Grover Washington, Jr. He returns the hospitality in Washington’s hometown with this evening at South dedicated To Grover… With Love. The keyboardist, best known for his association with Miles Davis during the ‘80s, has released two albums with his funky Washington-inspired project, the latest recorded live in Japan. Both feature South’s Thursday-night curator, bassist Gerald Veasley, who will be onstage for this incarnation along with Philly-born saxophonist Andy Snitzer, on a break from his touring duties with Paul Simon.
Thu., Sept. 29, South, 600 N. Broad St.