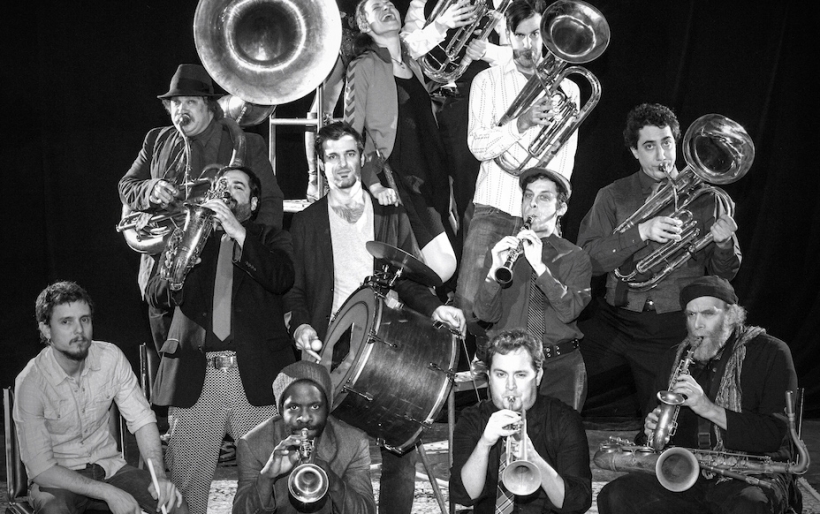 It was a treat when West Philadelphia Orchestra digitally re-released their debut album in July, taking a minute to look back at the early days of the Balkan folk / brass band that has become such a stalwart presence in the local music scene. The release was also the launching pad for a new global music label called Fly Bottle Records, which will be home to the outfit’s newest effort, Tour de Filli. The record is set to come out on September 27th, but the band has been kind enough to give us a sneak peek of lead single “Flying Solo” today.

With an ear always towards making their live show as inclusive and explosive as possible, “Flying Solo” opens with a chorus of clapping and singer / accordionist Petia Zamfirova’s layered vocals before introducing the full force of WPO’s two dozen-plus members. While many songs in the band’s discography are either instrumental or sung in other languages, “Flying Solo” pairs WPO’s dynamic arrangements with English lyrics about the end of a relationship.

Flying Solo features our vocalist, Petia Zamfirova about regaining the independence that we sometimes trade for love. Sometimes “broken beats and beer” are just what you need to find yourself again. Petia got creative with the looping and the trumpet solo is rather rock star.

Tour de Filli has been a long time in the making, and it features 10 original covers and 1 Balkan classic. Petia is front and center on the album, singing in English, Bulgarian and Romani. It was recorded in several studios around Philly, and is a huge sonic leap forward from our previous releases. The influence of Balkan brass traditions is still strong, but there’s so many other elements involved, from dancehall to indie rock to free jazz.

Tour de Filli is out Tuesday, September 27th, and of course it wouldn’t be a West Philadelphia Orchestra event without a parade: the band will celebrate the album’s release later that night at Franky Bradley’s with three sets, a happy hour and a communal strut down the street. If you can’t make that show, catch the band at International House on September 30th; more information for that all ages gig will be available here.