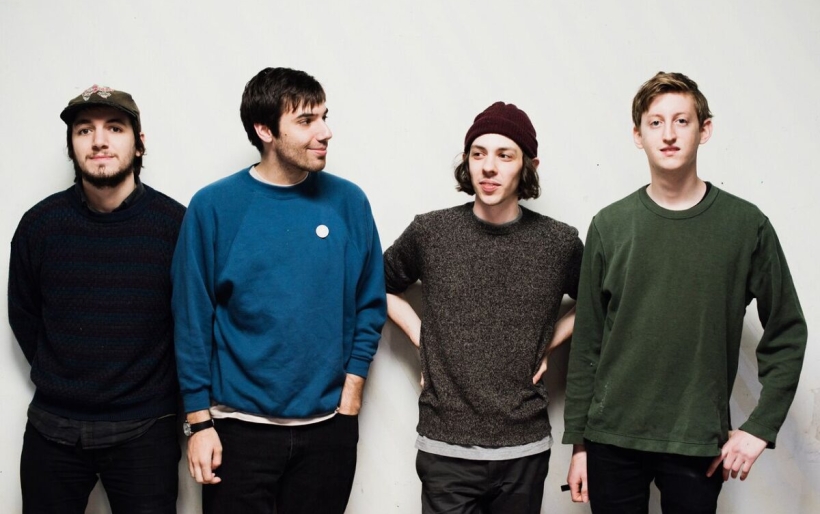 LVL UP | photo by Shawn Brackbill

INTERVIEW: Brooklyn indie darlings LVL UP on making their most fully realized album, Return to Love

After five years and a couple of releases circling the grittier home-recorded periphery of the indie rock universe, the band goes full in on it’s third long player, released today on Sub Pop Records. Fuzzed out punk gives way to pristine pop, and you’ll hear hints of Neutral Milk Hotel and Pavement as much as you will Nada Surf and Fountains of Wayne. In short, it’s their most fully realized album on the sonic front, and talking to singer-guitarists Mike Caridi and Dave Benton, the guys are remarkably level-headed (ugggggggh, #dadjokes) and earnest about their craft.

I caught up with them via phone from Benton’s apartment in the Bedford-Stuyvesant neighborhood of Brooklyn. It was a hot August day and the band was laying low; they didn’t have anything on the calendar until a music video shoot the following week and a gig at Hopscotch fest in early September. Below, read our conversation about recording, running a label, and how their band and business lives intersect.

The Key: There’s a definite progression between albums; you’ve described Space Brothers as more of a compilation, Hoodwink’d as your first focused collection. How did the process differ with Return to Love?

Mike Caridi: We were probably more selective this time around with songs we decided to include. We went into a studio and had a plan of what we were going to record. A little more mental preparation and stuff like that. But not too much…I think we’ve always winged it to some degree, there’s no grand scheme.

Dave Benton: I think some of the biggest things were the studio and working with an engineer / producer person. Mike [Ditrio]was able to hone in on the sound of the album, whereas past albums with him had been a bit disjointed. He’s worked with us forever, but he mixed hoowdink’d and mastered Space Brothers.

The Key: So what does it mean that Mike produced this time around – his role expanded from your previous two records?

DB: Totally. Basically, we flew him out – he lives in Washington state – and he spent a full month in the studio every day. Whereas before, he was helping us mix, a couple days here, a couple days there. Now this was our project, we were all working on it.

The Key: And you were working in a situation where you had a concentrated block of time where it’s like “stuff has to be done by this date.”

MC: We put deadlines on ourselves. There wasn’t necessarily a deadline set from Sub Pop that “we need it to be done by this time.”

DB: We really wanted the record out this year, and thankfully we were able to do that!

The Key: Where did you record?

DB: Seaide Lounge in park slope Brooklyn. We were there for like 20 days, Mike was around for a month.

The Key: Let’s talk about releasing with Sub Pop, versus doing it on your own label Double Double Whammy – was there any sort of sense of heightened expectation?

MC: They were pretty hands off throughout the whole process of making the record. The person at the label who has been our main contact from the beginning was a fan already, knew about our label, knew album the bands we had been working with. They knew a lot about LVL UP. When we talked with everyone at Sub Pop, we told them we’ve always been very hands on. We’ve done the recording ourselves, working with our friends, releasing on our own label. They really respected that, and let us have that same control while helping bring it to a larger audience.

The Key: Why decision to expand, then? You’d made a decent impact going it alone.

DB: We all had this talk before we were ever approached by Sub Pop where we were like, we want to find somebody else to release this record. I think that was just because Mike and I, who run the label, we just found it difficult for us to give enough attention to our own bands. Because Double Double Whammy has a handful of awesome artists and it’s hard to prioritize yourself when you have other people you want to make happy and give attention to.

MC: And in that talk, we had had made a dream list of the labels we want to go with. While we didn’t want to do it ourselves, we didn’t want to settle and do it with just anyone. Sub Pop was one of the names on that list, and they actually approached us…so it was pretty cool.

MC: I think doing the band has helped to inform the way we run the label a little more than vice versa. We run Double Double Whammy the way we want to see a label operate, we handle the bands the way we want a label to handle us. Or at least we try to the best we can with the resources we have. We give super fair if not way more in the band’s favor deals.

DB: I Think being in a band has helped keep the label, I don’t know what the word is…grounded. Never dark-sided.

The Key: It feels very similar to Merge Records in a way. I got to visit their offices in Durham earlier this year, and it was super cool to see what a tight operation they have going. But in the beginning, it was just a way for Superchunk to put out records.

MC: Merge and K are two labels Dave and I always talk about and modeled Double Double Whammy off of.

DB: I think a lot of those big indie labels, they seem like big companies, and they do make a lot of money, but at the end of the day, they’re started like people like us. I feel like we could relate to those types of people.

LVL UP’s new album Return to Love is out today on Sub Pop Records, and can be ordered here. The band plays PhilaMOCA on Sunday, September 25th with Marge and Permanent Body; tickets and more information can be found at the XPN Concert Calendar. Below, listen to the band’s recent feature spotlight on NPR’s World Cafe with David Dye, and check out their full roster of fall tour dates.