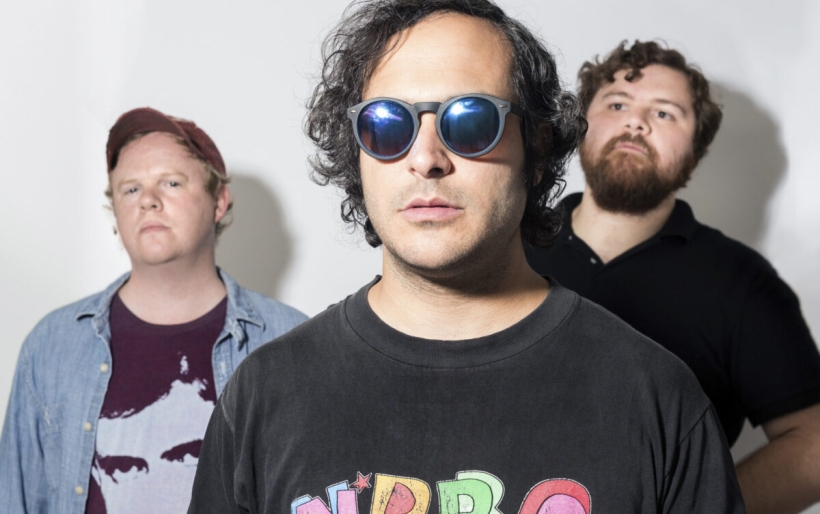 The whir and steady crackle of coffee grinders hard at work fill Higher Grounds, a small trendy coffee shop in Northern Liberties. It is the kind of place that revels in its unique blend of styles. The flea market seating, the posters and paintings and art pieces whose only discernible style is a difficult to define panache. It has a confidence and intentionality that resists coming off as anything but genuine and patiently accumulated through years of collection. Sitting across from me towards the back of the shop is Mike Polizze, front man and songwriter for Purling Hiss, whose aesthetic, and brand new album High Bias due out October 14, feel equally as earned.

“I am pretty excited to go out and show it to the world. It is just a long process that by the time something comes out,” said Polizze of the anticipation involved in waiting for the record’s release. “The songs aren’t that old but I will say that we took our time with this one.”

In truth, it has been about two years since the release of their last full length, the rollicking and excellent Weirdon, and like most of his work, it is hard for Polizze to say exactly when High Bias began to take shape. “I don’t decide, today is the day I am starting my next album,” Polizze said about his fluid writing process. “Some of the riffs are like fifteen years old, just something I was messing with and had on some old recording.”

Whenever the writing began, the album truly came together in fall of 2015 when Polizze and the rest of the Purling Hiss rockers, which include Ben Leaphart on drums and Dan Provenzano on bass, hit the studio with Philly mainstay and longtime collaborator Jeff Zeigler. Polizze and the gang first worked with Zeigler – who has recorded albums with the likes of The War on Drugs, Kurt Vile and countless others – back in 2013 for Water on Mars. The singer and songwriter looks back at their first experience with Zeigler fondly as a time of evolution for both himself and the band. Not only was Water on Mars the first album released with Chicago-based indie label Drag City, but it came at a time when the band was still transitioning from a homemade side-project to full-fledged rock band. Longtime fans of Purling Hiss likely noticed a stark difference between the bedroom, four track recordings that characterized their early work and the more polished sound that emerged with Water on Mars, a difference that makes perfect sense if you understand the band’s history.

“Some people don’t realize that those early recordings are just me,” said Polizze a bit shyly. “Those songs were literally just personal demoes to jot down for reference. I ended up showing them to people and I definitely got lucky in some ways and got them put out and that became the identity of Purling Hiss in the beginning.”

Though Polizze still writes in very much the same way, the band began to adopt a much fuller sound with the move to Drag City, a transition made easier with the help of such an experienced producer like Zeigler. “I just felt like I was just so green, so wet behind the ears with it,” said Polizze of this experience. “I was still super stoked with the first album but that was kind of the growing pains.”

Those growing pains began to establish Purling Hiss as a full-fledged power-trio and while Polizze recognizes that this drastic change in sound may have thrown some listeners off, he assures me that the bare bones of Purling Hiss remain unchanged. He still spends hours on his own crafting the songs using little more than that same four track machine, he still relies on the direct line from idea to tape that this method provides, but he also recognizes how important variety can be in keeping their sound fresh. “It seems like the very next thing that I put out is always going to be different than the last thing I put out but I do like to circle back and return to things.”

What makes High Bias stand out, though, is the fact that it is not really a return to anything but a culmination of all the bits and pieces of Purling Hiss that have made them such a consistently intriguing band. The blend of the lo and hi-fi, the woozy, perfectly abrasive wall of electric guitars and the steady, romping drum beats all form something that feels both thoughtfully refined and spontaneously chaotic, all of which is far from unintentional. We are now deep into our conversation, and Polizze is walking me through each track of his hotly anticipated new record High Bias with a passion that simmers like one of the fresh-made lattes being passed to a customer over his shoulder. He is deliberate in describing each bit of influence for every track, careful to not pigeonhole his writing while trying his best to paint a distinct picture of how High Bias was slowly born into existence.

This isn’t a man rattling off press fodder with an eye toward getting on with his day, but an artist who has clearly thought through these answers long before our discussion began. He cites such wide influences as bands like Suicide and The Stone Roses to Krautrock and Dream Syndicate, not to self-aggrandize but to illuminate. Polizze may enjoy the idea-to-tape nature of home recording, but he clearly relishes the chance to fully form an album of his own vision, something he got to do in spades with High Bias.

In the past, circumstances made it so Polizze and the band recorded their albums in only a couple of studio sessions, knocking out complete songs at a time with a fairly strict time constraint, but with High Bias time was much less of a factor. “We took our time with this one,” said Polizze. “We really spaced out the days, and actually only did around two days a month.”

Part of what made this possible was convenience. With both Zeigler and the band decidedly Philly-based the group had time to record at their leisure, choosing to consistently return to the work rather than try to complete it only one or two sessions. Polizze talks fondly of this process, citing how the schedule allowed him to let the songs breathe and to attack them with a more nuanced approach. He references songs like “Everybody in the USA,” the album’s high-flying jam of a finale, as largely being born in the time in between recordings.

“Sometimes you go in and record and you hear something a little different and you need some time to think about it,” Polizze says of the benefits of the gradual approach. “It gave me a chance to get stuff from Jeff to listen to for reference in between sessions. When you go in all at once you can get a little overwhelmed.” What this method produced is an album chock full of the kind of thought and reflection and mastery that comes from years of producing; something new and exciting without ever losing sight of what connected with listeners from the beginning. It is not surprise to hear, as our interview wraps up, just how excited Polizze is to get out and play the album for fans hitting up the venues along the band’s upcoming US Tour. High Bias is a culmination of everything Polizze and the rest Purling Hiss have been working toward since day one, and fans new and old will be not be disappointed with the result.

Check out the brand spankin’ new single “3000 A.D” from High Bias below as well as dates for the band’s upcoming tour, which kicks off this Friday. They will be back in Philly on October 30th for a homecoming gig at Johnny Brenda’s. Tickets and more information on the 21+ show can be found at the XPN Concert Calendar.