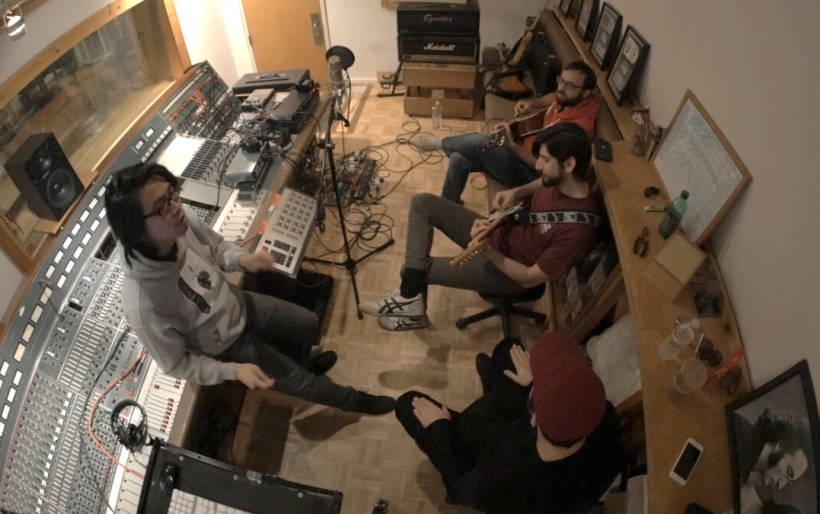 Stars Align: Secret Space and Will Yip on collaborative magic at Studio 4

Dean Tartaglia and Will Yip both agree: the song that kicked their collaboration into overdrive was “Stars.”

The singer-guitarist of Toledo punk outfit Secret Space was in Conshohocken’s Studio 4 with Yip for a recording stint; late one night, long after work for the day had wrapped, Tartaglia shot Yip a voice memo from his phone.

“It was just the chorus,” Yip remembers. “And I knew. ‘We have to record this tomorrow.'”

Yip has become a revered producer over the past ten years, working with punk, indie and modern rock luminaries like The Wonder Years, Balance and Composure, Nothing, Circa Survive, Tigers Jaw and more. Many of whom happen to hail from the greater Philadelphia region. But Yip’s resume and influence stretches well beyond the local scene, and he connected with the midwestern up-and-comers in Secret Space via another band he’d produced, the post-hardcore outfit Citizen — who are also Ohioans. The two bands had toured together, and when Citizen was recording its 2015 record Everybody Is Going to Heaven with Yip, Tartaglia was brought in to play saxophone on that album’s “Yellow Love.” That broke the ice, Tartaglia remembers. But his band was not at the point of doing its own full-length yet; it was still in its infancy, working with Citizen’s Matt Kerekes back in Toledo to record their previous singles and EP in an informal home studio setting.

“When we worked with Will, that was the first time we went in with a real producer with a vision for what everything sounded like,” says Tartaglia. Having a totally outside perspective helped, he continues: “A lot of times it was Will saying ‘I see this differently from you guys.'”

Secret Space’s first experience recording with Yip came during a one-day session later that year for their split 7″ with The Flats — a band fronted Kerekes’ older brother Chris — which was released on Yip’s boutique label Memory Music in February. “Literally an hour into working with Secret Space, I knew I would work with them for the rest of my life,” Yip enthuses. “Or the rest of the lifespan of the band. I fell in love with them immediately.” Likewise, when Secret Space set out to record their Equal Vision Records debut, The Window Room, they knew they wanted to work with Yip. They came through late last year for a three-week block of studio time, an immersive approach that was new territory for Tartaglia.

“For me, this was my first experience leaving home and working in the studio for three weeks,” he says. “It’s still the most rewarding thing I’ve done musically. You just get to live in your songs and that’s a really nice luxury. Every other studio I’ve ever been to, you just get to go in for your six hours and that’s it for the day. It always kind of drove me crazy.”

Yip’s approach is more holistic — rather than start out by recording drums for every song, for example, and then following up with guitars for every song, and then vocals, he takes it song by song, building up each chapter to its maximum potential before moving on. The resulting collection of songs is also a fluid thing.

“I always make sure to tell bands that just because we started with eleven songs doesn’t mean those will be the eleven songs on the record,” Yip explains. “So, if there are any ideas that come up while you’re here, lets collab on them — because that’s what I think I do best.”

Which is how “Stars” happened. Secret Space was spread around Studio 4, everybody working on different components of the song at hand, and Tartaglia — who had some downtime — was working out a sketch of an idea, recording it into his iPhone. “When he sent me that voice memo it was literally at 1:30 in the morning while I was editing their stuff at home,” Yip laughs. “Even if we aren’t all together working on it, someone is always working on a song. It’s a moving thing and we are all working on it together.”

Tartaglia admits he had a little bit of tunnel vision when he first arrived at the studio. Some of these songs he brought, he’d been writing and re-writing for years — ideas saved from demos for old bands that never came to fruition, but that he still felt strongly about. The themes of “Stars” came from one of those earlier demos; Yip says he enjoyed parts of it the first time he listened, but he and Secret Space agreed it was the weakest of the bunch they entered Studio 4 with. Tartaglia wasn’t ready to give up, and kept tinkering with the idea. When Yip heard the voice memo, he was energized, and they spent the next day bouncing ideas off one another, helping it take a new shape.

“I didn’t even think twice about trusting him to steer us in the right direction,” Tartaglia says. “It just kind of escalated that one morning. That’s what I like about that song, lyrically too it’s about not overthinking stuff and just reacting in the present during a situation of urgency. It just feels really honest, looking back on it, for who I am as a songwriter and who we are as a band.”

“We built it up and it just came naturally,” adds Yip. “Every decision we were making just worked, and that’s pretty rare for that to happen.” “We pretty much co-wrote it,” Tartaglia continues. “I don’t think we would have had the right creative flow without Will.”

The Window Room came out in June on Equal Vision, and it sounds terrific — thundering drums, soaring guitars, a mix of brutal crunch and atmospheric beauty. On the one hand, it definitely feels like it’s got Yip’s stamp on it, but it’s hard to define that stamp in terms of sonics. And Yip prefers not to think of it that way. I asked if he finds artists coming to him wanting to achieve the vibe of his previous records, and he says he couldn’t be more against that approach.

“I think a lot of people come to me for the complete opposite reason: because they know I’m not afraid to do something different,” Yip says. “I don’t like to pigeonhole myself into a sound. My goal is to be a chameleon and join the band.”

Secret Space plays Union Transfer on Saturday, October 1st opening for Anthony Green. Tickets and more information on the show can be found at the XPN Concert Calendar. Read our interview with Anthony Green here.