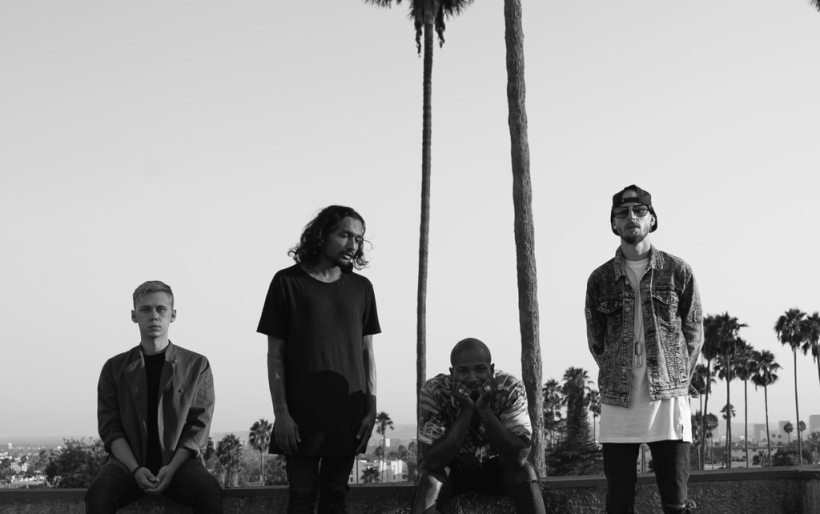 A masochistic journey of self discovery: A review of HUNTR’s self-titled debut album

After listening to the first track on L.A. band HUNTR‘s self-titled album, my first instinct was to text all of my close friends to ensure that they didn’t spend one more moment ignorant of the existence of this group.

Its eleven-track self titled debut is aggressive and unapologetic when it comes to the potentially jarring images created by their music. And it totally works for them. The LP opens with the gripping “Veins.” This track is carried by what sounds like notes from a synthetic violin played by multi-instrumental Boris Likharev while Philadelphia-bred frontmen Gilbere Forté and Raak Aveli handle for vocals and Nick Audy rocks the drums. Words are a pathetically inadequate way to describe the power that radiates from this track, but for the sake of this review, it must be done.

A dynamic symphony of piano notes, bass, drums, the rapping of Forté, and the eerie vocals put forth by Aveli are pretty unsettling upon first listen. For those who have read Sylvia Plath’s “The Bell Jar,” you are familiar with the way the text leads you to question your sanity without ever explicitly asking you to do so. “Veins” achieves a very similar effect in a significantly shorter amount of time and with fewer words. The band just released a music video for this track that is the perfect marriage of audio and visuals that best represent the artistic intent behind the song. It has the potential to be a very subtle political statement piece, but it isn’t clear. Check it out below to try and decide the matter for yourself.

The first five tracks of the LP remain consistent with the the theme of masochistic self discovery and justification. This is pretty overtly represented on the track “Stabbing Me” with lyrics like “Why is it so hard to breathe? Maybe it’s cause I’ve got a f—–g knife stuck inside of me / I never thought to kill myself but living with who I was it’s challenging / Just keep stabbing me.” Each of these five tracks is laced with anxiety-inducing distortion and mesmerizing synthetic violin.

The sixth track “10,00 Hours” is a melodic interlude, allowing listeners to prepare themselves for the next chapter of the album — and that next chapter is on a completely different planet than all of the material before it. “Sunset Blvd.” is a primarily acoustic ballad, detailing one of the vocalists’ time in California while he was living on a friends couch.

The theme of self exploration is addressed in the last three songs, and made very obvious on tracks like “Find Myself.” Content wise, the concluding track “Sundown” allows listeners a sense of closure with lyrics like “Everything you wish to be you already are / You just don’t know.” But at the same time, it feels like a weak finish when compared to the ferocity of “Veins.” In structuring songs around the narrative, HUNTR lost their sonic momentum as the album continued; a different sequence might have been more engaging.

This eclectic modern rock / hip-hop band was formed in 2015, and produced an impressive first LP in a small amount of time. The first five tracks would have made for an unforgettable and conclusive EP on their own, but HUNTR chose to continue the narrative and take it to an entirely new realm of subject matter.