25 Years Was Worth It: Temple of the Dog plays its first official show at the Tower Theater - WXPN 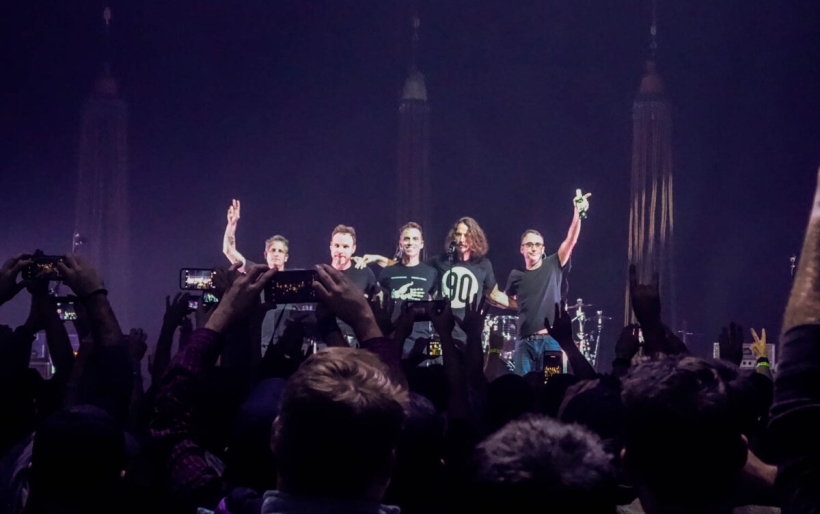 25 Years Was Worth It: Temple of the Dog plays its first official show at the Tower Theater

It was a show 25 years in the making, and there was only one city strong enough to play host.“Philadelphia, this is the first Temple of the Dog show!” frontman Chris Cornell howled as he took the stage before a sold out crowd on Friday night – the first of a two-night run at the Tower Theater kicking off Temple of the Dog’s limited-date 25th Anniversary Tour.“And we did that on purpose, just so you know,” he continued as the band spread its arms wide with the flourishing opening chords of “Say Hello 2 Heaven”.

No details were offered as to why Philly was bestowed with the honor of setting the stage for the first official Temple of the Dog show, but to say it was special would be a wild understatement.The story of Temple of the Dog is perhaps one of the most legendary of our time.Conceived in 1990 as a tribute to the late Andrew Wood, lead singer of seminal Seattle band Mother Love Bone, Temple of the Dog brought together Chris Cornell and Matt Cameron of Soundgarden with ex-Mother Love Bone bandmates Jeff Ament and Stone Gossard who, along with guitarist Mike McCready, were in the early stages of forming a little band called Pearl Jam.

In 1991, Temple of the Dog released a 10-song self-titled debut, its first and only album.Upon initial release, it flew under the radar as Soundgarden and Pearl Jam were swept away in the grunge tornado that defined rock music in the early 90’s.It wasn’t until a full year after the release of Temple of the Dog that record executives realized they had material from a veritable supergroup on their hands and began promoting it as such.But it was too little too late, and some would say Temple of the Dog was over before it even began.

25 years later, as they took the stage atthe Tower Theater for their first real show together, nostalgia was not so much a theme for Temple of the Dog as was a pure love for music and the enduring bonds created in its name.Perhaps that’s why it had to happen in the City of Brotherly Love.We were truly watching a band of brothers.Dressed similarly in all-black attire (a move that was perhaps funerary in nature) they created a monochromatic effect under minimal lighting as they dug deeply through the rich religious iconography of “Wooden Jesus” and “Your Savior” – a move that was later echoed by the unveiling of a larger than life wooden statue bearing the likeness of Andrew Wood, his arms outstretched in a messianic pose. The early set was capped off with two back to back Mother Love Bone covers, “Stardog Champion” and “Stargazer”, which Cornell presented with a few words about Wood and an explanation that they had chosen to pepper the setlist with covers of the Mother Love Bone songs that would best share his spirit.The sheer joy emanating from the stage stood in direct contrast to the stripped-down canvas with which they greeted us.

Gears shifted with “Seasons”, a solo acoustic track recorded by Cornell for the soundtrack to the 1992 movie Singles.Kaleidoscopic spotlights shot from every angle as Ament, Cameron, Gossard and McCready breathed a healthy dose of color into the mellow, moody track.As the crowd swelled, the air grew heavier and in turn, the band began to grow tentacles, both sonically and visually.  Six ribboned chandeliers were raised from the floor to the ceiling, dramatically altering the height and depth of the stage.Under a blue-green light, the chandeliers looked like giant mutant jellyfish floating toward a water’s surface.The rest of us were anchored to the floor as though we were under the sea and blissfully drowning in sound.If we were underwater, Cornell was our Poseidon.Before him, we all struggled to find our sea legs. Now I’m sure as you are reading or maybe skimming through this, you only want to know one thing – did Eddie Vedder make a cameo during “Hunger Strike”?No, he did not.Temple of the Dog was quick to answer that question, planting their one major hit in the middle of the set rather than saving it for a set closer or encore.I’ll be the first to admit to feeling a little sting once Vedder’s verse began and he didn’t appear from the shadows.But Cornell held out his microphone for the crowd to step in for Eddie.That one move allowed the band to gracefully detour around hopes of a Vedder cameo, instead allowing the audience to appreciate the band for what it is – not Pearl Jam, not Soundgarden, but a horse of a different color, a truly unique beast.

Things grew heavier and more surreal as the band worked its way to a grand finale.Several covers like Harry Nilsson’s “Jump Into The Fire” and Bowie’s “Quicksand” helped maintain an air of unpredictability as the band flew through Temple of the Dog’s material, leaving Cornell to gleefully proclaim, “We’re running out of songs!”  But they weren’t running out of time.  The spotlight trained on Cornell shifted several times to McCready, who treatedus to just the right amount of guitar solos while expertly avoiding indulgence and showboating.Ament, Gossard and Cameron kept their heads down in concentration for most of the show, toiling away like mad scientists concocting the world’s most potent drug.Having seen Pearl Jam several times, it was unreal to be so close to these guys, not in a massive stadium amongst several thousand screaming fans but in a room that was tuned to perfection, allowing my ears to revel in the intricacies of their sound.My eyes kept darting about the stage, trying to identify the source of a particular sound.

After wrapping up the pre-encore set with “Reach Down”, Cornell returned to the stage solo for an acoustic rendition of Mother Love Bone’s “Man of Golden Words”, the lyrics from which Temple ofthe Dog takes its name.It was the one somber moment in an otherwise overjoyous evening.I had to close my eyes to make sure I was taking it all in as Cornell sang, “Let’s fall in love with music/The driving force of our living”.His voice is like your favorite blanket – broken in and rough in all the right spots but smooth as velvet everywhere else.You just want to roll up in it and live there forever.That feeling that was only amplified once he was rejoined by the rest of the band for a jackhammering cover of Led Zeppelin’s “Achilles Last Stand” followed by a dark, creepy and insanely heavy version of The Cure’s “Fascination Street”, which left me feeling the need to scrape pieces of my grey matter off the floor.God, I hope they put out a live recording of that one day.

After ending the first encore with Black Sabbath’s “War Pigs”, the band returned for a second encore, wrapping up the evening beautifully with “All Night Thing”, the final track from Temple of the Dog.Even though the show clocked in at over two hours, I didn’t want it to end.  For a moment I thought the inclusion of “All Night Thing” suggested it didn’t have to.But I was smiling ear to ear, the lyrics “if it’s an all night thing, nobody’s gonna make it end/and if it don’t begin, don’t worry that I’ll take offense” echoing in my head as the band lined up at the edge of the stage, arms around one another, to take their final bow.These men may have spent the past 25 years becoming our rock gods, but in that moment they returned to the place where they began – simply as a group of friends finding solace in music in the face of unspeakable grief.  As Cornell stepped up to the microphone one last time, he bid Philly farewell by declaring, “25 years was worth it.Thank you for waiting”.