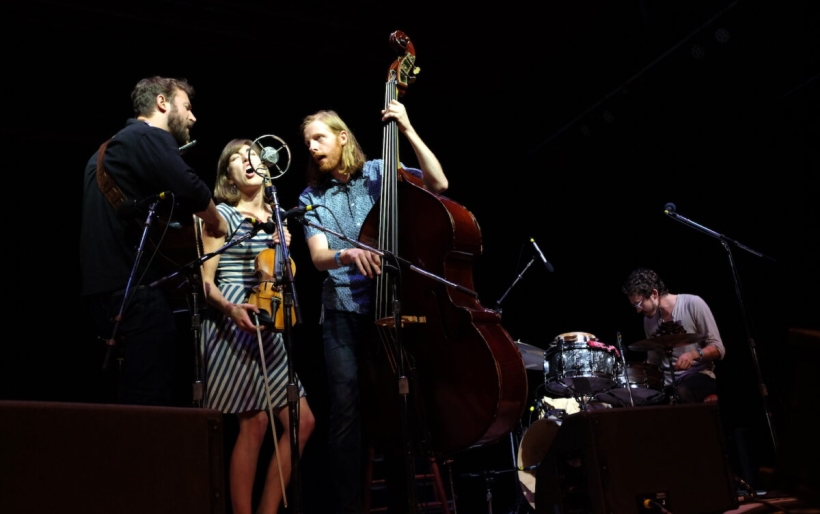 The Stray Birds | Photo by John Vettese for WXPN

Listen to The Stray Birds’ session and interview on World Cafe

This August, Lancaster-rooted folk outfit The Stray Birds released its fourth album, Magic Fire. It’s a showing of growth for the band; the songwriting is more sophisticated and production is more expansive, with the core trio of Maya de Vitry (vocals, fiddle), Oliver Craven (vocals, guitar) and Charlie Meunch (vocals, bass) were joined by an outside producer (Larry Campbell) for the first time. They also expanded their live sound with drummer Dominic Billett, formerly of Toy Soldiers.

During their recent interview on NPR’s World Cafe, de Vitry characterized that growth by saying “It’s become a more open, creative collaboration from the beginning of the process. We’ve grown in the way we communicate when we actually play music together.”

Listen to The Stray Birds’ World Cafe Session with David Dye below — it features performances of “Shining In The Distance,” “Third Day In A Row” and “Sabrina.” The Stray Birds have two performances coming up this fall; on December 14th, they’ll be at Tellus360 in Lancaster, and on December 16th, they’ll headline World Cafe Live in Philadelphia. Tickets and information on both shows can be found at the XPN Concert Calendar.