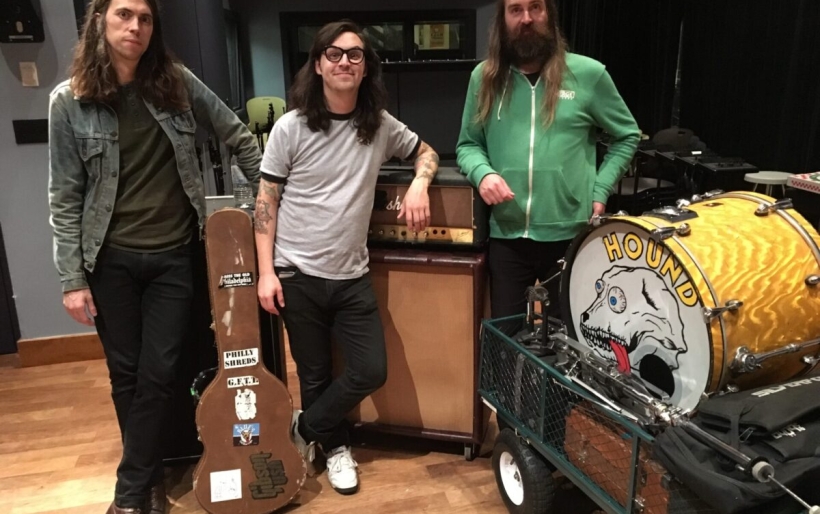 It’s been a rough week, people. That’s to put it lightly. There’s a lot of aggression in the air, a lot of frustration, and we’re collectively in need of some release. Thankfully HOUND is here to help.

The Philly rock and roll power trio are favorites of ours around here at The Key. Singer-guitarist Perry Shall first caught our ear in the lively surf-punk band Dry Feet, and is a talented visual artist in addition to a badass musician: he has designed t-shirts and album art and gig posters for folks from Modern Baseball to Mannequin Pussy, Hurry and more. Bassist Patrick Hickey hails from the jagged and atmospheric post-punk outfit Shape Breaker. Drummer Chris Wilson is best known for tub thumping in Ted Leo and the Pharmacists, though he’s been touring with Titus Andronicus of late. Basically these are three dudes seasoned in amped up garage / basement catharsis, and the four songs they performed live for us absolutely rage.

Some points of reference: there’s a serious Stooges / Motörhead underbelly to their riffs and wiry energy. “Mortality Jam” and “Cold Blooded” hail from Out Of Space, the LP HOUND released last fall. (Its 2014 companion: Out of Time). “Born Under a Blacklight” can also be heard on the Live! At Golden Tea House “bootleg” that came out this year on SRA Records. “Eyes In The Dark” is new and making its debut right here.

If you’re like us, streaming these songs below and turning them up very loud will feel crazy good this afternoon; seeing them in person tonight at Ortlieb’s, even moreso. Get tickets and more information on the show at the XPN Concert Calendar, and download the session here, via Soundcloud.