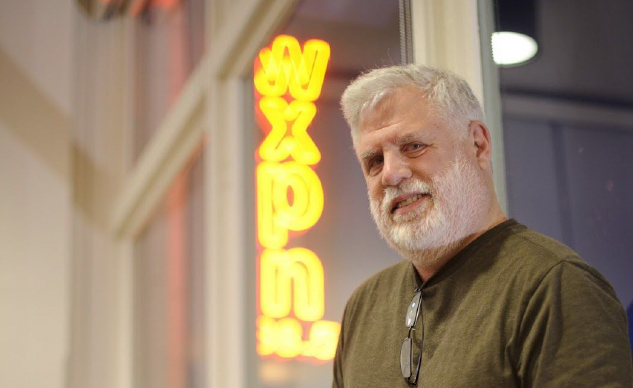 After 25 years at the World Cafe, David Dye’s role is changing

After a quarter century at the helm of NPR’s World Cafe, David Dye announced today that he is stepping down on March 31st, 2017, as the full time host and producer of the show. He’ll continue hosting WXPN’s weekly Funky Friday show and will have a continued role on World Cafe as a special contributor.

“On one hand, it is extremely hard to picture my life without hosting the World Cafe on a daily basis,” says Dye. “It is the best job in radio, working with the most talented people. For years I have had the opportunity to sit in the same room talking with the likes of Leonard Cohen, Joni Mitchell, Herbie Hancock and thousands of others. Our 25th anniversary seems like the perfect juncture to get off the treadmill of daily radio and see what is next.”

Dye’s voice has been a fixture on Philadelphia radio for over four decades. He began his broadcasting career in 1970 at WMMR, where he was an early champion of Bruce Springsteen, earning a shout-out from The Boss in a chapter of his newly published memoir Born to Run titled “A Deejay Saved My Life.”

After a four year run at ‘MMR, David combined his dream of being a DJ with his interest in the rural life and moved to Maine, where he continued to program and DJ. Dye returned to Philadelphia in 1981 where he worked briefly at WHYY before joining the on-air staff at WIOQ, along with XPN’s Helen Leicht. At ‘IOQ he became one of Philly’s most beloved DJs, and began his career as Mr. Friday Night on “The Friday Flashback,” a wildly popular weekly live dance party. His first stint at WXPN came in 1989 when he began hosting Sleepy Hollow, and became host and producer of World Cafe when it launched in 1991.

With music discovery as its goal, World Cafe showcases heritage and emerging artists, and focuses on in-studio sessions and interviews with musicians. Over the years, the show has profiled countless luminaries of rock, roots, soul and more, championing up-and-coming artists as their careers blossom while highlighting the continuing work of heritage artists. To date, the show produced 40 Live at the World Cafe compilation albums, has been carried on more than 200 stations nationwide, and David has interviewed thousands of artists.

World Cafe will continue to grow and evolve with Dye’s departure; contributing host Talia Schlanger recently joined the team, and a Nashville bureau for the Cafe was launched as well.

And on March 3 and March 4 at World Cafe Live, Dye will be honored with two celebratory concerts to mark World Cafe‘s 25th anniversary.

About David’s changing role, Anya Grundmann, NPR’s Vice President for Programming and Audience Development says: “Across hundreds of public radio stations, David has become a beloved national guide to great music and the creative artists who power our culture. He has built an important platform for music that will continue to benefit from his original and abiding vision.”

XPN General Manager Roger LaMay says: “It’s impossible to measure the impact that David Dye has had on artists and audiences with World Café. The show’s tremendous success and high acclaim is due mainly to his efforts. We look forward to honoring him with some one-of-a-kind musical tributes and by making sure that his program has a long future of national musical discovery.”