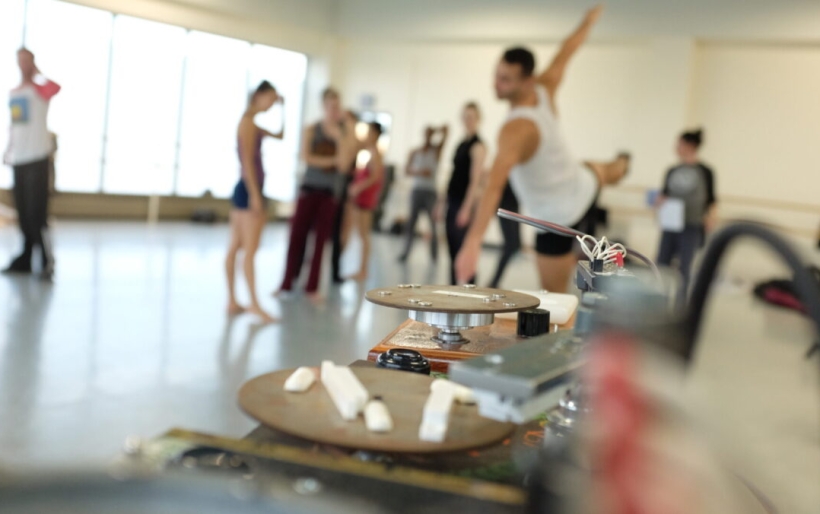 BalletX dancers rehearse for Sunset, 0639 Hours at the Rock School | photo by John Vettese for WXPN

“Do you realize it took us an hour and a half to break down?”

Joshua Machiz asks this of his fellow Philadelphia musicians Isaac Stanford, Andrew Mars and Rosie Langabeer as they walk down a hallway at South Philly’s Rock School for Dance Education. They’d just packed away the last of their gear – several curious contraptions of spinning metal circuits and intertwining cables home-fashioned by Baltimore experimental artist Neil Feather, along with three prepared speakers the instruments were connected to. These are normal speakers that have been augmented with various objects to alter their sound, making them more resonant, or maybe more percussive.

“A speaker cone vibrates, and when you put things in there, they rattle,” explains Langabeer. “Or if you put a big drum overhead, it changes the tone. So we’ve experimented with different ones, found combinations we like.”

They all have different names, too, like Trampy and Ping Pong. Or Mr. Coffee, which actually has a can sitting and pinging from atop the middle of the speaker.

“This is definitely the skilled labor part of being a musician,” says Langabeer.

“Something like fifty inputs into the board,” adds Stanford. “It’s insane.”

“It’s the blessing and the curse of being the most complicated show any of us have ever worked on,” admits Machiz.

The show in question is called Sunset, o639 Hours, the centerpiece of BalletX’s Fall Series, opening tonight and running through Sunday at the Wilma Theater on Broad Street. It is a collaboration between the contemporary ballet company, choreographer Matthew Neenan, and these four musicians, led by Langabeer; together they interpret the true story of Captain Edwin Musick, a pilot charged with the first trans-Pacific airmail flights in 1938, whose plane tragically exploded mid-air before reaching its final destination in New Zealand.

The musicians come from a variety of backgrounds and various degrees of interconnection; Langabeer and Mars occasionally perform together in Settled Arrows; she has also been a contributing member of TJ Kong and the Atomic Bomb, where Machiz plays bass. Machiz and Langabeer met in a Pig Iron Theater Company production of Twelfth Night and worked together on BalletX’s Proliferation of the Imagination in 2011. He and Mars have also collaborated musically, while Mars once performed improvisatory opera – which, yes, that’s a thing – during intermissions at past BalletX shows.

Stanford, the only ringer of the bunch, was brought in to add some South Pacific sounds thanks to his time in local Hawaiian steel guitar outfit Slowy and the Boats. “I came to one rehearsal at your apartment in Fairmount,” he recalls to Langabeer. “You made soup, I think. I had no idea what was going on, I don’t usually do experimental stuff like this. You were like ‘play like you’re underwater’ and I was like ‘what is going on here?’ Next time I came back, you had taken all this stuff recorded that night, and they’d done choreography to it. I didn’t even realize there were dancers were involved.”

This was winter of 2013 into 2014, when this group of players who have long orbited the local performing arts universe converged to develop Sunset for its inaugural production. Neenan, the choreographer, had worked with Langabeer on Proliferation and knew he wanted to pursue a more focused collaboration with her. The idea was developed for the second Philadelphia International Festival for the Arts, originally intended for the Pennsylvania Ballet, but when that didn’t pan out, it was produced for BalletX with a grant from the Knight Foundation.

The theme of PIFA that year was time travel, and it inspired Mars and Langabeer to look to the past. Langabeer had been fascinated with the pre-WWII era in her native New Zealand, and some random Googling led her to the story of Musick.

“There were all these great things about it. Airmail. Flying boats,” reflects Langabeer. “I’d never heard of a flying boat before. My grandfather was a pilot, he flew.”

She continues, “He was also deaf, and always imagined a piece of music that was the sound of plane engines. My other grandfather was a postman in New Zealand. So I started having this personal connection with the older generations of my own family as we got into the history, and the landmarks.”

Once the story was mapped out into ballet scenes, the group began conceptualizing the music – which began with improvisations on Feather’s instruments, particularly the Magnapooter. Soundscapes were built up, dissected, and shaped into a planned score that could be recreated with each performance.

“It’s really arranged, but it has a lot of chaos built in,” says Stanford. “There’s the Magnapooter element, and you never know how exactly they’re going to respond and react.”

For sonic instrumentation, the group looked for inspiration to both pop music of the late 30s, showtunes and Great American Songbook standards, as well as the music of the South Pacific region – Mars refers to it as a jukebox-style score. In addition, the soundtrack is shaped for the Wilma by live engineer Nick Cortitas, a sound designer who also incorporated archival audio from radio broadcasts and sound collages of the dancers reading letters from the era – their voices blending together one atop the other to represent the letters carried in the airmail plane.

The attention to the time period carries over to working with Feather on the instrumentation. “I was drawn to the fact that he’s not digital, he’s using stuff from the era – things that spin, magnets, electrical currents – and I thought we‘d be able to figure out something,” says Langabeer. “He came to early sessions with a bunch of his instruments: the Thumbsnake — we ended up sampling that — the Chopper, the Wiggler.” The names raise a few chuckes around the table, and Langabeer adds “He has one called the Futura. I really wanted to put it on the show at end of act one, it would totally work in a transition at that point. But we have so much stuff already…and it’s another instrument, it’s got about 20 speakers, they all have to be prepared. We had to ask ‘what are the essential things, what are the things we can play onstage without being totally afraid of not being able to manage them?’”

The score was then presented to the dancers in a handful of initial run-throughs, who choreographed the show to a live recording from that day. Interestingly, where the dancers look to the music for cues, it works the other way around too.

“They became our score,” describes Langabeer. “We gave them a score, they learn it, and then we use their moves for our score.”

“It’s a conversation that happened over two months or so,” adds Machiz. Part of Mars’ role in the show was vocals and lyrics, though his lyrics are abstract. Since the dancers tell the story so literally, he says, it might have been too heavy-handed if his lyrics had also been a literal narrative.

“Usually, when you have vocal-based music in a dance piece, it’s not lyrical, or it’s a choral piece in Latin,” he says. “It felt like new territory for me, maybe because I’m new to this genre. But it was exciting – how can you put specific content to music that’s not going to outweigh the action of the dance, while also telling the story?”

“The time period we are in right now feels similar to the time period in the story,” Mars reflects. “Right before wartime, this moment of strangeness. Maybe we are always at war, maybe we’re never at war, I don’t know. But I started to see a lot of correlations. For me it adds a resonance, so it’s specific, even though it’s abstract.”

But this isn’t a performance about war. With one exception, there are no explosions. Mars says a lot of the ballet takes place in the downtime of Captain Musick and his crew.

“We tried to imagine scenarios where they’re relaxing,” he says. “And we did that intentionally to show how the precious moments we have in life happen at these times. They’re not grandiose or heroic. They’re human, temporary and simple.”

Sunset, o639 Hours opens tonight and runs through Sunday, November 20th, at the Wilma Theater; tickets and more information can be found at BalletX’s website.