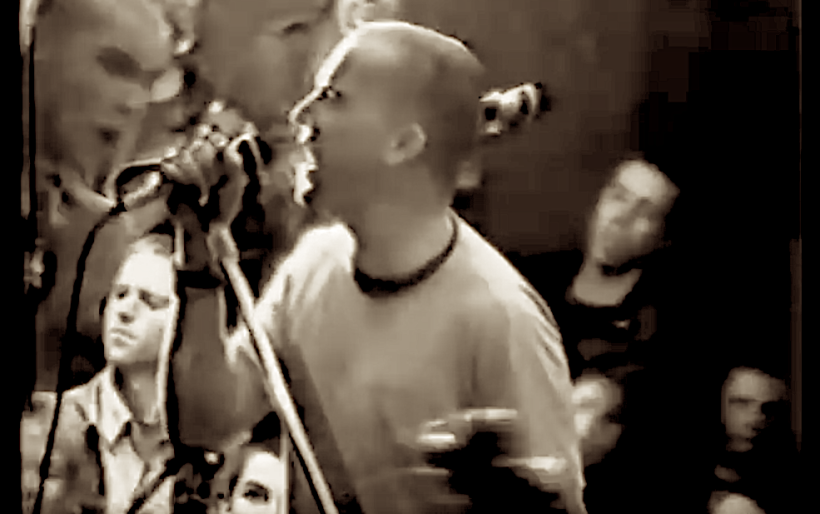 I’ve been listening to a lot of punk lately. I mean, I listen to a fair amount of punk in general, but it’s felt especially apt in light of the general malaise that’s circulated in my circle of acquaintances, friends and family since November 9th or so. As with music in general, punk can fill any number of roles in our lives — at its most basic level, it can be a means of channeling aggression and discontent into sonic catharsis. But the best punk serves as a vehicle for education and inspiration. Few bands embodied this more than short-lived, wildly influential D.C. heroes Minor Threat, and 34 years ago today, they played a local show at Buff Hall in Camden, NJ.

Fronted by the charismatic Ian MacKaye — who went on to lead another influential crew, Fugazi — Minor Threat is known at the most basic level for introducing the drug-free self-care ethos of straight edge to music world, and for being trailblazers of DIY. They were also stridently socially conscious, an amped-up take on protest music of a previous generation. These were songs not of acoustic guitars and minor key chorales but blast beats, raw riffs and howled hooks. The concerns were not dissimilar, though: calls for justice, calls for unity.

Interestingly, this gig in particular was aimed at unity itself. As much as they sometimes come across like loud mouthpieces above the fray, punks are people just like everybody else. Punks in-fight and disagree. As organizer Roland Thatcher told the Philadelphia Weekly in 2012, “On the east coast at the time, there were tensions between some city’s scenes. So we thought, ‘Why not book a D.C. band, a Boston band, a New York band and get two local Philly bands just to get everyone together?'”

The lineup was Minor Threat, S.S. Decontrol from Boston, Agnostic Front from New York, and Philly’s Crib Death and the legendary F.O.D. The show was organized by the local B.Y.O. — aka Better Youth Organization, the punk concept of “for the kids, by the kids” all-ages shows that, as music writer Tony Rettman put it in the Weekly, are “free of clueless bouncers and sleazy promoters.”

In a full interview about the show that Rettman published online, MacKaye recalls being uncertain about the gig upon arrival: “We don’t know anything about Camden. We saw it was right over the river from Philadelphia, so we assumed it was like a suburb of Philly or something; we didn’t know! I don’t know what Camden is like today, but it was really, really, really sketchy. Really frightening.”

After setting up and waiting outside for SSD to soundcheck, MacKaye told Rettman he was injured when a speeding car crashed into Minor Threat’s van. He went to the hospital, was treated for a broken toe, a busted calf and a bleeding knot on his head that was “the size of a grapefruit.”

“I remember being in the hospital saying ‘We gotta play!’ because I was there to represent,” he told Rettman. “We came all the way up there to play.”

MacKaye returned to Buff Hall, and played the show, which you can watch in its entirety below. He tells Rettman that his performance was off his usual mark, but watching it, MacKaye and Minor Threat nonetheless appear full of energy and intensity — despite somebody in the crowd heckling between numerous songs that it was their birthday. (Even the most forward-thinking punk communities are not immune from this nonsense, evidently: Minor Threat humors them and breaks into “Happy Birthday” at one point.)

As MacKaye said in summary to Rettman: “That show was a very legendary show as it was this meeting of the tribes. It was a definite throwdown where everybody tried to top themselves. It was a very long night. I remember passing out on the way back. I was seriously injured. I couldn’t get out of bed that next morning.

“The first time we went up to Philly was for a Black Flag show in Kensington that ended up in this huge riot. Then second time I went there, I got hit by a car. So when we came into Philly the third time to play Love Hall, I was like ‘What’s going to happen this time?’ But it ended up being a great show. That was when we were back to a four piece and we were lean and mean; firing on all cylinders.”

Thatcher had this to say, in a scene report for Maximumrocknroll: “It seems like a consensus that this gig was a true uplift. The punks from the four cities got along fine, as well as punks from Albany, North Jersey, and other regional scenes. This marked a turning point towards a new, forward beginning. Stay tuned–we’ll keep you posted.”

Watch video of SSD’s set from the same show below. Were you there? Holy crap I’m jealous. Wherever you might be in life today, let this music point your Sunday in a positive direction.