Remember that time My Morning Jacket played the Electric Factory and it was broadcast on XPN?
Recordings

Remember that time My Morning Jacket played the Electric Factory and it was broadcast on XPN?

I remember the night vividly. It was a chilly Philadelphia night in December of 2006, back when December nights used to be chilly. It was my first My Morning Jacket show. It was one of my first shows as a volunteer for WXPN, and the entire gig was broadcast live on the air. It went crazy late, and none of us minded.

The garage pop two-piece The Slip opened; they had a great single from their record Eisenhower circulating the airwaves called “Children of December” and, being a Sag-Cap myself, I dug hearing it played live just a few weeks out from my birthday. The Benevento Russo Duo followed, filling the room with progressive-minded groovescapes.

I remember hovering by the broadcast booth, ready to hand station flyers to passers by. I remember station engineer Jared Styles peeping a printout of the sprawling 20-song setlist, noting “THERE’S A LOT OF ROCK ON THERE.”

The band hit the stage at or around 11. Who goes on that late when they’ve got a 20-song setlist? “It Beats 4 U” gave the show a mellow open, leading into the spectral space rock of “Gideon” and “What A Wonderful Man,” all from the band’s recently released Z, their level-up move from more indie-oriented beginnings. After that kickoff trilogy, the impressionsitic lead guitar lick of “One Big Holiday” entered. People shrieked. The song kicked in. I was a instantly converted into fan-dom, and soaked up the set for the next two hours. Afterwards, I stood out in the plummeted temperatures, handing out XPN swag to attendees exiting the show. It was 1 a.m., and that was totally fine. 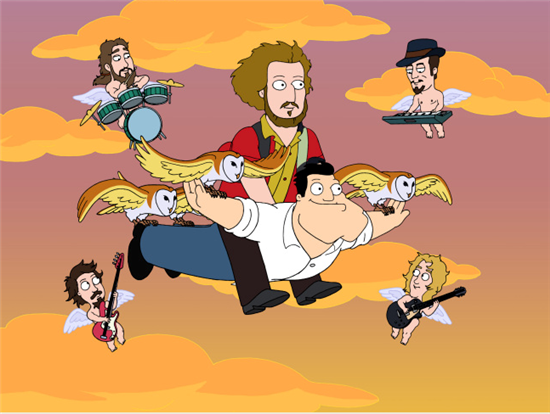 Ten years out from that day, My Morning Jacket continues to galvanize crowds — as does frontman Jim James, who put in a remarkable performance at The Fillmore a couple weekends ago. And thanks to the wonderful Archive.org, we have stumbled across a recording of the entire XPN broadcast, beginning with our friend Jim McGuinn anchoring the show. Listen to it below, and check out the gig poster by Strawberry Luna. Were you at this show? What are your memories of it? Let us know in the comments.

My Morning Jacket at the Electric Factory poster | design by Strawberry Luna | strawberryluna.com