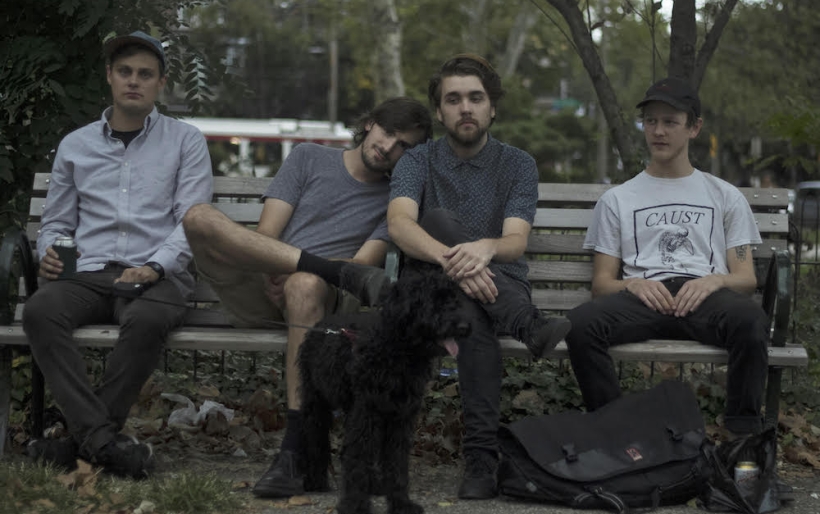 Clique | photo courtesy of the band

Clique is a band that makes itself heard by being the restrained voice in a room full of shouting. On this year’s Burden Piece LP the local four piece built upon the slow-burning-punk foundation that made 2014’s self-titled debut such an instant and recurring favorite, delivering songs that reach out through catchy guitar riffs and pull you in through relatable, introspective lyrics. “Wishful Thinking” is a sub-two minute centerpiece on the Top Shelf Records effort, and today we have the premiere of a video for the track.

Featuring local musician Shannen Moser and filmed by Good Boy Audiovisual (another project of bassist Travis Arterburn), the clip shows the band (Arterburn, guitarist / singers P.J. Carroll and Brandon Shipp, and drummer Tom Anthony) sitting on couches in a dark space, staring into the distance. They each seem individually isolated, though they sing and play together – a fitting visual representation of John Vettese’s observation that “there are many people in the world who struggle with doubt and disaffection, who yearn for connection but prefer to be left alone. And for those people, there’s Clique.”

We’re not in a living room with the band, though, as the sofas and lamps might have you think. If you catch glimpses of the twinkling lights in the background, you might be able to tell that we’re actually sitting in the middle of a park near a highway full of passing cars. From Travis:

I thought of the idea over Thanksgiving weekend. I knew we had to move forward quickly cus it’s getting colder. So, the following Saturday, December 3rd, Ian from Mumblr helped us get half of my living room to a field in Fairmount park with their van. The shoot ran pretty smoothly despite dealing with some drunk teenagers and cops. For some reason the cops let us keep working and didn’t really hassle us. I guess once they realized we weren’t drunk teenagers they just let us be. Who’d have thought?

Clique have a few shows lined up over the next several weeks, including December 15th at Everybody Hits, December 29th at The Pharmacy, and January 26th at Johnny Brenda’s. Watch “Wishful Thinking” below. Listen back to their Key Studio Session here.