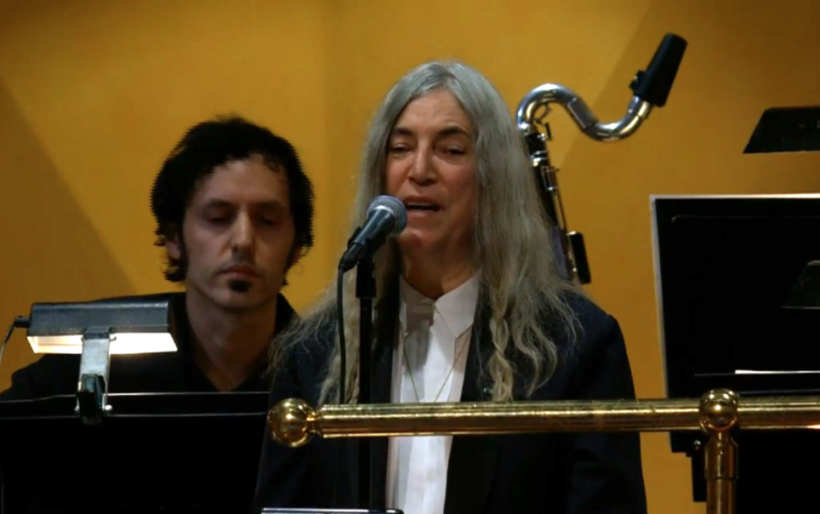 Patti Smith at the Nobel Prize ceremony | still from video

This year, singer-songwriter icon Bob Dylan won the Nobel Prize for Literature — and it was an unconventional feat in a number of ways. It was the first time the Nobel committee has honored a musician as a writer. There was also the way in which Dylan, under widespread media scrutiny, took a week to publicly acknowledge his win. And the fact that he did not attend today’s awards ceremony in Stockholm to claim his award.

In his place, another singer-songwriter icon — Patti Smith — attended the ceremony and performed Dylan’s classic “A Hard Rain’s A-Gonna Fall” from 1963’s The Freewheelin’ Bob Dylan. You can watch her performance of the song here, and watch the remarks about Dylan by Prof. Horace Engdahl of the Swedish Academy here.

Engdahl told the audience that the win was not that unconventional, since poetry has historically been recited in a musical or melodic manner.

“What Bob Dylan did was not to return to the grid, or the provincials. Instead, he dedicated himself, body and soul, to 20th century American popular music.” said Engdahl. “The kind played on the radio station or gramophone records for ordinary people, white and black. Protest songs, country, blues, rock, gospel, mainstream music. He listened day and night, testing stuff on his instruments, trying to learn.”