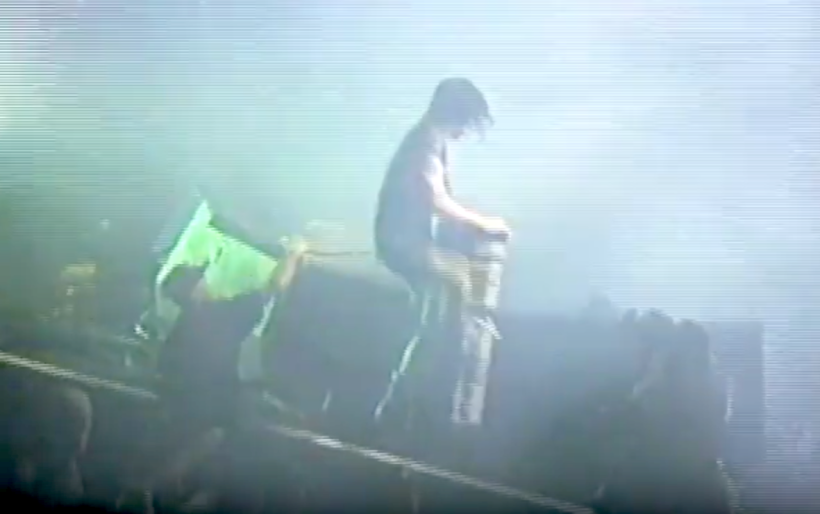 Nine Inch Nails at The Spectrum | still from video

Mr. Self Destruct: Watch Nine Inch Nails rage at The Spectrum on December 11, 1994

Don’t let anybody tell you the 90s weren’t an era of excess. Case in point: industrial rock dieties Nine Inch Nails spent a solid five minutes onstage knocking over and beating up synthesizer keyboards when their Self Destruct Tour came to The Spectrum on December 11th, 1994. Synths, as any instrument retailer will tell you, are not cheap. And yet in this video from the show, you can cue up to about the 34 minute mark during an extended jam on “Happiness In Slavery” and watch Trent Reznor and his motley crew knock around, punch and topple at least a half dozen of them stationed around stage.

For sure, that seems like an unnecessary amount of synths for this live show given how much of it (probably, even in this era) was digitally sequenced. Maybe some of these were older models that were used as props to facilitate NIN’s instrumental nihilism. But the rampage rolls to the 39:16 point, when Reznor lifted one synth like he was Paul Simonon on the cover of London Calling, smashed it on the stage, took it to the front, propped it on its end and kicked the keys off one by one.

There was more to this 100-minute show than instrument destruction, of course. But for fifteen year old me, seated somewhere in the lower mez level and watching aghast, this was a big takeaway. It was my first concert, and I was as enthralled as I was utterly terrified. (This was accelerated, no doubt, by openers Jim Rose Circus Sideshow, not to mention Marilyn Manson storming out onstage to lyrics “I am the god of fuck” and passing off “jokes” about child abuse as banter.)

It was also NIN at the peak of its two-year run in support of The Downward Spiral — their famous, mud-caked appearance at Woodstock ’94 had catapulted them to a new level of renown, so much so that the tour moved from theaters to stadiums. The scale of the show was such that the trilogy of “Eraser,” “Hurt” and “The Downward Spiral” were played behind projected black and white film footage juxtaposing beauty and decay (later repurposed in the “Hurt” video on MTV). Reznor had room to dig deep in the NIN catalog for covers (Joy Division’s “Dead Souls” from The Crow Soundtrack, Pigface’s “Suck,” a bonus track on Broken) and deep cuts like Pretty Hate Machine‘s “The Only Time.”

In all, it was a tremendous show — and for this writer, an incredible introduction to the mad world of live music. Per their tour schedule on setlist.fm, this was NIN’s last gig before a two-and-a-half week break, and they clearly went all out. Take it in below, care of Philly’s constant videographer Markit Aneight.