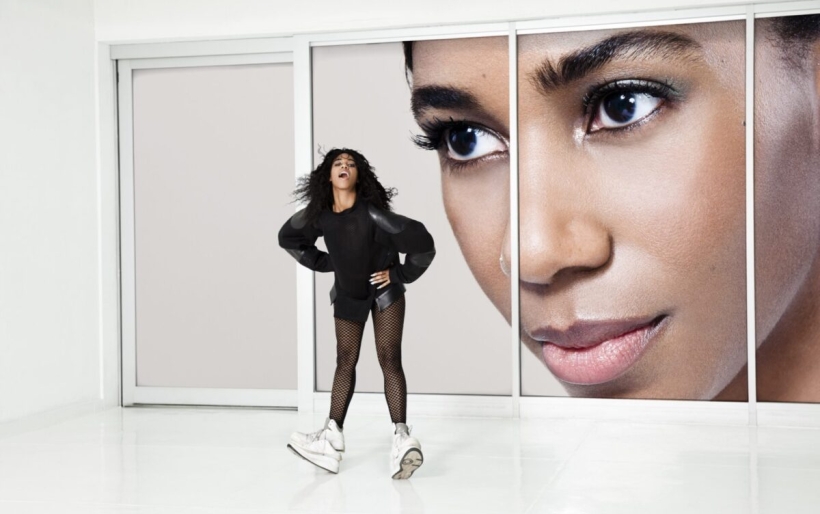 Santigold | Photo by Christelle de Castro | courtesy of the artist

Year-End Mania is the Key’s annual survey of the things below the surface that made 2016 incredible. Today, our Chad Snyder takes a look at some of the most eye-catching promo photos from Philly artists we’ve seen this year..

For a lot of people, a musician’s image is just about as important as the music itself. The release of a new album usually signals a deluge of photos, videos, and artwork, providing context to the themes and sounds the project explores. It’s a visual side dish to the aural main course, and one of the required components to this feast is usually a new portrait of the artist. Usually, they’re just simple shots of cool people looking cool, but sometimes, the photos transcend mere documentation and stand on their own. Take the photo of Spill above, which actually features members of the band spilling champagne on each other (classic). Since I’ve started writing for The Key, I’ve seen a lot of promotional photos from Philly artists, but here are just a few that stood out from the pack. Where Spill’s photo was maybe a little too on-the-nose, this portrait of Mannequin Pussy manages to strike a perfect balance between thematic and subtle. If you knew nothing about the band and saw this shot before the release of their new album Romantic, you’d probably expect it to be a cuddly, heartfelt affair. You’d be dead wrong, of course, as it’s actually a bracing slap in the face, but that’s what makes the record (and this portrait) so engaging in the first place. Sad13 | photo by Shervin Lainez | photo courtesy of the artist

This year, Sadie Dupuis from Speedy Ortiz successfully rebranded herself as a pop artist with Slugger, her debut under the Sad13 moniker. Combining vibrant, bubblegum textures with confrontational, feminist rhetoric, she struck a fantastic balance between dance pop and social discourse, and that dialogue carries over into her image. Here, she almost resembles a human Barbie doll as she stares directly into the camera, challenging the male gaze to open its dumb, problematic mouth and find something wrong with what she’s doing. Keep on keepin’ on, Sad13. Pinkwash |photo by Amy June Breesman | courtesy of the artist
Maybe it’s the unsettling, implied nudity, maybe it’s Ashely Arnwine’s intimidating stare, maybe it’s just how perfect both of their eyebrows are. Whatever it is, I have trouble looking away from this black and white shot of Pinkwash. If my ears had eyes, they’d have just as much trouble looking away from their full length-debut. Collective Sigh, whichcame out on Don Giovanni reords last May. Check out a full interview with the band here. Then, watch the vibrant, glitchy video for “Gumdrop” here. 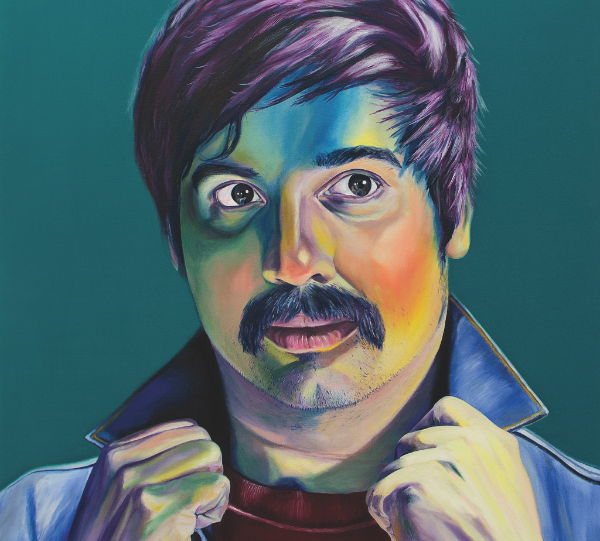 Honus Honus | portrait by Mustafa Shaheen | courtesy of the artist
Anyone who doesn’t think Honus Honus is the man (man) can fight me right now. Put down whatever you’re doing, climb through your laptop/phone screen, and talk smack on Honus Honus to my face–I dare you. His debut solo record, Use Your Delusion, dropped this fall, and it’s just as quirky and colorful as the arresting portrait you see above. Disagree? Well, then meet me on the playground after school and find out what two years of studying American Kenpo in a Methodist Church does to someone. Laser Background | Photo by Natalie Piserchio | courtesy of the artist

Is Laser Backgroud’s Andy Molholt standing underwater? Then why do his clothes look so dry? Furthermore, how is standing upright like that? Is he wearing concrete shoes, or–ANDY! Watch out for that shark! Look guys, I get it; this picture was taken in an aquarium. That doesn’t keep it from being cool as hell, though, just like his latest record, Correct. Similar to this image, it’s a psychedelic, aquatic affair, and you can hear Molholt and his band play selections from it live in their Key Studio Session. Santigold | Photo by Christelle de Castro | courtesy of the artist
Philly-native Santigold strikes a dynamic pose in a sterile, white penthouse, while a Godzilla-sized Santigold silently judges her in the window. That sentence sounds like nonsense when I read it back, but it’s exactly what’s happening in the image above. I’m not sure what this portrait is trying to say to me, but I do know that I love it. Same goes for her latest, “Can’t Get Enough Of Myself” featuring album 99¢. Carroll | photo by Noah Silvestry | courtesy of the artist

Just last month, Carroll released one of my favorite records of the year, As Far As Gardens Go. When it first dropped, I eloquently described the songs as existing in a primary color world. If that world really existed, maybe the image above is what it would look like–deep blues, soft yellows, and weird, red flower petals floating in the air wherever you go. If you want to see more of Noah Silvestry working his camera magic on the band, check out his recent photo essay from the Carroll’s album release at The Barbary. Cherry | courtesy of the artist

Another unsettling black-and-white portrait, this time of Cherry’s Russell Edling. It’s got a creepy, dilapidated concrete background, Edling making Dracula eyes at the camera, and that weird, crooked mouth photo on a stick. What’s behind that mouth, Edling? A different mouth? Likely story. Regardless, his Lame-O Records debut, Gloom, dropped earlier this year, and it’s inviting, earworm melodies almost made me stop wondering what he’s hiding from me. Almost. Michelle Zauner created a dreamy, kaleidoscopic world on Japanese Breakfast’s latest, Psychopomp, and in this beautiful promo photo for the album, she sits in one. Seriously, this image is so vibrant that it ruined normal colors for me. Yesterday, my friend showed me some pictures of the Grand Canyon from his vacation, and I was like, “Meh, it’s just a bunch of boring, gray rocks.” That’s how beautiful this image is. It’s been a dream of mine since I was a kid to gaze upon the gorgeous blues of Niagara Falls, but now, who cares? Thanks, Japanese Breakfast. Pissed Jeans | photo by Ebru Yildiz | courtesy of the artist
Finally, we have the new promo shot from Pissed Jeans. When I first saw this one, I thought it was a mistake; then, I laughed out loud. The snark factor of this portrait is off the charts, especially since it’s barely even a portrait. They could have chosen any of the multitude of shots Ebru Yildiz likely took, but instead, they went for the one where they’re barely visible behind the old lady in the sedan. Genius. Their new album, Why Love Now? is out February 24th, and if it’s as pummeling as this photo is hilarious, hardcore punks fans are in for a real treat.