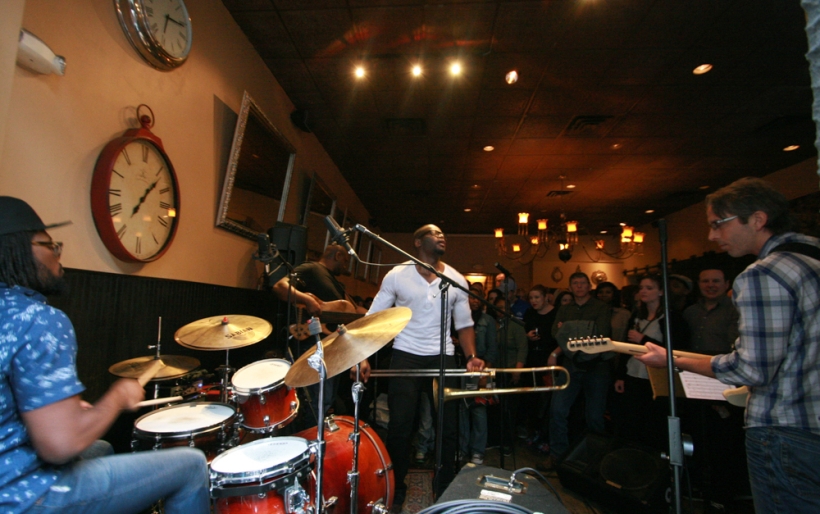 Year-End Mania is the Key’s annual survey of the things below the surface that made 2016 incredible. Today, Philly trombonist and Center City Jazz Festival founder Ernest Stuart shares his favorite releases and rediscoveries. He rings in New Year’s Eve at TIME Restaurant from 10 p.m. to 2 a.m., more information on the show can be found here.

Musically speaking, growing up wasn’t easy for me. My mother was particularly religious, and limited my musical exploration to: 1) Gospel, 2) Contemporary Christian Music, and 3) More Gospel. The only time I was exposed to different genres was when I spent weekends with my dad (think Motown classics & ’70s Funk) and on my daily school bus rides (think late ‘90s-early’00s hip-hop and R&B), where I would pretend to know the words to every BadBoy hit.

Now in my 30’s and armed with streaming service subscriptions, my appetite for new music is voracious. I try to keep an open mind and am often on the search for old music that “somehow” eluded me during my youth, new releases from both freshmen and established artists, and everything in-between. Below are my Top Five favorite old finds and new releases of 2016.

Nx Worries was actually a Spotify recommendation for me. I largely ignore such Spotify features, but I was curious. I quickly realized Anderson .Paak. is the featured vocalist, which meant I had to listen to it at least 10 times.

This is the first new jazz album I have fallen in love with in a long time. Theo presented a great concept that works extremely well in a studio setting, using it to its fullest.

MXXWLL is a magical Australian man. (That is all.)

Wow… I wasn’t expecting Detroit ‘70s-era funk. I thought the production quality was great on his previous album, Because the Internet, but this is an even better treat. I’m very impressed by this album.

I am surprised I don’t hear as many people talking about POLIÇA as I would hope. They have their own thing — very (awesomely) affected vocals and production that features a great mix of synths and live instruments. More people should be listening to them.

The Truth of What I Am >The Narcissist – George Burton

The Life of Pablo – Kanye West

It’s rare to find an old live recording that sounds this great. During the recording, the Jimi Hendrix Experience sounds great. It amazes me how much sound these three people were able to produce.

Years ago, I used to hear Luke Carlos O’Reilly’s band perform the song Jan Jan every Monday at Marmont in Old City. I never know whose song it was until recently, when it came on at a bar, and I Shazamed the hell out if it. I quickly fell in love with the whole album.

I used to hear bits and pieces of this album when I was younger, a time when Philly had very cool lounges with DJs spinning great music in them. I stumbled upon this album this year while digging deeper into Dilla’s repertoire (he’s one of nine producers listed on this album). This album reveals Slum Village at their finest.

I put this album on almost every time I have dinner guests. It’s old-school, minimal samba. I love Jorge Ben Jor’s voice.

Due to the limitations of school-bus-radio, I never realized the melody for SWV’s “Rain Down” was unoriginal. Meaning, it was actually taken… errr, “borrowed” from the Jaco Pastorius’ song Portrait of Tracy, which is the absolute highlight of his self-titled album.