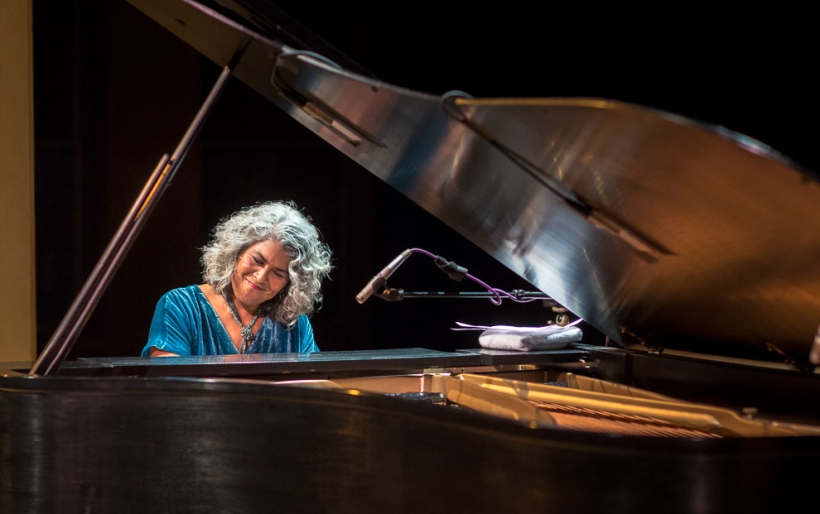 Sure, a calendar year is just an arbitrarily designated indicator spanning a single trip around the sun, but 2016 nonetheless felt like a series of kicks to the gut with evil intent. Even the holiday season, which should have been a time for putting political rancor to (at least temporary) rest, enjoying friends, family and food, and recalibrating for the next orbit, pulled the rug out with the mother-daughter departure of Carrie Fisher and Debbie Reynolds. Good riddance, 2016.

Now, if music is indeed, as the late great Albert Ayler would have it, the healing force of the universe, the sounds of 2017 carry a pretty heavy burden on their shoulders. January’s local jazz offerings provide several occasions to celebrate the congregating of like-minded artists to heal, create, and hopefully make a fresh start.

South is all about friends and family this month. On Thursday, January 5th, bassist Gerald Veasley will host a reunion of local friends including percussionist Doc Gibbs, guitarist Monette Sudler, violinist Diane Monroe and flutist Leslie Burrs. That will be followed on Friday and Saturday by a two-night run by The Norths, led by the husband-and-wife duo of local faves Meg Clifton North (vocals) and Victor North (sax). Later in the month, on the 18th, always in-demand bassist Mike Boone will take a rare turn in the spotlight, sharing it with his talented 10-year-old son Mekhi on drums. More information at South’s calendar.

Philly-born organ master Joey DeFrancesco takes a stand against the negativity on his new album, Project Freedom, highlighted by covers of John Lennon’s “Imagine” and Black National Anthem “Lift Every Voice and Sing.” Joey D’s populist intentions are evident in the name of his new band, The People, which features the versatile line-up of saxophonist Troy Roberts, guitarist Dan Wilson and drummer Jason Brown. He’ll bring that band to Chris’ Jazz Café on Friday January 13 and Saturday the 14th, no doubt providing a Philly-soul tonic for the contentious season just passed. More information here.

No musical setting is more intimate than the duo, and that intimacy is only amplified when the conversation between two musicians takes place in a private home. Since last summer, Matt Yaple has opened his Kensington pad – a former garage transformed into a modern open-plan space straight off the pages of an interior design magazine – into an invitation-only (though an email address is all that’s needed for an invite) performance space with his @exuberance series, which he hopes advances the spirit of the music to his guests. He’ll kick off 2017 the same way he launched the series last summer, with pianist, Philly native and longtime friend Sumi Tonooka. She’ll be joined on Monday, January 16 by guitar great Russell Malone, whose collaborations have included the legendary organist Jimmy Smith, Harry Connick Jr. and Diana Krall. More information here.

Guitarist Pat Metheny has been focusing on his Unity Group over the past several years, but his next visit to Philly on January 21 will be with a new quartet made up of old and new collaborators. On the drums, as he has been for nearly 20 years now, will be Antonio Sanchez. The longtime guitar-drums tandem will be joined for the first time in the configuration by bassist Linda Oh, a rising star who works regularly with Dave Douglas, and pianist Gwilyn Simcock – the first time Metheny has crossed paths with the 88s since his co-led project with Brad Mehldau a decade ago, and, significantly, the first time he’s invited a keyboardist into one of his bands since foundational collaborator Lyle Mays. A new beginning for an innovator whose fresh paths are always worth following. More information on the show can be found here.