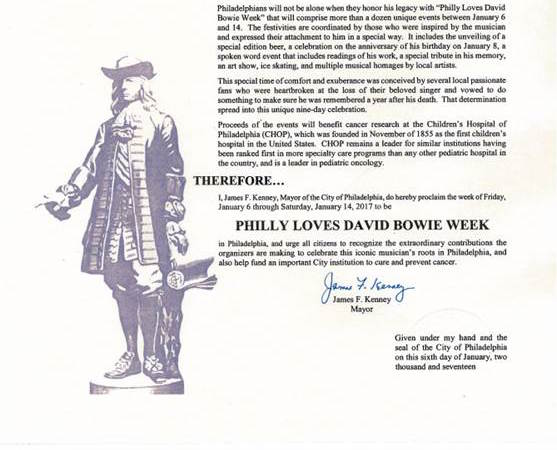 This fall and winter, I’ve been busy organizing and coordinating a week-long celebration around David Bowie, both the man and the music … As it stands we have over a dozen events beginning tomorrow and ending next Saturday, January 14. You can learn more about #PhillyBowieWeek at our website, PhillyLovesBowie.com. This morning, Philadelphia Mayor Jim Kenney just issued a proclamation officially declaring January 6-14 PHILLY LOVES DAVID BOWIE WEEK! You can see the proclamation above, and read the text below.

The City of Philadelphia is a music hub and source of professional inspiration for remarkable entertainers who have made a lasting impact on multiple generations worldwide.

The City was an integral part in the legendary career of David Bowie who performed many sold out shows that delighted Philadelphians over the past few decades. He recorded his album “Young Americans” at the iconic Sigma Sound Studios on 12th Street in August 1974. He also recorded three LPs – “David Live,” “Young Americans,” and “Stage” – in Philadelphia as well as filmed the music video for the 1983 hit single “Modern Love.” In total, his works include 27 studio albums, 9 live albums, 49 compilation albums, 6 extended plays, and 121 singles. He is estimated to have sold over 140 million records during his unparalleled lifetime career.
In 1973, Bowie published the song “My Death” in which he wrote about his supposedly impending demise – But whatever lies behind the door/There is nothing much to do/Angel or devil, I don’t care/For in front of that door there is you. His fans felt that same level of connection to him.

Bowie’s intense passion was about sharing love with others and encouraging them to spread their generosity. His untimely death from cancer on January 10, 2016 stunned his many fans around the world who were devastated by the tragic news. But as the musician wrote in the 1972 song “Rock’n’Roll Suicide,” Just turn on with me and you’re not alone.

Philadelphians will not be alone when they honor his legacy with “Philly Loves David Bowie Week” that will comprise more than a dozen unique events between January 6 and 14. The festivities are coordinated by those who were inspired by the musician and expressed their attachment to him in a special way. It includes the unveiling of a special edition beer, a celebration on the anniversary of his birthday on January 8, a spoken word event that includes readings of his work, a special tribute in his memory, an art show, ice skating, and multiple musical homages by local artists.

This special time of comfort and exuberance was conceived by several local passionate fans who were heartbroken at the loss of their beloved singer and vowed to do something to make sure he was remembered a year after his death. That determination spread into this unique nine-day celebration.

Proceeds of the events will benefit cancer research at the Children’s Hospital of Philadelphia (CHOP), which was founded in November of 1855 as the first children’s hospital in the United States. CHOP remains a leader for similar institutions having been ranked first in more specialty care programs than any other pediatric hospital in the country, and is a leader in pediatric oncology.

I, James F. Kenney, Mayor of the City of Philadelphia, do hereby proclaim the week of Friday, January 6 through Saturday, January 14, 2017 to be