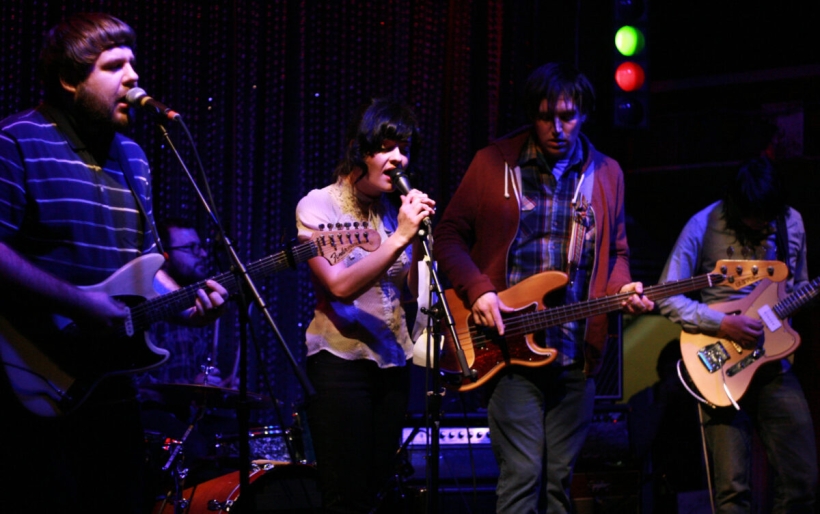 Listen to a long lost Pet Milk song, “Ostalgia,” see them at Everybody Hits on 1/28

Philly indie-pop outfit Pet Milk hasn’t played a show together since 2013. Not out of any ill will or anything — they’re all still good friends — but more because everybody is busy in their own ways. Guitarist and singer Herb Shellenberger spent a couple years studying in London and has become a noted cinema scholar; singer Sarah Schimeneck now fronts Mercury Girls, and bassist Adam Herndon continues to play in A Sunny Day in Glasgow.

The band was in the midst of recording its full-length debut when it dissolved, and while I’m not 100% that the above photo (opening for Bleeding Rainbow at Johnny Brenda’s on Valentine’s Day of 2013) is its final show, it was certainly one of the last. A demo was dug up last year with allusions to a possible future, and it seems that future is upon us.

With everybody back in Philly for an extended time for the first time in forever, Pet Milk decided to regroup for a show — they’ll be at Everybody Hits on Saturday, January 28th with Callowhill and Green Wolf, the new project of Pet Milk drummer Josh Agran. To mark the occasion, the band also uncovered “Ostalgia,” a song from its 2012-13 LP sessions draped in twee / c86 melancholic nostalgia with a haunting synthesizer lead. From Bandcamp:

ostalgie: a term that emerged in the 1990s to describe a sense of longing and nostalgia for the era before the collapse of the Communist Bloc

Sounds about right. Listen to the song below; more information on the gig can be found on Facebook.