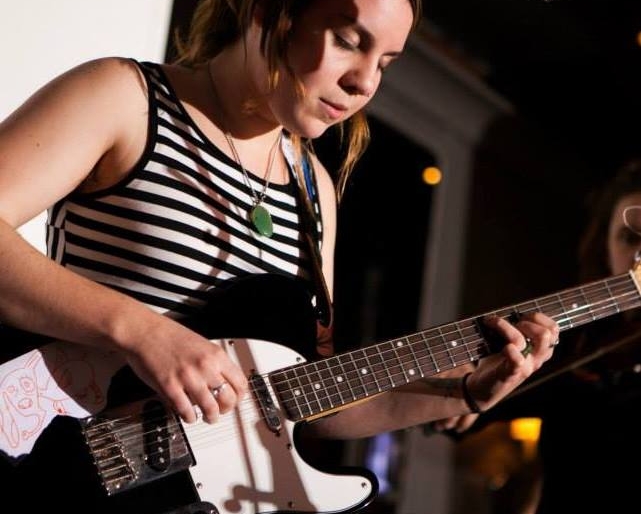 When Ellen Tiberio-Shultz started using the name Ellen Siberian Tiger, she was 15 years old and primarily a solo acoustic performer.

“While I felt certain that writing songs and playing the guitar was something I wanted and needed to do, making acoustic music was never my goal,” she says via email. “The rock band scene in my hometown was dominated by men older than me. I never felt welcomed to jam sessions or entirely accepted at shows. Playing the electric guitar was always what I wanted to do, but doing so felt exposed and dangerous when no other women around me were doing it.”

Eventually, she overcame this fear. She majored in guitar at Berklee College of Music and released an album with a full band where she played lead. “In my teenage years, I desperately wanted to avoid being pigeon holed as another ‘singer/songwriter’ girl with an acoustic guitar,” she says. “And while I am happy that my drive to express myself more accurately has lead me to making the music I do now with my band, I feel sad that I fought so hard to bury the singer/songwriter part of myself.”

Hence the new Red Blooded Woman EP, which we are happy to premiere for you today on The Key. It is a return to the acoustic roots of Tiberio-Shultz’s teenage years, with deft fingerpicking and classic melodic structures — a bit bluesy, a bit folk, a lot awesome. Lyrics channel nervousness, fear and tension, personal uneasiness into plaintive contemplations She says the EP is her way of acknowledging the type of playing that got her started in the first place before the next Ellen Siberian Tiger record makes its way into the world.

Listen to Red Blooded Womanbelow, and see the band play live next Thursday, February 9th, at Ortlieb’s; tickets and more information on the 21+ show can be found at the XPN Concert Calendar.