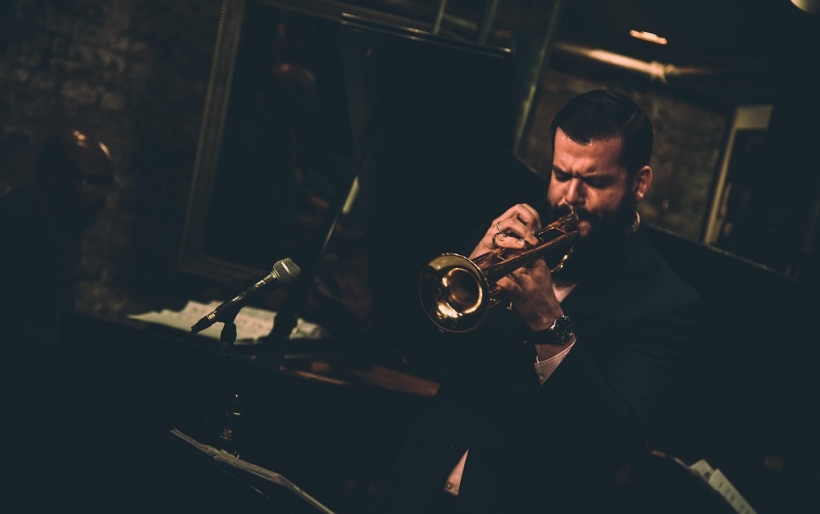 In some ways, Josh Lawrence’s new album Color Theory serves as a farewell to Philadelphia. At the same time that the trumpet player was in the studio last summer, he was making arrangements to move to New York City, that essential proving ground for rising stars in the jazz world.

At the same time, the album, which Lawrence will celebrate this weekend at South, shows off the simmering chemistry of a largely Philly-based band and a sound steeped in the raucous, burning hard-bop style so rooted in this city – suggesting that Lawrence may not be so eager to leave his adopted hometown behind.

“I feel rooted here,” Lawrence said over coffee last month at La Colombe, with City Hall looming in the background. “I’ve lived in Philly longer than I’ve lived anywhere else in my life, and people here consider me as being from Philly. This is where I’m rooted musically, too – the record sounds like a Philly record to me.”

Lawrence’s recent move marks his second tenure in New York City. A native of the Pine Barrens town of Cranbury, New Jersey, Lawrence picked up the trumpet at Princeton High School, where he was a classmate of Oscar-winning La La Land director Damien Chazelle – under the tutelage of the domineering teacher who inspired Chazelle’s breakthrough hit Whiplash. He came to Philly to study at the University of the Arts, then spent a few years in Harlem, studying with piano great Barry Harris but otherwise, he says, “flying completely under the radar.”

His now-wife, graphic designer Ola Baldych, suggested that Lawrence visit Poland, where he explored the European jazz scene, played with Ola’s brother, renowned jazz violinist Adam Baldych, and led his own trio. After a year, though, he felt the pull of home. “I missed being around the type of music I like to play, which is only here,” he says.

It was then that he began his most recent tenure in Philly, which turned out to be the most fruitful of his career thus far. He intends to maintain his ties, continuing to trek back regular to teach at UArts and perform – he opened for Antibalas with the Fresh Cut Orchestra at Ardmore Music Hall last month, a night before helping bassist Anthony Tidd celebrate the fifth anniversary of the Kimmel Center’s “Sittin’ In” jam sessions. The FCO recently recorded its third album as well.

Nonetheless, Color Theory serves to close one chapter in Lawrence’s musical and personal life and open another. It’s significant as his first small-band release since he made his debut in 2010 with a pair of free-wheeling trio albums. The tighter construction and multi-hued sound of the new release reflect the time that he’s spent writing and arranging for big bands in the interim – both Orrin Evans’ Captain Black Big Band, with which he’s played since its beginnings at Chris’ Jazz Café in 2009, and the Fresh Cut Orchestra, which he’s co-led with drummer Anwar Marshall and bassist Jason Fraticelli since the 10-piece ensemble was assembled by the Painted Bride in 2012.

Evans and Marshall both join Lawrence for Color Theory, along with keyboardist Adam Faulk, bassist Madison Rast, trombonist Brent White and – the album’s sole non-Philadelphian, though a fellow Captain Black veteran – saxophonist Caleb Curtis. With these pieces in place, Lawrence constructs a program of wide-ranging tunes that reflect the varied palette of colors suggested by the title.

“Writing for those groups made me focus my small group writing,” Lawrence says. “Dealing with just two horns and a piano you can get more creative because you’re hearing all these bigger sounds but you can put them into this smaller space. I made sure that you got the full spectrum of sound as the tunes were going by.”

One reason that the band sounds so taut and muscular is that they had the luxury of working the music out on stage before heading into the studio, a rare luxury in the current-day jazz climate. Lawrence initially tested the concept on a variety of different bands through a series he hosted at Jose Garces’ restaurant Volvér over five months in early 2016. He tasked himself with writing a new color-themed composition for each show – the soulful “Purple” (in honor of Prince), the explosive “RED!,” the melancholy “Yellow,” the bright, Miles Davis-inspired “Green.”

While he doesn’t see sounds as colors in the way that someone who would actually be diagnosed with synesthesia does, Lawrence says that he does strongly associate colors with moods. “Certain sounds evoke certain colors for me. I tried to orchestrate these songs in ways that depicted different colors and the different feeling that each color gives me, but I didn’t want to explain too much. I want people to think about it and make their own associations.”

The Josh Lawrence Quintet performs at South on Friday, March 3rd and Saturday, March 4th. Tickets and information can be found here.