The man who makes the songs, and the songs that make the man: Two nights with The Magnetic Fields at Union Transfer - WXPN | Vinyl At Heart 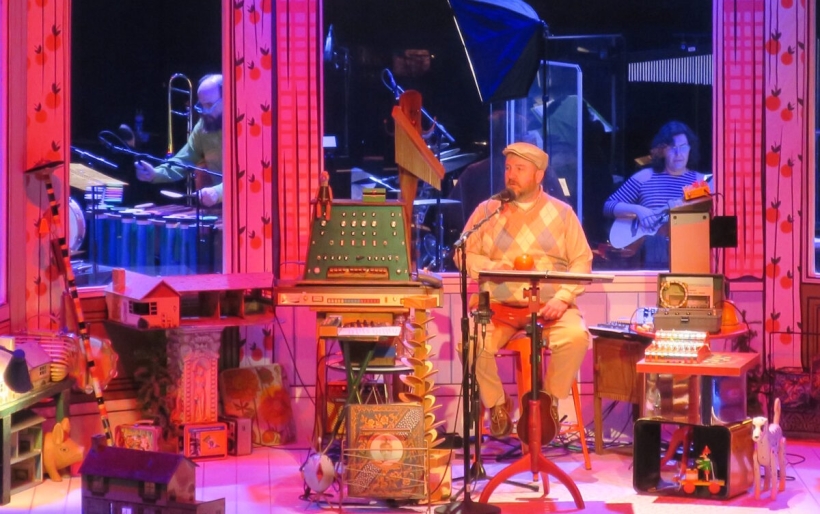 The man who makes the songs, and the songs that make the man: Two nights with The Magnetic Fields at Union Transfer

Stephin Merritt, the ingenious and wholly singular songwriter behind The Magnetic Fields, among other enterprises, calls himself “the least autobiographical person you are likely to meet.”  And yet, he has created his autobiography, of sorts, in 50 Song Memoir: the Fields’ latest, eleventh album as well as a two-part live performance (a concert, but also something slightly other than a concert) that was staged this past Wednesday and Thursday at Union Transfer.  The premise, or gimmick, is winningly simple and perfectly Merrittian: one song for each of the first fifty years of his life – bringing us from 1966 to 2015 – split evenly between the two nights.  The resulting experience was fascinating, complicated, revelatory – for fans, at least – and strangely human. On the morning before the first show, I ran into a friend – a man with whom I once collaborated on a no-holds-barred live karaoke cover performance of the band’s previous multi-disc epic: their beloved, cyclopedic 1999 magnum opus 69 Love Songs – who asked about the new album.  I admitted that the fifty songs had not completely won me over after my first few listens.  But perhaps they would, as they say, open up in concert.  “Right, because that’s how Magnetic Fields songs work,” he snarked.  “You’ve really gotta feel that live energy.”

The joke being that Merritt and his accomplices are not exactly known for their energetic or engaging live shows.  While his songs may be infinitely beguiling objects of delight, the songwriter himself tends to come across as some mixture of curmudgeonly, anti-social, dour, diffident, awkward and/or simply taciturn.  And these shows did little, at least overtly, to upend that expectation.  Merritt’s between-song banter was clearly all pre-scripted, with very few direct addresses to the audience.  (“When musicians address the audience it’s called ‘banter’; when actors address the audience it’s called verfremdungseffekt” he quipped, as that German mouthful flashed on the hexagonal projection screen behind him.)  And although he’s grown significantly more expressive and versatile as a singer, his overall affect remains resolutely flat.  (Though not un-self-aware: one of the shows’ funniest moments found him adopting a parodic, hilariously ill-fitting “rock singer” vocal style for “Rock ’n’ Roll Will Ruin Your Life,” although the song’s hypothetical “ten-minute guitar solo” – indicated in the lyric sheet – remained unrealized.) The staging didn’t help matters.  Merritt sat alone inside a sort of dollhouse, surrounded by a colorful array of “bibelots and bric-a-brac” (including numerous actual dollhouses and a stuffed owl he introduced as “my friend” Hootie), partitioned off from the other six musicians onstage (with whom he never interacted) by a five-panel folding screen.  I imagine that the set might have been designed for a more theater-like venue with different sightlines, as the screen’s plexiglass windows allowed us only fairly obstructed views of the musical goings-on.  Which was a shame, since the ensemble was clearly working hard to replicate the album’s vast array of nifty and obscure acoustic and electronic instruments: Joia tubes, Stroh violin, bowed psaltery, thunder sheet, omnichord, numerous synths of various vintages, both bowed and circular saws, etc. etc.  (Claudia Gonson, Merritt’s longtime partner-in-crime, was notably absent, significantly limiting the potential for This Is Your Life-style pageantry.)

While the screen was presumably devised in part to avoid triggering Merritt’s hyperacusis (a hearing sensitivity, mentioned in several of the 50 songs), it also gave the proceedings a very specific theatrical character, with the band as a semi-invisible pit orchestra and Merritt, pointedly, isolated at center-stage.  This setup was thematically appropriate in ways that became increasingly evident as the evenings unfolded, beginning with the song for 1971 (age six), which made a fitting keynote: “I Think I’ll Make Another World.”  (That song is followed by “Eye Contact,” which, in case you were wondering, is decidedly anti-.) Because indeed – despite my friend’s skepticism – these songs did reveal themselves a great deal in concert.  Or more precisely, the live context really cemented that, for the first time in Merritt’s career, what matters most with this project is not the songs themselves (witty and melodic though many of them are) but the larger picture they create together.  As a good autobiography should, the songs, taken collectively, explore and to a great extent explain how Merritt became the complex, idiosyncratic, convention-allergic man he is.

The ‘60s and ‘70s material, especially, created a striking impression of his highly unusual, peripatetic, fatherless childhood, spent shuffling from place to place (over thirty, he claimed, in his first twenty-three years; Hawaii, Vermont and Baden-Baden among them) with his mother, a habitual communard and omnivorous spiritual seeker, and her parade of unsavory boyfriends – all of which (along with his life-spanning litany of “Weird Diseases”) offered plenty of fodder for speculation into the roots of his asocial tendencies and other interpersonal eccentricities.  His new-wave 1980s adolescence, meanwhile, presented as an era of personal discovery mediated through electronic pop – as both a club-goer and a budding practitioner – formed an oddly triumphant second act with beeps to match, underscoring the musical predilections later borne out in his professional career.  Interspersed with these decidedly unconventional formative experiences were others that, if not exactly universal, felt more familiar – things that, one suspects, Stephin Merritt fans in particular might relate to: holing up in a snowstorm with a shelfful of pentasyllabic sci-fi novelists (“The Blizzard of ’78”); staging principled, esoteric arguments with college professors (“How I Failed Ethics“); sustaining untenably romantic rooming arrangements (“Me and Fred and Dave and Ted.”) And so it went on, into a young adulthood in the ‘90s characterized by depression, illness, poverty and heartbreak, and a rather less focused final act chronicling his shifting relationships to certain specific places (New York and Los Angeles) and other, much less explicitly specific people.  The second night’s material – that is, the latter half of the album – is understandably less direct and digestible (after all, one’s thirties and forties are a very different sort of life-stage) but it also suffers from some slippage toward the generic, even banal, in both content and form.  Still, even though some of the later numbers (“I’m Sad,” “Stupid Tears,” “Cold-Blooded Man,” “Lovers’ Lies”) might feel a bit lazy and/or evasive in the context of an autobiographical survey – these songs lack any clear personal detail to speak of, and could probably have fit in any old Magnetic Fields project – I actually found it all the more telling that he chose to include them anyway: touchingly indicative of the depth and ultimately unremarkable nature of his depression and romantic struggles (retroactively rendering much of his earlier work more poignant and personal than it ever seemed before), and also evidence of his all-too-human limitations as a confessionalist.

While it’s true that many of the same insights might be gleaned from simply listening to the record, encountering the songs in concert did make a substantial difference for me – even beyond the (not-insignificant) opportunity it offered to sit and really focus on them, and the helpful, sometimes revealing context provided by Merritt’s interstitial “lines.”  (Why is he singing about Ethan Frome?  Apparently, it’s because he read it during a year spent sick in bed after eating infested Babybel cheese.)  More importantly, though, the shows were a chance to truly contemplate this ordinary, extraordinary man, in the flesh; to consider the sweep of his life as he offered himself up to us with – I’m convinced – as little artifice as he is personally capable of.  (Even if, yes, the presentation was still miles away from, say, VH1 Storytellers.) Look: Merritt’s back-catalog, and 69 Love Songs in particular – his greatest work (if not necessarily his best album), which no one will ever surpass at its own game – was and remains a tremendous, bountiful gift.  It’s a gift that has made an impact on many lives, mine certainly included.  (For one thing, I can scarcely pick up a ukulele without starting to strum “With Whom To Dance,” or “Nothing Matters When We’re Dancing,” or “This Little Ukulele” – and I pick up a lot of ukes.)  But while he’s given us so much, he has all but withheld, until now, something that we as music fans so often crave (and sometimes feel, in our worst tendencies, that we deserve): a sense of personal connection and relation.  And while – as he once sang – honesty may not be his strong suit, he’s giving it an honest try here.  It may not be a masterpiece – he’s had enough of those, after all – but the project’s failures and shortcomings are ultimately just as compelling, and as truthful, as its successes. 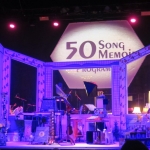 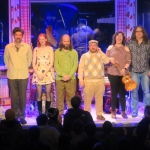 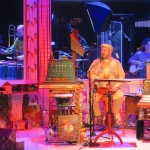 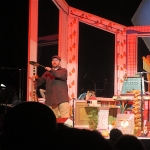 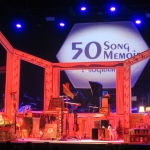 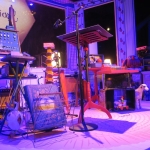 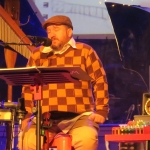 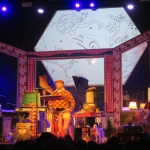 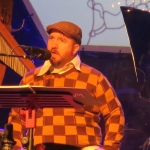 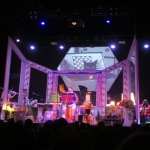