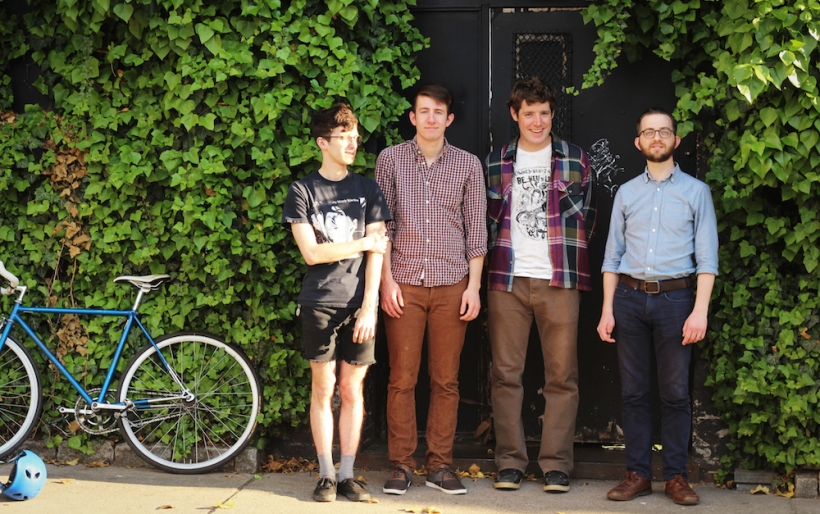 Spelling Reform | photo by Jonathan Brown | courtesy of the artist

Late last year local indie rockers Spelling Reform gave us a stand-out debut LP in No One’s Ever Changed, a record that The Key’s Chad Snyder tagged “optimistic bummer rock for the teenage soul” thanks to its relatable theme of trying to be your best self. “Tuscaloosa” is the third single Dan Wisniewski and co. are highlighting, and today we have the premiere of its Bob Sweeney-directed video.

Under a pink sky and storm-blue clouds, Wisniewski walks through parks and down rivers, hands in pockets, passing an assortment of bystanders engaging in some strange behaviors. He manages to ignore all the attempts of distraction (even a dancing dog) and stays focused on his thoughts of the future, until the interlopers surround him outside of an ivy-covered building (you may recognize the facade from the LP’s album art).

“There’s one line in ‘Tuscaloosa’ that repeats: ‘How to get your attention?’ In the video for the tune, we took that thought in a bizarre direction via a character who can’t be distracted by drifters peddling sandwiches in Fairmount Park, grown men dressed in monkey costumes and more. It’s a fun and weird video that asks, ‘What would it be like to meet someone who, purposefully or not, ignored you no matter what?'”

Catch Spelling Reform at Boot & Saddle on Wednesday, March 29th when they open for Middle Kids and Pilkington. Tickets and information for the 21+ show can be found here.