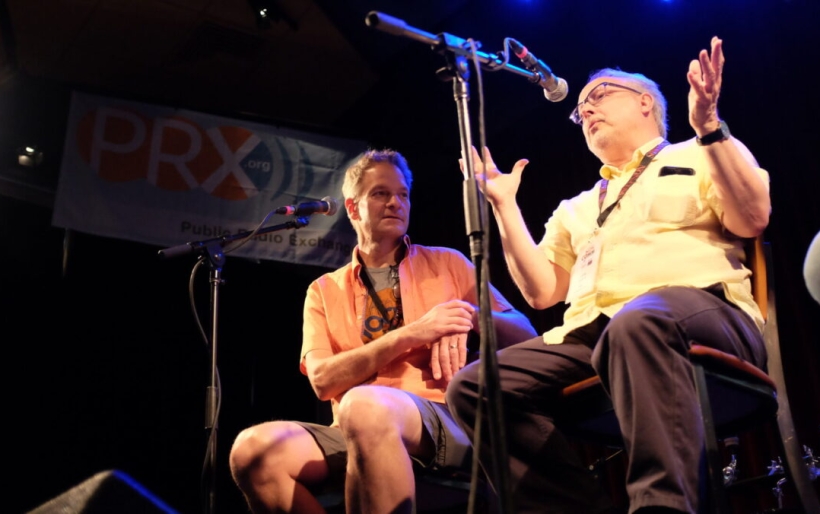 As Jim McGuinn of Minneapolis station The Current observed, “It used to be we just did radio. Then we had the website used to support the radio. And now it’s back and forth. It’s one of the fascinating aspects of the job I think.”

As new media platforms continue to grow and evolve, public radio needs to be more on top of their multimedia game then ever — and more specifically, on top of their digital media game. That was the theme of the opening panel at the NonCOMM-vention on Friday, where McGuinn was joined by John Barth of Public Radio Exchange to talk about how stations can adapt what they do.

Barth says he loves seeing stations experiment with digital-exclusive content and podcasting. “They may not know what they’re doing, but they’re tying, and that’s the first step,” he says.

Content like podcats should be driven by three factors, Barth said: an original voice, original content, and the sense that “you can only get it here.” “Don’t do what everybody else is doing,” he said.

McGuinn said digital content doesn’t need to be complicated either. “The quick hit stuff on Facebook Live is what’s getting really fast traffic. It doesn’t take hours and hours of production time. People just want that thing they can get to right away, and we’re moving towards that production model.”

The challenge is figuring where to be, and when, and how, and trying to leverage that experience, he continued, and not discounting the human element. “The surprising elements of curation are things you won’t get in a Spotify playlist,” he said. “Ella Fitzgerald next to Arcade Fire. That’s something no algorithm is going to find. It comes down to whats between the records, the hosts.”

McGuinn also reflected on the evolving role of the programming director in public media; “I’m like brand manager of the overall thing, but we have a very robust digital team. We have meetings to check back and forth on the content, how we can support each other.”

Barth added that stations need to embrace incoming workforce of digital natives who are looking to work in radio; “Stations need to realize they’re a magnet for the next generation of talent,” he said. “That’s going to be your future, so you may as well embrace it. If we turn them off at that stage, they’re never coming back to public radio. And that is a big mistake.”