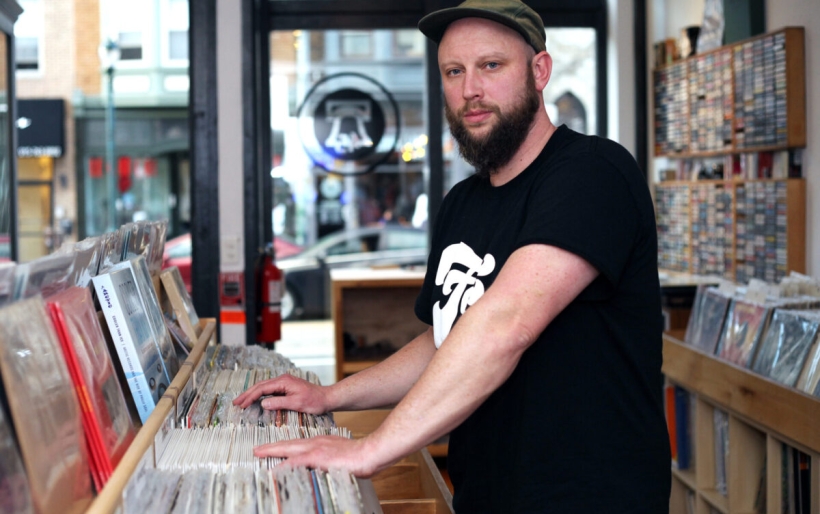 When Maxwell Ochester’s neighbor asked the then Mt. Airy teen’s parents if he could borrow him one weekend to work Brooklyn’s Roosevelt Record Swap, he probably didn’t know that he was changing a very small life. But he was. At the time, Max was hooked on records of the standard classic rock fare—Guns n’ Roses and Poison, for example. Hip hop, soul and funk were still a bit foreign to him. Foreigner was less so. But when Max got situated behind the booth at his first NYC swap, he found himself face-to-face with some of hip-hop’s biggest artists of that era.

“It just so happened that one of the first shows we did was this now super famous record show in New York where all the hip-hop artists from the early 90s were getting their samples from. So A Tribe Called Quest and Pete Rock & CL Smooth would all buy albums to sample for their records. So that’s how I got into it but I also got hooked right then. I was like, Oh my god, Q-tip is buying a record from me,” he remembers.

Today, that kid is 39 and he owns Brewerytown Beats, arguably the best record shop in the city of Philadelphia. And he wouldn’t have what he has, which includes approximately 20,0000 records and a coveted role as A&R and co-distributor for Jamie/Guyden Records, if it wasn’t for his experience at the swaps. “Watching Q-tip and Pete Rock and all these guys that I looked up to and the stuff that they would buy, I would really pay attention,” he says. “I used to watch what they would buy and then I’d listen to their music and try to dissect and find what kind of samples they were using for their music—and that’s how I got into it.”

He likely wouldn’t have his job with Jamie/Guyden Records, the iconic Philly soul label founded in 1954, if he didn’t have an ear for this type of thing. After reading a local blog, New Jersey-based Flea Market Funk, he came across a review of Jamie’s Cooler Than Ice: Arctic Records And The Rise Of Philly Soul box set. Upon reading, Max swiftly hit the send button on an admiring email to the Jamie team. That day, label president Frank Lipsius made the trek to the shop that day to meet with Max.

“He was like, ‘Okay, here’s the box set, it’s $75 wholesale, buy as many as you want.’ And I was like I can’t even buy one [laughs]…. so he went out to his car and came back and was like, ‘Here’s an open one for you to listen to and here’s a copy for the store, it if sells, let me know.’ He also gave me a one sheet of everything his company owns—all the highlights of the albums they own. I started looking at it and was like, holy shit. There were all these things that I had just recently found out about or knew was valuable for a long time.”

Pre-order the release and read our interview below with Max to learn more about his shop, the Jamie/Guyden collaboration and what it took to go from fired art handler at the Philadelphia Art Museum to the sole owner of Brewerytown’s greatest little musical antique shop. The Key: What year did you start Brewerytown Beats? Even if it wasn’t a brick-and-mortar yet, when and how did you really start selling records?

Maxwell Ochester: I worked at the Art Museum as an art handler and I didn’t like it but it looked good on my resume [laughs]. I got into some trouble for doing something stupid and I was like, “You know what? I’m done,” and they were like, “You know what? You’re fired.” It was a mutual agreement.

That was a Thursday, so I didn’t go to work that Friday. [At that point], I think I had 10,000 records in my basement. I had been talking to a developer in the neighborhood about a storefront, so I went to them that Friday and was just like, “Let me in.” We signed the lease, they gave me keys, and I set up Saturday and basically opened, and that was it. It was the end of 2013, I think.

TK: Had you ever owned your own business before?

MO: No, I never owned anything.

TK: You were already living in Brewerytown. Is that why you decided to start the shop here?

MO: I’m pretty outgoing and I kind of knew everybody and knew all the right places. I knew that the neighborhood was changing and wanted to get in on that wave. I was probably two years too early [laughs], but it’s finally starting to happen now.

North Philadelphia has always been historically middle-class black, and honestly, they have the best records. And so I’ve been in a countless number of houses North of Girard that have stacks and stacks and stacks of records. TK: How do you typically find new records?

MO: Usually, it’s clean out guys. Either they come into the store or someone comes into the shop with something, or it’s record shows and thrift stores.

Early on in the shop, I was having a horrible three days. Hardly nobody came in. By the third day I was depressed, tired and just like, this sucks. So I started drinking around noon.

By three in the afternoon, I was two 40s deep and I was wasted and this guy walks in with a box of shitty Glenn Miller cassettes. Just my luck. I was kind of upset and I was just like, “No I’m not going to buy your shitty cassettes.” He was like, “Alright, I’ll be right back” and came back with a box of 45s. This is my inexperience: I gave him $50 for the whole box, and there was probably 200 45s.

TK: Holy shit! So this guy had no idea what he was sitting on? TK: What was the name of the record?

MO: Honey and the Bees’ Dynamite Exploded. And Honey and the Bees is from the neighborhood, so this was kind of a pivotal point. Not only did I realize this shit goes for a lot of money, the people who made this stuff are still around.

Honey from Honey and the Bees is a woman named Ms. Felder, Nadine Felder, and I started talking to people in the neighborhood and found out that she was the secretary at the Brewerytown CDC. So one day I closed the shop and walked over and she was sitting at the front desk and I just said, “I love your music.” She was kind of taken aback. She’s since become a Jehovah’s Witness, so she doesn’t really talk about it anymore.

But it all started to click: these people are still here, and they’re still looking to get their music out. A lot of the record business and stuff that I deal with when I contact artists, they have a really bad taste in their mouth about that time because they never really got paid. Everybody thought they were going to be a superstar and then never really sold records. Everybody was hyping them up at their early, impressionable years, nothing ever really happened with it and now it’s very sought after. And then they hear these stories where it’s like, their record is selling for $500, you know?

TK: What do people say when you tell them that?

MO: The majority of them are angry at first. The first time is like, “Wow you recognize me? That’s really cool.” The second time is, “I got fucked. I really got screwed over in this deal, I was too young, they took advantage of me, they told me all this stuff that never happened.” And there are many, many stories like that.

[Laughs], yeah no, it’s not a money thing. In my head all the time I always go back to the Biggie lyrics: never get high on your own supply. And that’s definitely one of my problems. There’s stuff I’m looking for and if I come across it, I’m going to keep it. Hopefully if I’m lucky I come across a couple of copies, I keep the best one and I sell the rest. Some stuff is so rare, I’ve found stuff where there’s only 300 copies from the early ‘70s and if you come across one of those it’s very, very rare. So those things in particular, I’m trying to work with the artist to try to put them back out and reissue them so they’re accessible to more people. TK: Which is the big part of your role with Jamie/Guyden Records. What do you think Frank saw in you to bring you onto the team?

MO: They’ve always kind of done this—they’ve always given an opportunity to the smaller guy to do stuff, so that kind of fit in line with what we’re doing together.

TK: Did the man you bought the box of rare 45s off of ever show up again?

MO: I don’t remember who it was cuz I was…

TK: Because you were drunk from the ’40s?
MO: [laughs] …yeah.
TK: Maybe he was a guardian angel that just swooped in when you needed him.
MO: I think I did run into him at some point and I was like, “do you have any more?” and he was like, “I might have some.” And then I never heard from him again. I get a lot of that, too.